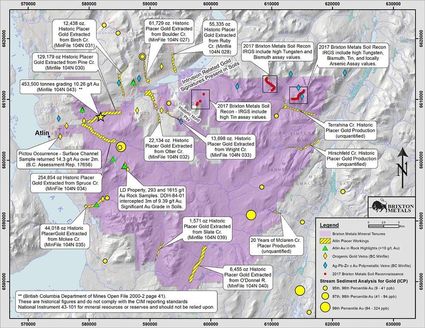 Brixton Metals Corp. April 18 announced the start of its first phase of 2019 exploration at the Atlin Goldfields project in northern British Columbia.

Over the past three years, Brixton has consolidated approximately 1,000 square kilometers (386 miles) of mineral claims covering most of the Atlin gold camp.

This large land package, which extends east from the community of Atlin, blankets an area that has produced more than 600,000 ounces of placer gold over the past 120 years.

In December, the Vancouver, B.C.-based explorer raised C$2.78 million, much of which will be applied toward this goal.

Brixton began its first phase of 2019 exploration with a 1,965 line-kilometer helicopter-borne magnetic geophysical survey, which will be used to map lithological contacts and major structures in the Pine Creek area of the property.

Nearly 130,000 oz of placer gold from Pine Creek and high-grade lode gold has been identified in the area.

Imperial, a past producing lode gold operation roughly 3,000 meters northwest of the Yellowjacket Mine, has a history that dates back to 1899.

The Pictou showing, situated about five kilometers southwest of Yellowjacket, is another gold prospect area with a long history.

Records going back to 1899 indicate that 29 meters of underground workings discovered gold-bearing quartz veins hosted in altered ultramafic rocks at Pictou. Homestake Minerals conducted exploration there from 1987 to1988 and reported grab samples ranging from 15 to 60 g/t gold. The best channel sample across the showing assayed 14.3 g/t gold over two meters. Chip sampling by Brixton of outcrop in the vicinity of the historical underground working returned 11.75 g/t, 4.41 g/t and 4.48 g/t gold.

Brixton has identified other areas across the Atlin Goldfields property with similar high-grade lode gold potential.

The LD showing, about 10 kilometers (six miles) southeast of Yellowjacket, is one such example.

Brixton geologists have collected grab samples from the LD area with up to 293 g/t gold.

The company plans to complete 3,000 meters of drilling at these four targets – Yellowjacket, Imperial, Pictou and LD.

The Yellowjacket expansion drilling will test geophysical structures between the Yellowjacket and Imperial deposits that do not have surface exposure. This total area is more than five square kilometers (1,235 acres) and this initial drilling will be a 'proof of concept' program aimed at discovery outside of the historic gold deposits.

At LD and Pictou, a series a short holes will test for vein continuity below historic trenches and to partially test gold-in-soil anomalies generated by Brixton last year.

Drilling is expected to get underway in June.

In the meantime, Brixton has begun on a new, 35-person exploration camp located at the Yellowjacket Mine in preparation for a busy field season that will also include:

• relogging of select historical core holes from the Yellowjacket zone.

CORRECTION: This article has been edited to state the correct location of the Atlin Goldfields project.