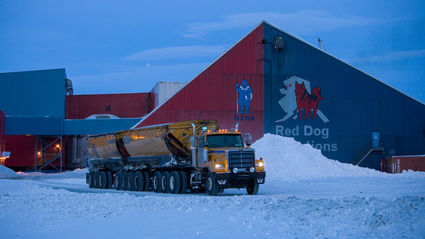 A truckload of concentrates leaves the Red Dog Mine to be delivered at a concentrate storage facility at the Delong Mountain Transport System port about 50 miles to the west.

Teck Resources Ltd. April 22 reported that extreme winter weather forced a closure of the Delong Mountain Transportation System road that connects the Red Dog Mine in Northwest Alaska to the concentrate storage facility at the port for an extended period during January and February. As a result, the concentrator at Red Dog was idled for 20 days due to limited concentrate storage capacity at the mine site.

In combination with lower zinc grades, which averaged 15 percent during the quarter compared to 16 percent during the same period last year, Red Dog zinc produced 110,200 metric tons (242.9 million pounds) of zinc during the first quarter. This is a 9 percent drop in zinc output from the mine in comparison to the first three months of 2018.

Operating costs at Red Dog were US$41 million during the first quarter, which is a US$5 million increase over last year.

Teck attributes these increased costs primarily to higher diesel prices and increased maintenance costs as some maintenance activities planned for later in the year were performed during the unplanned mill shutdown caused by the extreme winter weather.

Despite the disruptions due to extreme weather early this year, Teck has implemented a production recovery plan and does not expect a drop in full-year production at Red Dog.

Teck also reported that the US$110-million mill upgrade project it began at Red Dog late in 2017 remains on schedule for start-up early in 2020.

These enhancements are expected to increase average mill throughput at Red Dog by roughly 15 percent over the remaining mine life of the mine.

Based on 57.6 million metric tons of reserves averaging 13.6 percent (13.9 billion pounds) zinc and 3.9 percent (2.5 billion lb) lead, the Red Dog operation currently has enough ore to churn out zinc and lead until 2031.

To make up for the disruptions due to extreme weather early this year, Teck has implemented a production recovery plan and does not expect a drop in full-year zinc output at Red Dog.