Goodpaster gold exploration rush is on

An explosion of claims staked, royalties bought around Pogo North of 60 Mining News – May 24, 2019 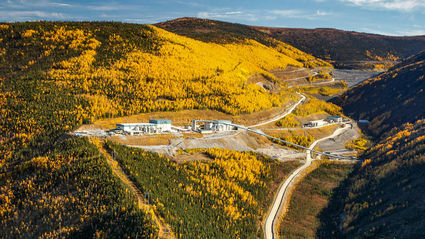 As Northern Star Resources discovers new zones of high-grade gold at Pogo, a number of other companies are staking claims, buying royalties and carrying out exploration in the Goodpaster district where the underground mine is located.

With at least five companies investing heavily in securing ground, acquiring royalties and drilling at and around the Pogo Mine, Goodpaster Mining District has emerged as the hottest destination for gold exploration in Alaska during 2019.

The US$30 million to US$40 million Australia-based Northern Star Resources Ltd. is investing in exploration at its newly acquired Pogo Mine alone would be enough to make Goodpaster the most explored district in Alaska this year.

"We've got 12 diamond drill rigs spinning on the property at the moment and it is fair to say it is popping up a lot of extra gold in that mine plan," Northern Star Resources Executive Chairman Bill Beament said during a May 10 Alaska Miners Association meeting in Anchorage.

The Northern Star founder sees Pogo, a high-grade underground operation that produces around 300,000 ounces of gold per year, as a foothold into what is becoming a much larger Alaska presence for the rapidly expanding Australian gold miner.

In addition to the Pogo property itself, Beament said Northern Star has cut a deal to buy Stone Boy, which includes several large exploration properties in the Goodpaster district owned by subsidiaries of Sumitomo Metal Mining (95 percent) and Sumitomo Corp. (5 percent).

"This is a district-scale camp that we got our hands on," Beament said. "It is very rare to discover and get your hands on those assets anywhere around the world, especially in places you want to live in, work in and come holiday in."

Beament's appraisal of Goodpaster is shared by a growing number of companies interested in the district that is now home to Alaska's largest gold producing mine.

This contingent includes at least one major gold producer, a successful and growing metals royalty company, a project generator that has long believed in Goodpaster's potential and a new exploration company led by executives that had great success in Yukon's famed White Gold District are joining the rush to explore this area.

Considering the enticing new high-grade gold discovery Northern Star has already made at Pogo, it is no surprise that gold companies are flocking to the Goodpaster district.

While much of the much of Northern Star's early focus was on underground drilling aimed at upgrading the underground reserves and resources ahead of mining at Pogo, the Perth-based miner is already investing heavily in exploring the larger potential of its newly acquired Interior Alaska property.

In fact, despite closing the deal for Pogo in the second half of 2018, Northern Star completed 44,792 meters of surface drilling last year, an exploration program that resulted in a major new discovery only about 800 meters from the underground workings at Pogo.

This discovery, referred to as Central Veins or Central Lodes, is a new vein system about 800 meters northwest of the Fun Zone underground development.

The 47 holes drilled into this discovery, known as Central Veins, last year encountered at least five stacked structures that are interpreted to be Liese-style veins that are offset from the currently mined area by a fault.

Earlier this year, Northern Star reported that drilling has outlined Central Veins over a strike length of about 650 meters and down-plunge for roughly 500 meters and the zone remains open in all directions. With four surface drills turning, the company continues to expand this enticing new discovery in 2019.

According to state permit applications, the company also plans to drill Goodpaster, an earlier staged gold discovery further north on the Pogo Mine property.

Core from these mineralized intercepts at Goodpaster looks identical to Liese, providing evidence that the two zones may have once been contiguous and have since been separated by a fault that runs between them along the Goodpaster River and geophysics indicates that this mineralization could extend off the Pogo property to the west.

With the acquisition of Stone Boy, Northern Star has significantly expanded its foothold and exploration potential in the wider Goodpaster district.

Millrock Resources Inc., a project generating mineral exploration company that has long believed that there are more gold mines to be discovered in the Goodpaster Mining District, has pulled together a large portfolio of mining claims covering some of the most prospective gold exploration ground around the Pogo Mine property.

In April, the company announced the staking of three claim blocks in Goodpaster, expanding its Pogo area portfolio to roughly 140,400 acres.

"We have amassed a dominant land position and intend to do our best to discover one or more gold deposits on the claims we have staked," Millrock Resources President and CEO Greg Beischer said at the time.

More information on these blocks can be found at Millrock amasses Pogo area gold claims in the May 1 edition of North of 60 Mining News.

On May 22, Millrock announced that it has further expanded its landholding in the Goodpaster with the staking two new claim blocks – North Pogo and Divide – increasing the company's Pogo area land position to around 163,213 acres.

North Pogo covers a largely overlooked area of favorable structures and stratigraphy on the north side of the Goodpaster Batholith, a large igneous intrusion that provided the mineralized fluids responsible for depositing the gold being mined at Pogo.

"It is surprising that there has been so little exploration conducted over what we now call the North Pogo project," said Millrock Resources Senior Project Geologist Chris Van Treeck. "If Goodpaster Batholith-related plutons can produce the gold deposit currently being mined at Pogo on the batholith's south side, there is equal potential to form gold deposits on the north side. We see great structural preparation of the rocks at North Pogo. The Alaska Division of Geological and Geophysical Surveys has mapped low-angle faults within the Millrock claim block and the Pogo Gold Mine is hosted in a similar, regional, low-angle structure."

In addition to North Pogo, Millrock has staked Divide, a block of 67 claims covering gold occurrences and interesting geochemical anomalies about 25 miles southeast of the Pogo Mine.

The company identified the gold potential at Divide from an extensive geological database from nearly two decades of Goodpaster district exploration carried out by Anglogold-Ashanti and International Tower Hill Mines.

Millrock obtained this data as part of a larger 2015 deal with Corvus Gold Corp. that included the West Pogo claims.

The Divide claim block is adjacent to the Tibbs property being explored by Tectonic Metals Inc., a new Vancouver-based junior led by former executives of Kaminak Gold Corp., the company that advanced the Coffee Gold project in the Yukon from a grassroots discovery to a roughly 5-million-ounce gold mine project that Goldcorp Inc. (now Newmont Goldcorp) acquired in 2017 for C$520 million.

"It is good to see that the successful Yukon explorers are now recognizing there is great potential on the Alaska side of the Tintina Gold Province, and the Goodpaster Mining District in particular," said Beischer.

Further details on Tectonic Metals can be found at Tectonic has big 2019 plans for Alaska.

Ink, one of the blocks of Stone Boy properties now owned by Northern Star; and Newmont Goldcorp's Healy claim block, which is being explored by Northway Resources Corp., a new Vancouver-based junior company, are also found in the same area of the Goodpaster district as Divide.

Beischer said this renewed interest in Goodpaster is exciting for the region and his company, which has long held that there is more to the district than Pogo.

"With increased exploration activity gold deposit discoveries are more likely, and this will benefit all of Alaska, as well as Millrock shareholders," he said.

Millrock's ability to substantially expand its Goodpaster portfolio this year is due largely to a C$1 million investment by EMX Royalty Corp., a company that has found success in generating royalties through low-cost property acquisition and early-stage exploration.

As part of the financing that saw EMX acquire 7.14 million Millrock shares plus warrants to acquire further equity in the project generator, Millrock is granting EMX Royalty interests on claims in the Goodpaster district.

"We are pleased to collaborate with EMX to maximize our chances of finding gold ore bodies," Beischer said in April.

Millrock-owned claims are not the only properties in Alaska EMX holds royalties on.

In a deal announced on May 21, the royalty company with offices in Colorado and British Columbia announced that it is investing C$350,000 to acquire royalty interests Corvus Gold Inc. has on properties in Alaska.

The deal with Corvus includes net smelter return (NSR) royalty interests on three groups of claims in Goodpaster District and a copper-gold property in the Chistochina Mining District, about 75 miles southeast of Goodpaster.

This includes the acquisition of two thirds of Corvus' NSR on the West Pogo (WPX) claim block.

EMX said these WPX royalties being purchased from Corvus complements the West Pogo royalties it recently acquired from Millrock.

EMX is also acquiring Corvus' 3 percent NSR royalty on precious metals and 1 percent NSR on base metals at the LMS claims, a gold exploration property about 20 miles southwest of West Pogo.

In its 2015 agreement with Millrock, Corvus retained rights to a 1 NSR royalty on any properties Millrock staked within a defined area of interest in the Goodpaster Mining District. As part of its deal with Corvus, EMX also acquired these royalty rights, which covers grounds recently staked by Millrock. 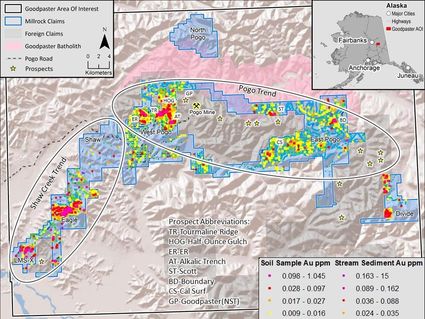 Millrock Resources has significantly expanded its portfolio of properties in the Goodpaster district.

Including royalties granted from its deal with Millrock, EMX will hold a combined 1.5 percent NSR on the newly stake claims in area of interest the companies have agreed upon in the Goodpaster district.

In addition to royalties in the Goodpaster district, EMX has agreed to acquire Corvus' 1 percent NSR on precious and base metals at Chisna, a copper-gold project Millrock acquired from Corvus in 2016.

With these royalty purchases, EMX is positioned to benefit from the development of more mines in what is currently Alaska's hottest gold exploration district.

CORRECTION: The name of the company exploring the Healy claim block has been changed to "Northway Resources Corp., a new Vancouver-based junior company."