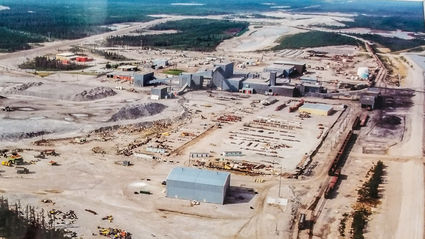 The town of Pine Point was established in the 1960s to provide a community for the workers at Cominco's zinc mine near Hay River, Northwest Territories.

Like many single-industry towns, once the well dries up, people seek greener pastures. However, the residents of a place many probably have never even heard of hold on to the remnants of their past. For them, it was an important and irreplaceable land, it was their home.

Pine Point, Northwest Territories, was a town located 10 kilometers (6 miles) inland from the south shore of Great Slave Lake and 87 kilometers (54 miles) east of Hay River. Cominco Ltd. (now Teck Resources Ltd.) explored the area around Pine Point as early as 1929 but it wouldn't be for at least thirty years until development would begin and the plans for a settlement established.

Cominco built its own townsite which became known as Pine Point. It became a territorial settlement with private businesses and boasted a population of nearly 2,000 at its peak. By the mid-1980s depressed prices caused economic difficulties for the mine. Cominco shut down operations in the summer of 1987, although it continued to mill until the following spring.

Most industry towns, after losing their purpose, attempt resurrections, reinventions or just slowly wither away. By 1989, however, Pine Point was erased entirely, rail spur removed and the site reclaimed.

In the end, the zinc mining town was left standing just long enough for a single generation to run through it.

The Pine Point ore deposit was discovered in the late 19th Century by fur traders at Fort Resolution who learned of the lead ores from the natives.

The discovery of lead-zinc deposits near Pine Point was closely related to the Klondike Gold Rush.

Prospectors heading overland to the Yukon met a party of Dené, First Nation people who inhabit the northern boreal and Arctic regions of Canada, who had musket bullets and fish weights fashioned from local metal.

A minor staking rush occurred in 1898 when Klondike prospectors heard rumors of silver at the location. There was no silver to be found, and although the lead and zinc ore was very rich, it was not feasible to mine the isolated deposit without good transportation to the south.

Originally the metal deposits were considered uneconomic because they lacked silver. But in the early 1920s the deposits began to attract attention for their lead-zinc content alone.

The first major exploration work was done in 1929 when several short shafts were sunk and a churn drill was brought to the area to drill into the rich ores. That work was halted by the Great Depression.

Geological investigation by Cominco after World War II led to new theories of how the ore deposits were hosted, and by 1955 an extensive exploration program had outlined several thousand tons of ore along a 20-kilometer (12 miles) belt.

In 1948, Cominco began another major exploration work, using the Mississippi-Valley-type model to guide exploration. In the early 1960s, Cominco advanced the project to construction which included a railroad, hydro-electric dam and a town where up to 2,000 people could live.

At the time of construction, the mine was heralded as a catalyst for an economically depressed region, and the federal government poured nearly $100 million in subsidies for infrastructure to support the mine. This included construction of the Great Slave Lake Railway from northern Alberta to the southern shores of Great Slave Lake to transport ore from Pine Point to the Cominco smelter in Trail, B.C.

Over the three decades since Cominco moved on, the mine and town of Pine Point has basically disappeared.

Pine Point now presents a remarkable landscape – shorn of all buildings, all that remains of the former town of 2,000 are cracked streets and sidewalks. Similarly, the mine operation has been dismantled, leaving behind a lone powerline and an extensive landscape of open pits, waste piles and haul roads. The once productive landscape is derelict, slowly being recolonized by vegetation and animals.

Today, a global shortage of zinc has spurred new interest in Pine Point and the lodes of zinc that remain under and around the abandoned town are being revisited as viable sites to begin operations once again.

Due to the previous operations, the feasibility of the mine has a pleasant windfall. The skeletal remains of Pine Point present a unique opportunity for lowered costs and convenient establishment of a new mine to help fill a shortage of zinc. The previous infrastructure has already laid the groundwork for development and should significantly help to lower costs of the potential project.

In 2006, Tamerlane Ventures Inc. purchased the Pine Point property in the hopes of restarting the operation. The effort failed due to low metal prices and the company filed for bankruptcy.

In a deal valued at around C$8 million, Darnley Bay Resources Ltd. purchased Pine Point out of receivership in 2016. The company had plans to invest C$154 million into resuming operations at the shuttered mine. The company highlighted cost savings from the nearby highway and railroad constructed previously for the mine in the 1980s, as well as the electricity generated from the hydroelectric project from Taltson River.

During the transition of the project from Tamerlane to Darnley, zinc prices had soared to US$1.18 per lb.

"It's a good time to finance a project like this," Darnley Bay Resources Executive Chairman Kerry Knoll said in 2017.

Darnley Bay had been exploring an enormous gravity anomaly near the town of Paulatuk, Northwest Territories for years, but had not been able to raise the capital to fund it. Knoll said restarting Pine Point could be a "springboard" to getting that other project moving.

To that end, it helped that there were already proven resources in the ground at Pine Point.

Once Canada's most profitable lead-zinc mine, Pine Point produced nearly 64 million metric tons of ore from 52 deposits between 1964 and 1987. Another 46 deposits on the property were found but never put into production.

"When Cominco left in the late 1980s, they left a number of deposits behind that they considered too low grade, and they had other projects to mine instead," said Knoll. "Leaving them behind gives us a relatively good head start towards building a mine."

According to a news release from Darnley Bay, "the former producing Pine Point assets contain 42 known lead-zinc deposits over a strike length of approximately 68 kilometers (42 miles)."

By mid-2017 Darnley Bay Resources changed their name to Pine Point Mining Limited so it could be inferred just how much they were hedging their bets into the project.

The newly minted Pine Point Mining completed a preliminary economic assessment of the project that outlined a 13-year mine life with total life-of-mine production of 1.35 billion lb zinc and 536 million lb lead.

In February 2018, Osisko Metals Inc. acquired Pine Point Mining to continue the pursuit of developing a mine at the Pine Point lead-zinc ore deposit.

The acquisition aligns with Osisko's strategy of consolidating and developing base metal assets at the mining district scale.

"We are pleased to have concluded the transaction with Pine Point, allowing Osisko Metals to advance its goal of becoming a leading base metal mining company in Canada," said Osisko Metals President and CEO Jeff Hussey.

Hussey says that advancing zinc projects "during a period of exceptional supply and demand fundamentals for zinc, when the price is ranging between US$1.40 and US$1.50, with forecasts that it will go higher until 2020," adds appeal to the business combination.

"It's a whole new day for these mining camps with the new supply and demand fundamentals, and the higher price range for zinc. We want to re-enter these camps and develop an economic resource base as quickly as possible."

Osisko can grow the resource by converting historic resources and finding more mineralization on the property.

"There are an additional 50 million tonnes in historical resources hosted in roughly 36 deposits that were left undeveloped from the Cominco days, so that creates great upside for the project to increase the resource base," Hussey says in an interview. "That's the value creation proposal in front of us."

The current zinc prices can be seen to be driving this campaign by Osisko and the prospective gains are evident. It was seen by Pine Point Mining and the acquisition by Osisko further solidifies the results.

So, what does this all mean for Pine Point?

In my research into the history of Pine Point I've found that there is a true love and nostalgia for the single generation home of nearly 2,000 people. There is a website dedicated to preserving the memories and locales of this fleeting town and several other forms of content with the purpose of keeping it alive.

The endeavors of reinvigorating the historical mine sites has already set in motion plans to reestablish the infrastructure and perhaps will bring about the return of Pine Point.

With the global shortage of zinc, the wealth has increased to a very alluring price. This will bring jobs and development and at least create a foundation for putting Pine Point back on the map.

As for the one-time residents, only the future will be able to tell if they may once more walk among their childhood home. 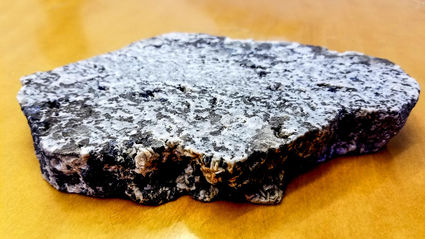 A sample of the high-grade zinc mineralization that could write a new chapter for historic Pine Point, Northwest Territories.