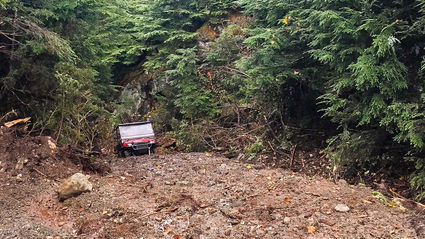 During a preliminary program carried out in December, Decade Resources collected a rock sample from the Crest property near Hyder that contained 65.4 ounces per metric ton gold and 13.2 oz/t silver.

Decade Resources Ltd. May 2 announced results from sampling completed at its recently acquired Crest gold property near the town of Hyder in Southeast Alaska.

Lying just across the border from British Columbia's Golden Triangle region, the Crest property is adjacent to Ascot Resources' Premier gold-silver mine property on the Canadian side of the border.

Due to the lack of snow at lower elevations in the Stewart-Hyder area in December, Decade was able to carry out preliminary silt and float rock sampling in stream beds along the Granduc Road which crosses the property.

The five silt samples collected returned up to 0.224 grams per metric ton gold, which is considered highly anomalous in silt.

High-grade gold mineralization was identified at Crest roughly a century ago and is described in a 1929 United States Geological Survey bulletin, "Geology of Hyder and Southeastern Alaska."

According to A. F. Buddington, author of the bulletin, a northwest trending quartz-sulfide vein is present on the property.

The figures in Buddington's report were calculated in the US$20 per ounce gold price of the time. These bonanza grade values, however, have not been confirmed with modern exploration.

During the 2019 field season, Decade Resources plans further sampling to locate the source of the rocks it collected in December, as well as evaluate the total property.