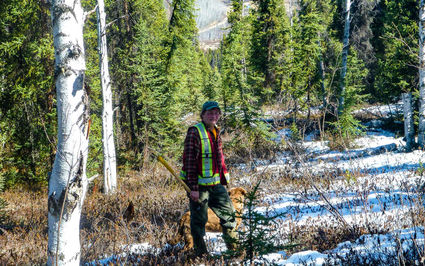 Klondike Gold President and CEO Peter Tallman explores for the lode sources of the 20 million ounces of placer gold recovered from the streams in Yukon's famed Klondike.

Klondike Gold Corp. May 16 announced the start of a C$2 million exploration program on its Klondike District property, 563-square-kilometer (217 square miles) land package that covers the hills above the legendary Yukon creeks that have produced more than 20 million ounces of placer gold since 1898.

Klondike's 2019 is slated to include approximately 6,000 meters of drilling at the Lone Star, Gay Gulch and Nugget zones; collection of 2,000 soil samples in the area of the legendary Eldorado and Bonanza creeks; GT Probe sampling to test extensions of the Lone Star zone; and an airborne Lidar (light detection and ranging) survey to help identify the surface position of potentially gold mineralized faults.

Drilling at Gay Gulch and Nugget is being targeted to test areas adjacent to where 2015 to 2018 drilling encountered grades exceeding 20 grams per metric ton gold.

Drilling at Lone Star will focus on expanding a wider zone of disseminated gold mineralization along strike of this lode gold zone that lies above the confluence of the celebrated Bonanza and Eldorado creeks.

Intercepts such as the 65.05 meters of 1.4 g/t gold and 26.2 meters of 1.33 g/t gold drilled last year are examples of the widths and grades being targeted at Lone Star.

The Bonanza and Eldorado Creek area sampling will focus on prospective trends of the Nugget and Eldorado faults, which includes Gay Gulch. Klondike Gold already has data from more than 20 small overlapping historical soil surveys, most carried out in 1980s, covering this area. The company, however, said the reproducibility of this data has been low and the reliability poor. The planned 2019 survey, which will use modern and consistent methodology to cover the core area of gold mineralization, is expected to expand the footprint of known anomalous areas and may detect new anomalies for follow-up.

Klondike Gold will also utilize a GT Probe – a track-mounted sampling rig developed by Dawson City-based GroundTruth Exploration – to collect roughly 350 bedrock samples to test the eastern extension of Lone Star. Able to drive a casing through the overburden to bedrock, the GT Probe can collect samples from the top of bedrock with minimal ground disturbance. 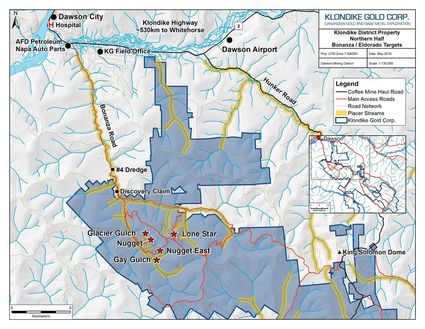 The imaging results from the Lidar survey is expected to refine the Klondike exploration model and potentially generate new drill targets by identifying the surface position of potentially gold-prospective faults among non-mineralized faults. Once the results from the airborne survey are received, the company plans to follow-up on targets identified in the Eldorado, Nugget, and Bonanza fault areas.