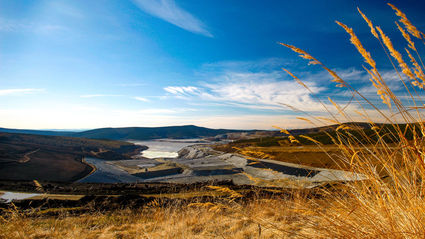 Fort Knox is a prime example of the suite of critical elements – arsenic, antimony, bismuth, tellurium and tungsten – associated with intrusive-related gold deposits in Alaska.

Since the stampedes of prospectors trekked North in the latter half of the 19th Century, the lure of Alaska's rich gold lodes has drawn dreamers and miners North. Today, four hardrock mines and hundreds of family-run placer operations across the Last Frontier churn out roughly 1 million ounces of this alluring precious metal each year – and the largest stores of aurum discovered here have yet to be realized.

Despite being a relatively rare metal that has served as a currency for more than 5,000 years and possessing many unique attributes that make it invaluable to modern technology, gold is not on the list of minerals considered critical to the United States.

This precious metal, however, could serve as a pathfinder element for several of the other minerals and metals the United States Geological Survey has listed as critical to America.

This is because where you find gold in Alaska you typically find some mix of six of the metals that did make it onto the USGS list – antimony, arsenic, bismuth, tellurium, tin and tungsten.

Most geologists throughout Alaska's relatively short mining history think about this suite of critical minerals as a signature for finding the world-class deposits of gold for which Alaska is renowned.

Even enormous stores of gold, such as the 40-million-oz Donlin Gold deposit in Southwest Alaska, can be tough to find by just relying on looking for gold on the surface.

For this reason, geologists seeking similarly large lodes of gold look for traces of antimony, arsenic, bismuth, molybdenum, tellurium, tin and tungsten, elements that travel with gold but are easier to find in the soils lying over multi-million-oz gold deposits.

Reversing this typical line of thinking, geologists seeking an economic deposit of any one of these critical minerals can take a look at the rich deposits of hardrock and placer gold turned up by the explorers that came before them.

While gold is found across Alaska's entire vast landscape, with the exception of the oil-rich plains of the North Slope, the Tintina Gold Belt – a 125- by 750-mile gold-rich province that arcs across the middle of the state – is particularly well endowed with large intrusion-related gold systems and critical minerals associated with them.

Kinross Gold Corp.'s Fort Knox Mine a few miles north of Fairbanks is a textbook example of the intrusion-related gold systems typical of the Tintina Belt and the potential to find deposits of critical minerals nearby.

While Fort Knox is a low-grade gold deposit, it is large and has been a profitable mine in Kinross Gold Corp.'s portfolio since production began there in 1996. So far, this operation has churned out 8 million oz of gold and has enough ore to keep the mine operating until at least 2030.

Bismuth, tellurium and tungsten are typically found right over the deposit, while arsenic and antimony become more predominant as you get further away.

This is the case for Fort Knox.

"The quartz contains gold, scheelite (a tungsten mineral), bismuthinite (a bismuth mineral), and according to assay some mineral containing tellurium," L.M. Prindle wrote in 1916 of samples taken from what would 80 years later be the Fort Knox Mine.

"It's a shame Kinross never installed a heavy mineral circuit in their Fort Knox mill to catch the bismuthinite and scheelite and wolframite that was known in the area since at least Prindle's 1916 USGS report," James Barker, who investigated much of Alaska's critical minerals potential while working as a geologist for the U.S. Bureau of Mines, told Mining News.

Distal deposits of antimony and tungsten, often containing bismuth, however, have been mined when demand for these critical metals pushed the price high enough.

Today, Barker is the project manager for Treasure Creek Partnership, a company that is exploring the gold potential of a land package that blankets this antimony-gold trend a few miles west of the Fort Knox Mine.

The same pathfinders that led to the discovery of these Interior Alaska gold mines apply to find other aurum deposits across the Tintina Gold Belt and beyond.

Many of Alaska's most prolific placer gold producing regions, such as the Circle and Manley Hot Springs districts in Interior, also happen to be rich in tin. This relationship, however, has more to do with meteorology than geology. 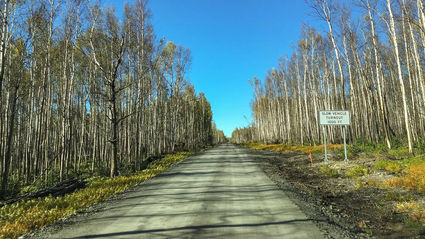 Completed in 2016, this road to the community of Tanana on the Yukon River cuts through the gold- and tin-rich Tofty region of Interior Alaska.