Before the Klondike there was Forty Mile 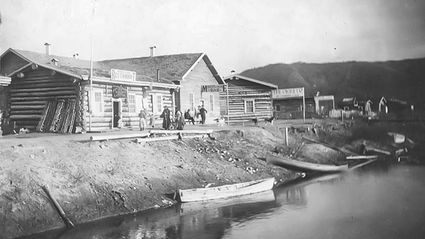 Restaurants and bars along First Avenue at Forty Mile in 1898.

There are many mine sites, towns and claims that invoke familiarity and prestige in the minds of present-day prospectors, but probably none as famous as the Klondike.

Klondike, and the Yukon Territory where it is found, are intrinsically linked to the Gold Rush that began the long endeavors of countless people in striving towards dreams filled with riches and comfort. As many know, these efforts wouldn't always pay off and the sweat and tears of these daring individuals paved the way for future generations to stake their gold claims. But like all claims, the Yukon Gold Rush story starts with a "Discovery."

The oldest town in Canada's Yukon, Forty Mile, has a rich history comparative to its yield. It was here that a group of pioneers built a town that led to the Discovery claim on the Fortymile River – an event that sparked a series of gold rushes that would lure thousands hoping to "strike it rich."

The same allure of gold that drew prospectors to Forty Mile, however, enticed them away to Circle City, the Klondike and Nome as they followed their insatiable urge with a hungering spirit.

At the confluence of two major rivers – Fortymile and Yukon – lies the historic settlement of Forty Mile, a nearly forgotten outpost where the great Yukon and Alaska gold rushes were set in motion.

Established in 1886, Forty Mile became a mining center ten years before the Klondike Gold Rush and the building of Dawson City.

The site has a much longer history, however, as a harvest area used by First Nations for generations.

The Fortymile River begins in Alaska and, with its great network of tributaries, drains an area of 1,830 square kilometers (706 square miles) that First Nations people have come to hunt, fish, trade and visit for more than 2,000 years.

Where the Fortymile dumps into the Yukon was one of the major fall river-crossing points of the Fortymile caribou herd. Hunters would intercept the herd here as it crossed the Yukon River.

Although this was not the location of the first encounter between local First Nations people and non-natives, it is the place where Hän-speaking people had their first extended interactions with European culture.

It is also where the beckoning call of gold first sounded, drawing tens of thousands North to find their fortunes in Yukon and Alaska.

In 1871, Jack McQuesten and Alfred Mayo had a fortunate meeting with Arthur Harper and Frederick Hart at the mouth of the Nelson River in British Columbia. After learning about the U.S. purchase of Alaska, these two groups of gold prospectors decided to go and explore the new territory.

Three years later, McQuesten and Mayo had established Fort Reliance, an Alaska Commercial Company trading post on the banks of the Yukon River about six miles below present-day Dawson City. The two men spent the next eight years setting up and operating ACC trading posts along the Yukon. Fort Reliance became the center of activity in the area.

In the mid-1880s prospectors discovered gold on the Fortymile River, which got its name from the estimated distance downstream the river flowed into the Yukon.

While the headwaters of the Fortymile lie within Canada, the river's southerly course crosses the Alaska border before arcing northwards again to flow back to Canada. Such a wayward passage resulted in some confusion after the gold discovery as most of the diggings at Bonanza Bar, Franklin, Chicken, Jack Wade, and Steel Creek lay within Alaska while the community of Forty Mile was within the Yukon.

A man by the name of Howard Franklin is actually given credit for the initial Fortymile discovery, but several other pioneers were on hand to share in the bounty. The great news of the gold strike reached the coast in dramatic fashion. Anticipating an influx of miners to the northern gold discoveries, trader Harper prepared to move the ACC pioneer store from Fort Nelson on the Stewart River in British Columbia to the Fortymile mouth.

It was in 1886 when McQuesten, now known as the "Father of the Yukon," Captain Mayo and Harper, recognized as the first man to enter the Yukon in search of gold, established an outpost at Forty Mile.

The Yukon's first mission school was established in 1887 by the Anglican Church. That same year, North-West Mounted Police Inspector Charles Constantine established the Yukon's first police detachment. It is also likely that the Forty Mile farm was the site of the first agriculture in the Yukon.

By 1895 over $400,000 worth of gold was extracted from the Fortymile region, as well as the Miller Creek deposits in the nearby Sixtymile district. At this time the number of people living in and around the town of Forty Mile numbered about 1,000.

Today, only a handful of buildings remain.

The downfall of Forty Mile began with a letter a local Bishop wrote to the Canadian government in Ottawa, complaining that the loose morals of the miners there were corrupting the local Natives.

At about the same time, businessmen John Healy had built Fort Cudahy for the North American Transportation and Trading Company across the river next to Forty Mile.

In response to the pleas of the Bishop and Healy, Inspector Constantine returned to the Yukon with a fellow North-West Mounted Police Sergeant in 1894 to determine the situation, affirm Canadian sovereignty over the Yukon and collect customs duties from miners leaving the country.

Constantine returned a year later with a detachment of 20 men and established Fort Constantine.

The arrival of the Mounties put an abrupt end to the miners' meetings and vigilante justice. The Mounties also collected liquor taxes, customs duties and they didn't put up with any nonsense from troublemakers. It cramped the miners' freedom and for the first time began to set the Yukon apart from its American neighbor.

By the time these events occurred, Forty Mile had competition. A richer gold strike had been made in Alaska's Birch Creek district (later known as the Circle Mining District), about 150 miles (240 kilometers) down the Yukon.

McQuesten built a post to supply the miners at the new town of Circle City, a Yukon River outpost near Birch Creek named for its location near the Arctic Circle.

McQuesten grubstaked on credit. Back in Fort Cudahy, John Healy would not.

This willingness to outfit prospectors seeking the rich gold of the new Alaska district drew miners away from Forty Mile and in less than a year Circle City had climbed to a population of 700.

Alaska was not Forty Mile's only competition.

About 50 miles (80 kilometers) southeast, several famous prospectors and pioneers such as George Carmack, Skookum Jim and Dawson Charlie began to pole their boat up the Klondike River to Rabbit (Bonanza) Creek, panning for gold in the shallows as they went.

Once word of these prospectors' rich gold discoveries on Bonanza Creek made its way south, sparking the Klondike Gold Rush, the newly established Dawson City climbed to a population of 30,000 within two years.

By 1899, Forty Mile, once the region's principal community, was virtually abandoned.

The North-West Mounted Police, however, manned their outpost across the Fortymile River. These last residents of the once thriving town served as customs agents, ensuring duties were paid on gold being transported down the Yukon and out of Canada. If a traveler passed the Mounty outpost without stopping, a small detachment under canvas downstream would intercept the vessel and search it.

The Forty Mile post was shut down in 1929 when Ottawa decided to limit the outposts and use postmasters as customs collectors, they too finally left the town around 1938.

An agreement ratified by Tr'ondëk Hwëch'in First Nation's membership in 1998, specified that the Forty Mile, Fort Constantine and Fort Cudahy Historic Site would be co-owned and co-managed by the Tr'ondëk Hwëch'in and Yukon governments.

Since that time, archaeological investigations, archival and oral history research, and building stabilization and preservation have been carried out at the site.

In 2006, the two governments signed a management plan at a ceremony and celebration hosted at Forty Mile by Tr'ondëk Hwëch'in and Yukon Historic Sites Unit.

Since the construction of a road to Clinton Creek from the Top of the World Highway in the late 1960s, Forty Mile has been accessible by road, and is about a 60-mile (97 kilometers) drive from the famous Klondike town of Dawson City.

Most visitors, however, opt to visit Forty Mile by water, either traveling the 48 miles (77 kilometers) downriver from Dawson City or motoring up the Yukon River from Alaska. 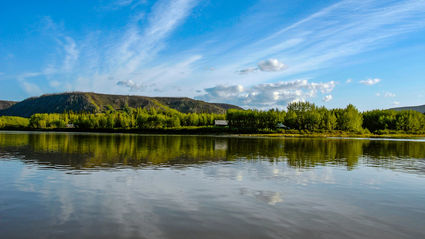 A traveler photographs the few remaining buildings at the historic Forty Mile site from their boat on the Yukon River.

Either route takes a visitor back in time to a place were pioneers traded goods and stories before the rest of the world knew about the rich Fortymile, Birch Creek or Klondike gold districts.