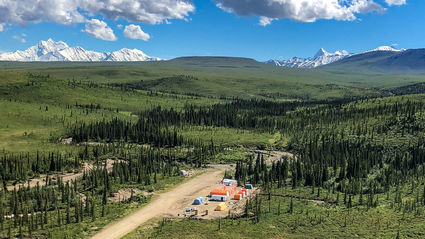 This camp at Newman's Creek in the northeast section of the Red Mountain property is the base of operations for the exploration White Rock Minerals and Sandfire Resources is carrying out across this 183-square-mile zinc-enriched project.

White Rock Minerals Ltd. June 24 provided an update on the 2019 exploration program it is carrying out with joint venture partner Sandfire Resources NL to discover the next high-grade zinc and precious metals deposit on the Red Mountain volcanogenic massive sulfide property in Interior Alaska.

"The agreed exploration strategy with our JV partner Sandfire is to test away from the known high-grade deposits in pursuit of the next big deposit. This sees our activities testing many of the more regional targets identified from our work last year, and our current activities," said White Rock Minerals Managing Director Matthew Gill.

CSAMT (controlled-source audio-frequency magnetotellurics) is a geophysical survey that proved to be successful in identifying zinc-rich VMS occurrences, such as the Hunter target discovered at Red Mountain last year.

A line of MT (magnetotellurics) carried out this year has proven effective in mapping the depths of prospective horizons between the high-grade West Tundra Flats and Dry Creek deposits. This technique has shown that the prospective hinge zone is much shallower than first interpreted. The MT line also contains a strong conductor along strike from the West Tundra Flats deposit for further follow-up field reconnaissance, sampling, additional electrical geophysics and modelling, prior to finalizing a drill target.

The surface geological reconnaissance and geochemical sampling is being carried out across two main prospect trends: Glacier, a newly identified alteration zone running 10 kilometers (six miles) across the northern part of the property, and Dry Creek, a trend extending west from the Dry Creek deposit that includes Hunter and other prospects identified last year.

Prospecting of Glacier Trend has identified sulfide accumulations, chert and iron formations, all believed to be proximal to horizons prospective for base metal-rich massive sulfides.

Arete, a prospect turned up from this work, is being investigated further.

"We have already identified a drill target at the Arete prospect in just the first few weeks of our current activities. This is a great credit to our team on the ground," Gill said.

To refine the drill targets, crews are carrying out initial ground CSAMT geophysics at the prospect.

Drilling of the Arete and other targets along the Glacier Trend is scheduled to begin in late June.

In the meantime, drills are turning along the Dry Creek trend. The first three holes, however, have not cut the large zones of VMS mineralization White Rock and Sandfire are seeking.

The first drill hole, WT19-30, tested a prospective horizon roughly 2,000 meters west of the West Tundra Flats deposit. Drilling did not intersect any visual base metal mineralization associated with the surface geochemical anomalism and coincident CSAMT conductivity feature identified here. A downhole electromagnetic survey, however, did detect an off-hole conductivity anomaly that will be modelled ahead of possible follow-up drill testing. 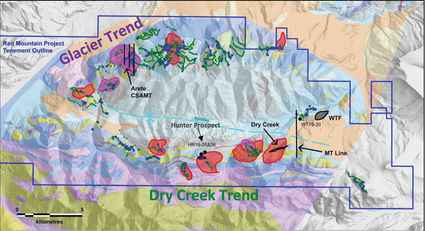 This map depicts the two prospective trends being explored this year at Red Mountain.

HR18-01, the Hunter discovery hole, cut 1.4 meters of massive sulfide averaging 17.4 percent zinc, 3.9 percent lead, 90 g/t silver and 1.6 percent copper. This equates to 25.8 percent zinc-equivalent when you consider the value of all the metals encountered.