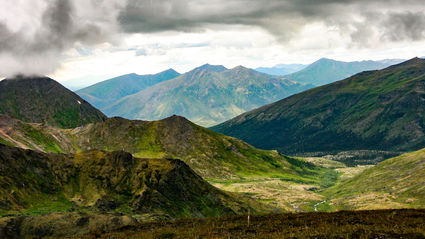 Trilogy Metals Inc. July 3 provided an update on the US$18.2 million of activities being carried out this year across its roughly 353,400-acre Upper Kobuk Mineral Projects in the Ambler Mining District of Northwest Alaska.

The largest portion of this program, in terms of dollars spent during 2019, is an 8,000-meter drill program aimed at upgrading and expanding the copper-cobalt resource at Bornite.

With none of the cobalt yet upgraded to the indicated category, the Bornite open-pit hosts 124.6 million metric tons of inferred resource averaging 0.017 percent (45 million lb) cobalt.

South32 Ltd. is investing US$9.2 million this year into expanding and upgrading this resource, which will bring the total the Australia-based major has invested in Bornite up to US$30 million.

Major Drilling America, the company carrying out the drilling at Bornite, has already completed 2,000 meters since the drills began turning there in early June.

The results from the 12 holes, which should start rolling in during late summer, are expected to be included into a future updated resource estimate for Bornite.

While South32 funds drilling at Bornite, Trilogy is investing US$7 million on the engineering and environmental work needed to complete a feasibility study for Arctic, the most advanced of the Upper Kobuk Mineral Projects.

A 2018 prefeasibility study detailed plans for an open-pit mine at Arctic and a 10,000-metric-ton-per-day mill that is expected to produce more than 159 million pounds of copper, 199 million lb of zinc, 33 million lb of lead, 30,600 ounces of gold and 3.3 million oz of silver annually over a 12-year mine-life.

Two rigs from Tuuq Drilling LLC, a subsidiary of NANA Development Corp., is carrying out drilling to provide additional geotechnical and hydrological data needed for the feasibility study, expected to be completed in the first half of 2020.

Work is also being done to prepare the Arctic project for permitting, which is expected to begin after the completion of the feasibility study.

Once the Tuuq drills are finished with this work, they will begin mineral exploration drilling at targets across the Ambler VMS Belt, which extends some 60 miles across the UKMP property.

District-wide VTEM (versatile time domain electromagnetic) and ZTEM (z-axis tipper electromagnetic) geophysical airborne geophysical surveys were completed this spring along this entire belt of rocks that already hosts dozens of known deposits and prospects. These surveys were also flown over the area around the Bornite deposit and Cosmos Hills, an area prospective for carbonate hosted copper deposits similar to Bornite.

Early results from the survey have already turned up numerous high-quality VTEM and ZTEM anomalies to follow up on. The results from the geophysics is being incorporated in Trilogy's already extensive dataset encompassing geology, geochemistry, geophysics and over 150,000 meters of historical drilling accumulated over a 40-year period of exploration, all of which has been geo-referenced into an integrated GIS database.

This integrated dataset will be analyzed to determine and prioritize targets for drill testing later in the summer after the Arctic environmental and geotechnical drill program has been completed.

The development of economically viable mines at Arctic, Bornite and other deposits across UKMP is dependent on surface access to deliver the rich metals concentrates produced to global markets. 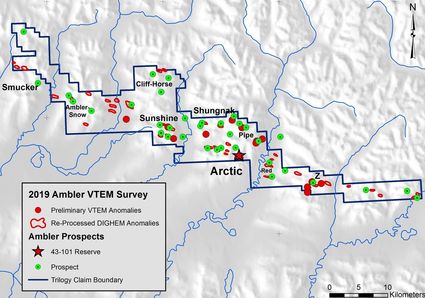 A VTEM geophysical survey competed early during the 2019 season provides Trilogy Metals and South32 dozens of targets to investigate across the 60-mile-long Ambler VMS Belt.

Trilogy participated in several meetings and has provided information and comment on the proposed and alternative routes being considered for the draft Environmental Impact Statement for the Ambler Road, the colloquial name for AMDIAP.

The draft EIS is slated for public release this summer, which will mark the start of an expected 45-day public comment period.

The Final EIS for the Ambler Road is currently slated for completion by early winter.

Thanks to an early exercise of outstanding warrants, Trilogy has an additional US$9.9 million to carry out these programs.

As a result of the warrants exercised, 6,521,740 Trilogy Metals shares were issued to three of the company's largest shareholders.