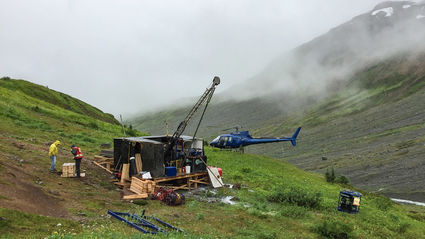 Aben Resources' 2018 drilling at Forrest Kerr encountered strong gold mineralization at Boundary North. The initial focus of this year's program is to test the expansion of bonanza gold grades encountered in one of these holes.

Aben Resources Ltd. July 9 announced that it has completed the 2019 drill program at its Justin gold project in southeastern Yukon and drills are now turning on its Forrest Kerr gold project in British Columbia's Golden Triangle.

Aben is starting off with a 5,000-meter drill program this year at Forrest Kerr. A second 5,000-meter phase that follows up on interesting targets turned up in the initial phase is expected to be added.

"The company looks forward to continued success as we start our fourth season of exploration and drilling at the Forrest Kerr gold project," said Aben Resources President and CEO Jim Pettit.

The initial drilling will be focused within and peripheral to the North Boundary zone, where drilling over the previous two seasons have encountered high-grade gold.

This is very similar to the 326 g/t gold Noranda encountered in RG91-16, a historical hole drilled roughly 200 meters to the south.

This year's drilling at Forrest Kerr will initially test the area between these bonanza grade gold intercepts at North Boundary.

Aben said the 2018 drilling at Forrest Kerr was hampered by limited permitted pad locations as a result of extensive forest fire activity in the area.

Over the winter season, an additional 45 drill pad locations have been approved, providing the company flexibility for testing new geophysical and geochemical targets and for investigating evolving geological theories.

While the mineralization in all three South Boundary holes was low grade, Aben is encouraged by the broad zones of pervasive alteration, quartz-sulfide veins and mineralized breccia zones indicative of a strong and widespread mineralizing event.

An airborne magnetic survey was completed in May over a 2,000- by 4,000-meter area that covers the entire Boundary zone.

Aben's previous drilling at Boundary has targeted near-surface, high-grade precious metal mineralization. The new geophysical data, coupled with observations from past drilling, support the theory that mineralization encountered may be related to deeper-seated structurally-related systems.

Aben intends to carry out deeper drilling during the 2019 season to test for the large porphyry-style copper-gold deposit types that are common in northwestern B.C.

The area of interest at Forrest zone is defined by highly anomalous gold-in-soil and gold-in-rock values coincident with a strong geophysical conductive anomaly originally reported in 2013.

A wrap to Justin drilling

The ramping up of exploration at Forrest Kerr comes on the heels of a 1,556-meter drill program at Justin, a gold exploration property adjacent to Golden Predator Mining Corp.'s 3 Aces project in the Yukon.

Discovery drilling carried out at POW in 2011 and 2012 cut wide zones of lower grade intrusion-related gold mineralization. Highlights from this drilling include 60 meters of 1.19 g/t gold and 46.4 meters of 1.49 g/t gold.

The four holes drilled this year at POW sought to evaluate the potential for bulk-tonnage gold mineralization and to test for the continuity of higher-grade skarn mineralization along strike.

Aben reports that all these holes encountered sulfide mineralization and assays are pending. 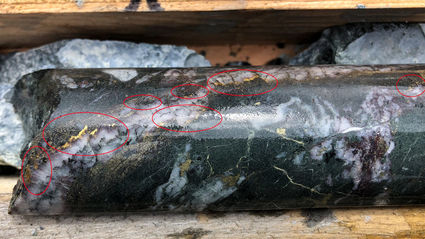 The majority of this year's RAB drilling, however, targeted Lost Ace, a high-grade gold-bearing vein system discovered by Aben in 2017.

Aben said several of the holes successfully encountered the contact of rock units where visible gold was discovered in surface sampling during 2018.

Assays from all the drilling at Justin are pending and the company expects to release results in the coming weeks.