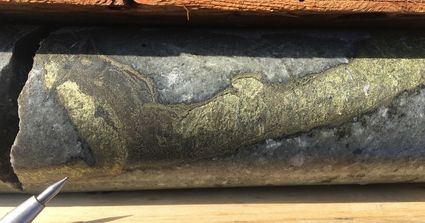 A two-meter section of chalcopyrite-filled core encountered at 420 meters in THN19-150 that averaged approximately 4 percent copper.

This hole, drilled to a depth of 829 meters, extended the polymetallic mineralization at Oban 281 meters deeper than previous drilling.

Importantly, this hole encountered an increase in porphyry-type veined clasts starting at 185 meters and sulfide-mineralized porphyry clasts from 429 to 677 meters, indicating porphyry affinity. 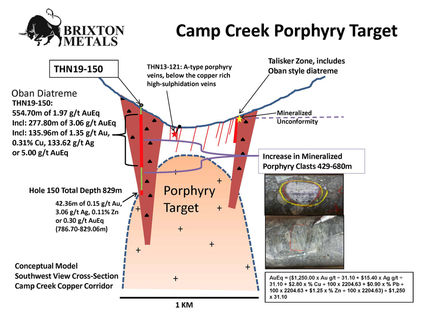 Structural mapping and soil-rock geochemistry at the Chivas zone, as well as re-logging of select core from the Glenfiddich zone provide further evidence of porphyry mineralization and have refined targets for future drilling.

Hole THN13-121, which was drilled in the Glenfiddich zone about 1,000 meters west of THN19-15, identified an increase in A-type porphyry veins at the bottom eight meters of the hole.

"The geometry is still unknown, but we may be dealing with a tilted system which will require more drilling to determine this. The re-logging of hole 121, which is located about one kilometer west from hole 150, identified an increase in porphyry A-type veins towards the bottom of the shallow hole suggesting we may be closer to the porphyry center. All of this work strongly suggests the presence of a large porphyry system at the Thorn project," Posescu added.