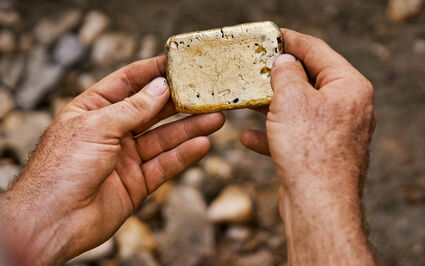 Apple is sourcing gold for its iPhones, iPads, Macs and other electronics from placer mining operations reclaiming fish habitat in Alaska, Yukon and British Columbia.

There are hundreds of small and large placer mining operations actively producing gold in these late 19th century gold rush destinations. This provides placer miners an opportunity to apply modern gold mining techniques and equipment to recover gold left behind by their predecessors and restore fish habitat at the same time.

Mining, logging, urbanization, wildfires and landslides have degraded salmon spawning streams and habitat for other fish in the Pacific Northwest. This concerns the First Nation groups.

"Salmon to our people is absolutely the most important aspect of the whole environment," said Allen Edzerza, an elder of the Tahltan First Nation in northern B.C. and advisor to the B.C. First Nations Energy and Mining Council. "But ... in the pursuit of the metals, you see big scars on the landscape."

RESOLVE, a nonprofit organization tackling some of the planet's most critical challenges through innovative and unexpected partnerships, wants to fix that.

Their proposal: combine re-mining with restoration to improve the streams and open them back up for salmon, grayling and other fish species to return.

Since RESOLVE first introduced the Salmon Gold partnership in 2017, the organization is connecting local placer miners, environmentalists and government agencies in order to rehabilitate streams historically mined in Alaska, B.C. and the Yukon.

"Salmon Gold is like a peace treaty between mining and salmon habitat," said RESOLVE CEO Stephen D'Esposit. "It's a place where the three sectors can work together – the restoration community, First Nations and the mining industry."

Apple, which uses small amounts of gold in electronic components throughout its line of high-tech products, and global luxury jeweler Tiffany & Co. will source gold from placer miners who have committed to restore and improve the land they're operating on when they're done.

"As we continue to increase our use of recycled materials, we're seeking out innovative ways to source gold responsibly," said Apple Head of Supplier Responsibility Paula Pyers. "Partnering with Tiffany, a pioneer in sustainable sourcing, as well as RESOLVE ensures Salmon Gold can be an example of how the industry can evolve."

After securing Salmon Gold's first restoration agreement near the historic mining town of Chicken, Alaska, D'Esposito enlisted Edzerza to be Salmon Gold's scout on the ground in the Yukon and British Columbia, building key relationships with placer miners and the local government, as well as First Nations leaders in the area.

"If we can design restoration pilot projects so that you can see if you can actually create the right environment for fish to live in it, to spawn in it – if we can do it on a small scale, the question is can you take it with a long-term vision five, 10 years down the road and see a whole watershed properly restored so that you can re-establish the salmon stocks," said Edzerza.

This is the ultimate goal of Salmon Gold, which will continue to support stream restoration pilots over the next few years and then scale-up to target restoration at a watershed level.

In Chicken, local miners Dean Race and his son Chris were already in the process of restoring Jack Wade Creek in the Fortymile Mining District when RESOLVE reached out.

"All of Jack Wade is full of tailing piles, and Mother Earth will someday eventually recover that, but it's going to take a couple hundred years," Chris said. "All we're doing is speeding up the process ... when I'm done with it, it's going to look like a park."

All throughout this region, the Salmon Gold miners are developing a sustainable model for future miners to follow.

Peter Wright, Edzerza's nephew, runs a mining site on Sulphur Creek near Dawson City and has been mining in the area since he was 18.

"When I first started in the industry, there wasn't a lot of environmental awareness," Wright admits. "We're all becoming very aware of what we're doing here and making big changes, like no mercury, no chemicals, trying to reclaim the land as much as possible and help nature reintroduce itself."

Wright's site is expansive. Piles of topsoil tower above the permafrost as patches of green spring up along the length of his operation.

"We are at the headwaters of salmon rivers and the Yukon River of course being one of them," Wright said. "Instead of leaving [the pit] wide open, letting all the erosion happen, and letting the streams be plugged with silt which affects the salmon spawning beds ... everything that we do with our reclamation is to help the earth recover. Not only from our mining activities, but from a hundred years before."

To date, RESOLVE has secured restoration plans with three miners in Alaska and the Yukon, with several more under consideration for next summer.

As the 2019 mining season comes to a close, the organization expects to source more than 1,000 ounces of the partnership's trademarked Salmon Gold this year, increased from last summer's 25 oz.

This fall, all Salmon Gold entering Apple's supply chain will be traced from the mine to the refiner using blockchain technology.

Salmon Gold's partners will continue fine-tuning the project so that one day it may provide a blueprint for others to change the way they mine. In the meantime, Edzerza will continue scouting in the Yukon and B.C. as RESOLVE looks for new partners.

"We have a sacred responsibility to stewardship of the environment that we call our ancestral land, so that future generations can experience it the way our ancestors did," said the Tahltan Nation elder. 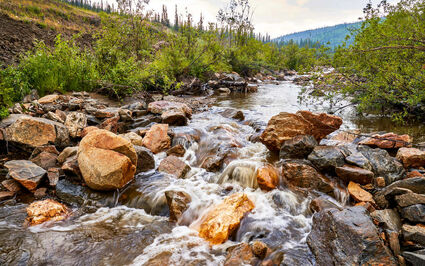 CORRECTION: This article was updated to correct an error in identification of the Race family.