Koniag continues a tradition of mining 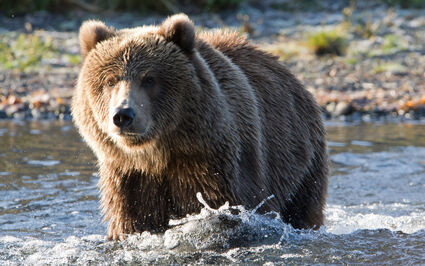 The iconic Kodiak brown bear. Much of the Kodiak and Afognak islands are set aside as a federal wildlife refuge for these genetically distinct and legendarily large bears.

The Alutiiq people that arrived on Kodiak, Afognak and surrounding islands more than 7,500 years ago were skilled mariners who were deeply connected to the ocean for food and supplies.

These journeys were often made in huge open skin boats loaded with the rich resources Kodiak had to offer – hard black slate, red salmon, bear hides, and spruce root – to be traded for mainland goods such as antler, ivory, horn, animal pelts and exotic stone.

Peaceful trade and diplomacy, however, were not always the intent of these quests. Chiefs initiated raiding parties, traveling hundreds of miles to avenge insult and invade rival communities for plunder and slaves.

During the dark winter months, the bounty of summer harvest, trade and conquest were invested in the community through public displays of chiefdom prowess.

By honoring the events of the year, displaying their wealth through lavish feasts and gift giving, honoring ancestors and thanking the spirit world, the Alutiiq elite preserved their status and provided for the economic, social, and spiritual needs of their communities.

Today, the Koniag regional and Alaska Native Claims Settlement Act (ANCSA) village corporations in the Kodiak region serve in much the same role as the traditional chiefdoms – working for the economic, social, and even spiritual health of shareholders.

"Koniag achieves financial growth, honors our culture, protects our lands, advocates for our communities, and makes a meaningful impact on our Koniag family," according to the regional corporation.

• Planning for the long term – Koniag intends to be a "forever" corporation through land stewardship, stakeholder education, shareholder benefits and prudent investment of financial assets;

• Honoring its heritage and culture – knowing that individuals with a strong cultural identity have a sense of belonging and positive self-esteem, Koniag is committed to sustaining its Alutiiq culture and language;

• Embracing diversity – from shareholders living in Kodiak villages to those in large cities around the world, Koniag embraces its diversity and recognize that as a source of strength;

• Being open and honest – As a corporation, Koniag's foundation is built on long-term business relationships based on openness, honesty and mutual trust;

• Having pride in its work – cherishing a reputation built on an ethical foundation, Koniag enjoys hard work and takes work seriously, but strives to be humble enough not to take itself too seriously; and

• Sharing the catch – Koniag values the individual contribution of employees and stakeholders, and strives to enrich the lives of shareholders and their families though robust benefits and services.

"The Alutiiq value of caring for our community is embedded in everything that we do - every service, decision, and investment is a reflection of our commitment to living our culture," the corporation explains. "Koniag will continue to celebrate our traditions and values, protect our lands, advocate for our communities, and enrich the lives of our shareholders, descendants, and employees at every turn."

The corporation's investments range from real estate holdings, resource development and business operations that include oversight of over a dozen subsidiaries.

"Our priority right now is to grow our business through supporting our existing operating companies, including those in resource development," Koniag President Shauna Hegna told Mining News.

While the Kodiak Archipelago is not renowned for its mineral potential, this does not mean the Koniag region is bereft of mineral prospects. Chromite, a mineral that has been deemed critical to the United States, has been historically identified in five mafic or ultra-mafic complexes on Kodiak and Afognak islands. Two other critical mineral commodities – tin and platinum group metals – and gold have also been found on the islands.

While much of the Kodiak Archipelago is preserved for the iconic bears, there are areas available for development and Koniag has one mining operation of its own – the Kodiak Granite Quarry, which has provided quality granite to coastal Alaska construction projects.

"Material from the quarry has been used for the Chignik Ferry Dock, the Homer Spit, the Seward Breakwater project, the Port Lions Breakwater and Ferry Dock projects, and more," Hegna told Mining News.

With a large deposit of granitic rock suitable for marine and road construction, Kodiak Granite Quarry has the capacity to produce 250,000 tons of armor stone, riprap, crushed aggregate and other granite products per year for a century.

Koniag also owns lands that may have mineral potential, including a block on the northwest side of Kodiak Island that is crossed by the Border Range fault. The ANCSA corporation is open to responsible exploration on its lands. 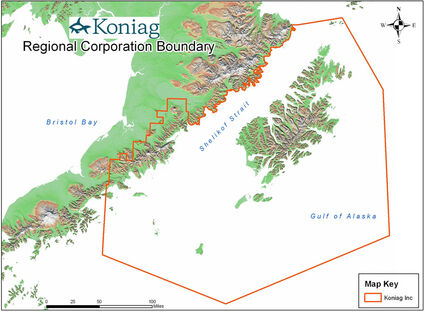 EDITOR'S NOTE: "Koniag continues a tradition of mining" is the eighth article in a 13-part series that investigates what the Alaska Native Claims Settlement Act means for Alaska's mining sector and its future. The remaining articles will continue to dig deeper into each of the land-holding Regional corporations; the mining lands that they own; and the services they offer to the mining sector. As a life-long Alaskan that has written about mining here for more than a decade, it is my hope that this series will provide a better understanding of ANCSA and serve as a guide to mining companies seeking to do business in The Last Frontier. For further information on ANCSA see An Alaska Native claims primer for miners published in the February edition of North of 60 Mining News.