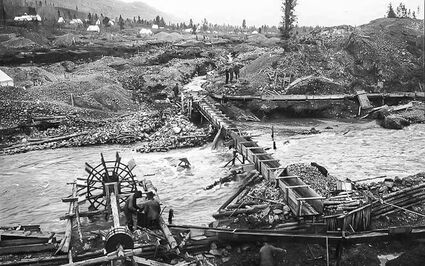 Miners recover gold from Pine Creek in British Columbia' Atlin District during the summer of 1899. One gold nugget found in this creek weighed 48 ounces, or about three pounds.

By 1898, the Klondike Gold Rush was beginning to wane and many of the roughly 100,000 people that trekked to the Yukon were seeking new regions to make their golden fortunes - moving in every direction at the merest mention of a new discovery.

Many of these Klondike Gold Rushers headed west to the golden beaches of Nome whilst others would return south and discover the richest gold mining region of British Columbia, the Atlin District.

Considered one of the most important gold mining centers in Canadian history, gold had actually been discovered in the Atlin region as early as 1857. Yet, due to inaccessibility and limited technology, there was no gold rush to the region at that time.

The remote location and difficult terrain made many sections of British Columbia rather hostile towards the mining of gold.

There would probably have been no gold rushes at all even, had the advent of the telegraph, mass circulation newspapers and steamboats not been invented.

Yet the innovations of man prevailed, and the history and charm of pioneering continues in Atlin today.

Atlin gets its name from Áa Tlein, the Tlingit word for "big body of water". At 305 square miles, Lake Atlin is the largest natural lake in B.C. and the surrounding area is home to the Taku River Tlingit First Nation.

Prior to 1898, nearly nothing was known of Atlin beyond its being a country of lakes and mountains. Yet in the spring of that same year two prospectors – Fritz Miller, a German, and Kenneth MacLaren, a Canadian – left the Klondike trail at Bennett and crossing the ice of Taku Arm and Lake Atlin found themselves on Pine Creek.

To secure supplies for an extended stay at their gold discovery, the two prospectors made their way to Juneau, Alaska. On their return they were followed, and by mid-August news of the gold strike reached the government at Victoria.

Nearly 3,000 people had rushed to the camp and all available ground was staked. Only four hundred people wintered in Atlin, but in the following spring there were thousands of new arrivals.

Early on, most of the shallow, easy to find gold deposits were thoroughly cleaned out which left the rest of the gold to be discovered in the deep ground. The combination of the difficult terrain and harsh conditions forced many miners to quit while others joined together in their efforts to mine the gold.

Historic mine sites of Atlin

Practically all the placer gold of Atlin was derived from the Pine Creek valley, which is a wide valley extending some twenty-five miles eastward of Atlin Lake.

The valley is drained by Surprise Lake and Pine Creek with their tributaries – Ruby, Boulder and Birch on the north; Wright, Otter, Gold Run, and Spruce on the south.

Pine Creek, which flows from Lake Surprise for 12 miles before draining into Lake Atlin, was perhaps the richest gold producing creek in Atlin during the initial gold rush. One nugget pulled from Pine Creek weighed 48 oz, which is about US$72,000 of gold at today's prices.

Spruce Creek, located at the southern end of an ancient gold-rich channel, feeds into Pine Creek and likely contributed to the gold found there.

Boulder Creek, yet another rich gold creek in the region that drains into Lake Surprise, was the third largest producer of placer gold among all creeks in Atlin.

Today, parts of Boulder Creek are open for public prospecting with many visitors recording gold nuggets and flakes discovered.

It is interesting to note that the 1909 Minister of Mining records show that the amount of gold that came out of Atlin during the years of 1898 to 1908 was worth roughly $4.5 million, at today's gold price that would be $333 million of aurum.

This total was furnished by the government as a conservative one and the writer did not hesitate to place the total of the Atlin gold output over the decade since discovery at $6 million, or nearly 300,000 oz. As the average number of men actually engaged in mining each year had been about six hundred, and the per capita yield of gold being roughly one thousand dollars.

"During that period, from streams draining an area of less than fifteen square miles, about six millions of dollars have been obtained. It must be remembered that an exact estimate of the gold extracted can only be approximated. The Provincial Government levies a two percent mineral tax upon all output exceeding two thousand dollars; and the annual output is computed largely, though not solely, on the amount for which royalty has been paid. As may be supposed, each year a great deal of gold passed out of Atlin without being declared for royalty, hence without being in any way recorded," The Journal of the Canadian Mining Institute, 1909.

Claim jumping and the "Alien Bill"

It seems that the issues that arose at nearly every gold rush site across the North followed to Atlin as well.

A dispute over land and territory placement for the Atlin Gold Region. The first prospectors were uncertain whether Atlin was in British Columbia or the Northwest Territories.

A placer claim found in NWT was about 250 feet while the other was nearly 100 ft in B.C.

The Canadian Mounted Police had claimed it for NWT. However, when it was established that Atlin was in B.C., the NWT claims were jumped, igniting years of litigation.

In 1899, the B.C. government passed the "Alien Exclusion Bill" in the hopes of retaining gold and trade for Canadian residents. The U.S. claim holders made a plea with the U.S government and the next year the "Alien Bill" was disallowed, but the damage had already been done. Confusion over mining claims and lack of proper recording, hundreds of people left the Atlin region.

In, Before the Klondike there was Forty Mile, it was mentioned how involvement of the local government soured the freedoms of the miners in the Yukon.

This is not a criticism of government attempts at controlling the valuable resources on Canadian land. It is evident, however, that such involvement historically had negative impact.

The point being, nothing could resist the allure and gold moved nations as much as individual men.

Switzerland of the North

By 1930, the mining activity in the Atlin region slowed considerably. However, due to its rather exotic setting, Atlin was earning money as a tourist destination.

The popularity of Atlin as an exotic tourist destination came to light in the 1920s.

As there was no road to the settlement, these early tourists were required to travel up the inside passage through the B.C. coast and the Alaskan panhandle, and a series of passes and lakes through yet more of Alaska, B.C. and even the Yukon.

Finally, one last ferry ride and tourists would arrive across the lake to stay at the large three story Atlin Inn.

It was during this time it was nicknamed the "Switzerland of the North" because it is surrounded by mountains and beautiful vistas in much the same way as Switzerland.

Not long to last however, the Great Depression caused tourism to decrease and the White Pass and Yukon Route closed their transportation routes and hotel. Atlin continued to be largely isolated from transportation and commerce until a road was built from the east in 1950-51.

While gold mining waned in the 1930s, placer miners continue to pull gold from the streams and the hardrock source of the alluvial aurum that fueled the Atlin gold rush is sought by Brixton Metals Corp.

In addition to continued gold-mining activity, Atlin is a tourist destination for fishing, hiking and heli-skiing. As of 2004, this community on the eastern shores of Lake Atlin had 450 permanent residents.

It is said that there is still plenty of gold nuggets coming out of the gravel around Atlin. Several huge nuggets from several ounces up to three pounds have been reported, so clearly it holds great potential for gold miners and tourists visiting the Switzerland of the North.

Overall, the frantic mining, the hostile and remote location, the disputes and controversy, may lead one to possibly think that the Atlin Gold Region may yet have quite a bit more to offer.

As often was the case with gold rushes, mining was rather slipshod and inefficient as well as fervent and desperate. So, who knows? Maybe a summer trip to the beautiful Canadian "Alps" could lead to a fantastic discovery. 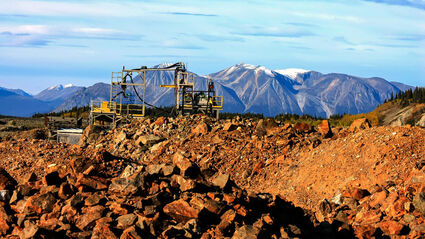 Old workings at the Yellow Jacket Mine, an operation that mined high-grade lode gold above the prolific placer gold streams in the Atlin District. Today, Brixton Metals is exploring for additional hardrock gold across roughly 386 square miles of mining claims that extend east from the community of Atlin.