Ketchikan's economy was largely centered on logging prior to Tongass timber harvest restrictions beginning in the 1990s.

Alaska Gov. Michael Dunleavy and Alaska's entire delegation in Washington D.C. welcomed the Trump administration's plan to exempt the Tongass National Forest from the 2001 Roadless Rule, which would lift impediments to forestry, mining and other activities across Southeast Alaska.

"Today's announcement on the roadless rule is further proof that Alaska's economic outlook is looking brighter every day," Dunleavy said on the U.S. Forest Service Oct. 15 announcement that it is considering the options for lifting restrictions in the Tongass.

Established by the Clinton administration in 2001, the roadless rule prohibits road building and logging on 58.5 million acres of national forest lands, including more than 9.2 million acres of the Tongass.

In 2003, the Bush administration exempted the Southeast Alaska forest from the conservation measure, only to be re-instated by U.S. District Judge John Sedwick in 2011.

The U.S. Department of Agriculture, which is over the U.S. Forest Service, is now developing an Alaska-specific roadless rule that would allow for responsible resource development in the Tongass.

Alaska's senators and congressmen on Capitol Hill hailed this a major win for Southeast Alaska and the state as a whole.

Conservationists, on the other hand, are rallying against the lifting of this rule that prevents development across the Tongass, which extends for more than 500 miles and covers roughly 80 percent of the Southeast Alaska Panhandle.

"The removal of Roadless Rule protections in the Tongass threatens tourism, salmon populations, food security, and some of the wildest remaining places in the country," said SalmonState Executive Director Tim Bristol.

Under Dunleavy, the state of Alaska petitioned President Donald Trump and USDA Secretary Sonny Perdue to completely exempt the Tongass National Forest from the roadless rule in favor of state-specific management of the forest.

As a result of this petition, which was supported by Rep. Don Young, Sen. Lisa Murkowski and Sen. Sullivan, the USDA has launched an Environmental Impact Statement that puts forward a range of alternatives for roadless management in the Tongass.

• Alternative 1: take no action and leave all of Alaska under the 2001 Roadless Rule, including the Tongass National Forest.

• Alternative 3: provide regulatory protections for all key watersheds inside and outside roadless areas; create a community priority roadless designation that allows for recreational development and timber sales under 1 million board feet; and convert 76,000 old-growth acres and 14,000 young-growth acres previously identified as unsuitable timber lands to suitable timber lands.

• Alternative 6: exempt the entire Tongass National Forest from the 2001 Roadless Rule, which is fully responsive to Alaska's petition.

"I'm very pleased the administration has listened to Alaskans and is proposing a full exemption from the roadless rule as its preferred alternative," said Murkowski.

USDA said conservation of roadless values within this large forest that spans almost the entire length of the Southeast Alaska panhandle would be achieved through other means, including the Tongass Land Management Plan.

"I am optimistic that this decision will allow for proper management of the Tongass to provide opportunities for tourism, fishing, and wildlife viewing as well as mining, energy development, and timber," said Congressman Young.

In addition to potential timber harvest, the lifting of the roadless rule is good news for companies hoping to develop mineral projects in Southeast Alaska.

One of the most advanced of these potential mine projects is Bokan Mountain, a project on Prince of Wales Island that hosts rare earth element and other metals considered critical to the United States.

Earlier this week, Ucore Rare Metals Inc. reported that the Dotson Ridge deposit at Bokan hosts 38,500 metric tons of six critical minerals – niobium, zirconium, beryllium, hafnium, titanium and vanadium – that could potentially be recovered in conjunction with the 16 rare earths already identified there.

"This potential action, combined with Governor Dunleavy's request for high priority infrastructure project designation for Bokan, should allow Ucore to gain approvals for the project in a substantially shorter time frame, adding to the project's appeal as a potential near-term source of critical rare earths to the American defense, energy, and technology sectors," said Ucore Rare Metals COO Mike Schrider.

Dunleavy's request was proposed in an August nomination of Bokan Mountain as a high priority infrastructure project under Trump Executive Order 13766, which would expedite the permitting process for this potential critical metals mine.

In addition to providing jobs and other economic activity in the state, the Alaska governor sees Bokan Mountain as a potential domestic source of rare earths and other critical metals for which the United States is heavily dependent on imports for its supply.

"The state of Alaska understands the critical nature of a secure supply chain for rare earth minerals in the United States," Dunleavy penned in his Aug. 9 nomination letter. "We are seeking your support to have this Alaskan rare earth deposit deemed a high priority infrastructure project and recognize this designation will allow for a more efficient permitting process to ensure the resource is available for development in a reasonable time-frame."

As for the EIS for exempting the Tongass from the roadless rule, the USDA will open a 60-day public comment period on the six alternatives put forward on Oct. 18. 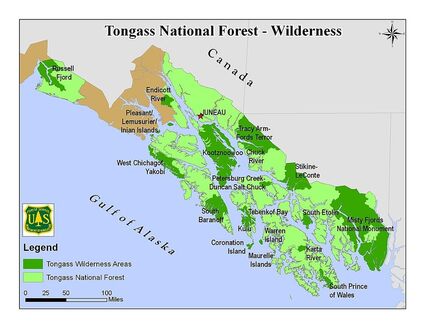 The Tongass Forest stretches for roughly 500 miles and covers roughly 80 percent of the Southeast Alaska Panhandle.

During this time, which ends on Dec. 17, the Forest Service will be hosting a series of public meeting and subsistence hearings.

Comments can be submitted:

• via email at [email protected];

USDA said written comments will help inform its final decision about a roadless rule specific to the Tongass. The secretary of agriculture is expected to make a final decision on partially or completely exempting the Tongass from the 2011 Roadless Rule by June 2020.