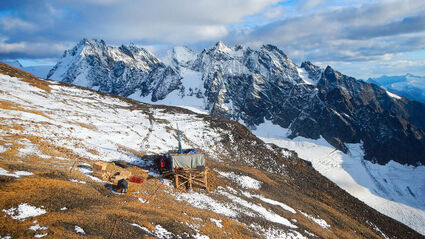 Previous drilling determined that high-grade epithermal precious metal occurrences associated with the lithocap at Quartz Rise had largely been eroded. This drilling, however, provided evidence that the underlying porphyry system may be closer to the surface than previously envisioned.

"We believe we have identified a new, high value target that can be explored cost-effectively," said Seabridge Gold Chairman and CEO Rudi Fronk.

The summer exploration program has identified a large intrusive system at relatively shallow depth that is likely responsible for the Quartz Rise Lithocap and elevated gold and copper concentrations within a geological environment remarkably similar to Seabridge's nearby KSM project.

In order to define the geophysical limits and assess the geochemical and geological expression of a possible porphyry intrusive system that would account for the mineralization found at Quartz Rise, this summer's program included three dimensional induced polarization (IP) surveys and high resolution magnetic geophysical surveys, as well as the collection of 184 surface geochemical samples.

Previous drilling at Quartz Rise focused on high-grade epithermal precious metal occurrences associated with the lithocap, an alteration zone that is often found above porphyry-type gold-copper deposits. Results determined that the lithocap at Quartz Rise had been substantially eroded. However, a hydrothermal breccia (diatreme) discovered in 2018 was found to contain clasts (rock fragments) of porphyry-style veins, which confirmed an underlying porphyry source for the lithocap.

Diatremes are explosive volcanic vents produced in a solid rock structure by the energy from expanding fluids and gases evolving off magmas. Diatremes are commonly found above and adjacent to porphyry mineral systems which are their source of heat and fluids.

This breccia feature at Quartz Rise is enclosed by an IP chargeability anomaly coincident with a magnetic high, indicative of a porphyry system.

Detailed work on the surface expression of the diatreme found that it plunges to the south toward the highest intensity chargeability anomaly and geochemical signature. 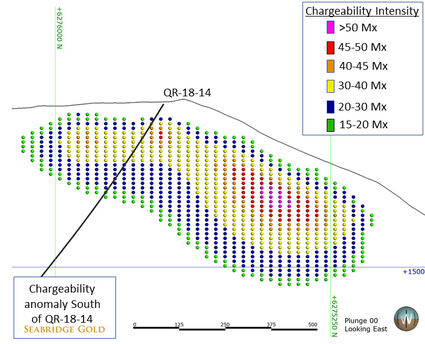 The intensity of an induced polarization (IP) geophysical anomaly at Quartz Rise increases to the south of QR-18-14, a 2018 hole that encountered rock fragments with porphyry-style veins.

The geophysical footprint was therefore expanded to the south and southwest into an area where glacial erosion had exposed the system vertically to a depth of over 800 meters. Surface mapping and sampling of this vertical exposure found extensive gold and copper anomalies within favorable thermally altered wall rock. Several intrusions have been identified in association with this diatreme and these features have been dated to about 186 million years, the same age as the enormous porphyry gold-copper deposits Seabridge has outlined at KSM.

"We acquired Iskut because we saw clear evidence of a large porphyry system which looked to be similar in age and geology to our KSM project 30 kilometers (19 miles) to the east," Fronk said. "We have now refined the location of this porphyry target, confirmed the presence of gold and copper, established its age and determined that it is within reach of surface drilling. Our team is now developing an aggressive drill testing program that we plan to commence in the coming year."