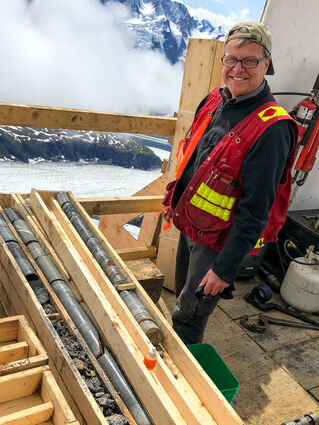 Constantine Metals CEO Garfield MacVeigh on a rig during the 2019 drill program at the Palmer zinc-copper-gold-silver-barite project in Southeast Alaska.

In order to focus on its flagship Palmer project in Southeast Alaska and to realize greater value from its portfolio of gold properties, Constantine Metal Resources Ltd. spun its gold assets into a new exploration junior, HighGold Mining Inc.

"Constantine will continue to create shareholder value by advancing the Palmer project and will allow shareholders to realize the value locked in the gold assets through their spinout into a separate entity," said Constantine Metal Resources President and CEO Garfield MacVeigh.

With HighGold advancing the gold properties, Constantine focused its 2019 exploration on expanding and upgrading the zinc-copper-gold-silver-barite resources at the Palmer volcanogenic massive sulfide project near Haines, Alaska.

A preliminary economic assessment completed in June outlines plans for developing an economically robust and environmentally conscientious mine at Palmer.

The PEA considers an underground mine providing ore for a 3,500-metric-ton-per-day mill that would produce 1.07 billion pounds of zinc, 196 million lb of copper, 18 million ounces of silver, 91,000 oz of gold and 2.89 million metric tons of barite over an initial 11-year mine life.

Underground mining would begin at the Palmer (Southwall-RW) deposit, which currently hosts all the indicated resource and about 56 percent of the inferred resources. During the third year of operation, AG Zone, a newly discovered deposit about 3,000 meters to the southwest, would be mined in conjunction with Palmer.

The capital costs to build this mine are calculated to be US$278 million, which would be split between the Constantine Mining LLC Joint Venture partners, Constantine (51 percent) and Dowa Metals & Mining Co. Ltd. (49 percent).

A wide margin between operating costs and the value of the metals being mined creates compelling economics and a quick payback of the capital needed to develop this mine.

The PEA forecasts the Palmer Mine to have a post-tax net present value (7 percent discount rate) of US$266 million; a 21 percent post-tax internal rate of return; and a payback period of 3.3 years.

Looking to expand the life of the mine beyond the 11 years considered in the PEA, the 2019 program included roughly 8,000 meters of drilling aimed at expanding the Palmer and AG deposits as well as testing other prospects within 2,000 meters of the mines detailed in the economic assessment.

"We are excited to build upon the very strong results of the recently completed PEA, with a focus on continuing our excellent record of discovery and resource growth at Palmer," said MacVeigh.

VMS deposits such as those found at Palmer are formed as hydrothermal fluids associated with volcanic activity leave metal and sulfide deposits on the ocean floor. When emplaced, this area is typically fairly linear and along a horizon that matches the ocean floor at the time.

Due to structural folding from subsequent tectonic activity, more than six miles (10 kilometers) of the key VMS horizon at Palmer has been folded into a relatively compact area, which could allow for multiple deposits to be accessed by a single, centrally located portal.

Outcrops of the VMS horizon, coupled with geophysics and geological observations, is assisting in identifying new prospects close to the current resources. The most promising are HG, CAP and Waterfall, situated along steep folds between the Palmer and AG deposits.

Drills will also target expansion of the established deposits.

Now that the PEA is complete and encourages further advancement at Palmer, one of the next steps is to develop an exploration ramp that will provide a platform for drilling the deposits from underground with the spacing needed to advance pre-feasibility and feasibility level studies.

Toward this next step, the Palmer Joint Venture has received the necessary approvals to proceed with an underground exploration plan that includes developing a roughly 2,000-meter exploration ramp and 30,000 meters of underground drilling.

The Palmer JV plans to begin the approved underground exploration work in June of 2020.

EDITOR'S NOTE: This article was published in Mining Explorers 2019, a magazine published Nov. 1, 2019. The plans for underground exploration at Palmer has been postponed and is no longer scheduled to start June, 2020. North of 60 Mining News apologizes for any confusion from an update, which caused this article to appear to be recently published.