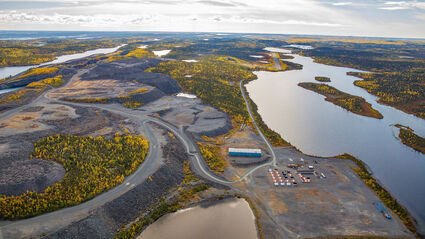 An aerial view of the Nighthawk Gold's camp at the past producing Colomac gold project on the company's district-scale Indin Lake property in Northwest Territories.

After nearly 10 years of exploring the Colomac Gold Project in Northwest Territories, Nighthawk Gold Corp. is making progress toward increasing the project's resource in 2020, while strengthening a long-held theory that the project sits in the middle of a potential gold camp that could rival the legendary Timmins Gold Camp of Ontario.

"We firmly believe that as Colomac grows, so will the credibility of the gold camp that it resides in, and we are strategically positioned to reap the benefits," Nighthawk President and CEO Michael Byron, Ph.D., said recently. "2019 will again see us expand on all exploration fronts, committed to delivering on our vision for developing Canada's next gold camp."

The Colomac Gold project is located within Nighthawk's 899-square-kilometer (200,203 acres) district-scale Indin Lake Gold Property, which has numerous gold deposits and showings, and is situated about 200 kilometers (120 miles) north of Yellowknife, NWT.

The latest drilling at Colomac spanned zones 1.5, 2.0, 2.5, and 3.0, with all of the holes intercepting mineralization.

10 years of exploration at Colomac

After encountering high-grade gold mineralization in every hole drilled in Zone 2.0 during the first five months of its 2019 exploration campaign and boosting its working capital more than $22 million, Nighthawk increased its drilling goal for the field season to 35,000-40,000 meters from 25,000 meters originally planned and extended its planned 2019 exploration of Colomac and other targets on the property until late September.

"Our three drills have been in operation since early March, and we are on track to meet and/or exceed our 2019 planned meterage. As well, with our field exploration program now in full swing, we are expecting this to be our most productive exploration campaign to date," Byron said in a statement on July 31.

By locating and tracing new areas of higher-grade mineralization along the Colomac Main sill, Nighthawk is validating its thesis that the deposit has the capacity to host separate corridors of elevated grade (typically significant widths averaging more than 2.0 grams per metric ton with internal higher-grade cores). Some of the corridors are broad domains of contiguous mineralization along strike and to depth that remain largely unexplored.

Recent drilling also followed up on initial successes in Nighthawk's 2018 program within the southern portion of Zone 2.0 by tracing a new broad zone of higher-grade mineralization from near surface to a depth of 350 meters where it remains open.

Since Colomac is a large mineralized system and given that Nighthawk's drilling success rate is greater than 97 percent, the opportunity to continue to grow resources with additional drilling is considered exceptional, the junior said.

"With these latest results, we have successfully traced a newly discovered continuous higher-grade corridor within the southern part of the zone, to a vertical depth of almost 350 meters, where it remains open in all dimensions. These results are a true testament to the sill's remarkable untapped endowment. Being largely unexplored to depth, we consider this area to be extremely valuable for resource growth opportunities, as well as a strong candidate for hosting additional higher-grade mineralization," Byron said.

At mid-season, Nighthawk had two drills in operation at Colomac with a third active at Treasure Island, which is located 10 kilometers (6.2 miles) to the north.

"This latest drilling followed-up on recent discoveries of higher-grade mineralization in Zones 2.0 and 3.0. Our goal was to extend these known occurrences down-plunge and to test other highly prospective opportunities. Outcomes have been exceptional, resulting in a new discovery in Zone 2.0 and the successful expansion of three previous discoveries," Byron said. 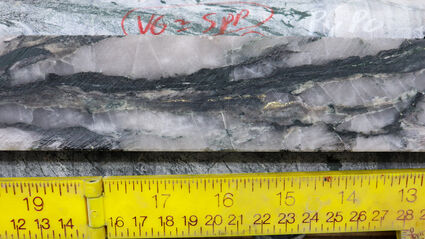 Stringers of visible gold cut in C19-08, a hole that cut 56 meters of 13.49 g/t gold at the Colomac project on Nighthawk Gold's Indin Lake property.

"With the discovery of distinct high-grade domains at Colomac, (Nighthawk) has effectively changed the dynamics of the deposit as it could lead to more favorable economics and allow exploitation deeper into the system. The exploration and delineation of additional high-grade zones remains an important focus going forward," the company said.

Nighthawk also identified several high-grade showings and deposits with widespread mineralization in a range of styles across the Indin Lake property. Continued exploration success at satellite targets nearby also supports the explorer's conviction that the Colomac deposit is not the only multimillion-ounce opportunity capable of hosting high-grade mineralization on the Indin Lake property.

Byron said the company plans to mobilize more drills this season to other high-priority regional prospects in the Indin Lake Greenstone Belt.