Goodpaster – Gold is where you find it 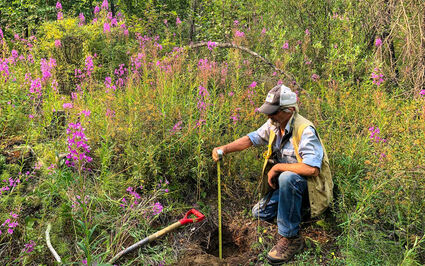 The Goodpaster Mining District in Interior Alaska adds credence to the sourdough mining adage "gold is where you find it."

Yet, Northern Star Resources Ltd.'s Pogo Mine in the Goodpaster has churned out more than 4 million oz of gold and the high-grade underground operation has another 6 million oz in 19.3 million metric tons of resources averaging 9.6 grams per metric ton gold.

Included in these resources are 6.1 million metric tons of reserves averaging 7.5 g/t (1.5 million oz) gold, enough ore to feed the Pogo mill for the next five years.

And the Australian miner continues to find gold all around its newly acquired Interior Alaska gold mine.

In addition to the Pogo property itself, Northern Star has cut a deal to buy Stone Boy, a group of four earlier staged gold properties in the Goodpaster Mining District, from subsidiaries of Sumitomo Metal Mining (95 percent) and Sumitomo Corp. (5 percent).

"This is a district-scale camp that we got our hands on," Northern Star Resources Executive Chairman Bill Beament said. "It is very rare to discover and get your hands on those assets anywhere around the world, especially in places you want to live in, work in and come holiday in."

"We are really excited about the Pogo district," he added.

This excitement is infectious – at least another five mineral exploration and royalty companies have nabbed a stake in this high-grade gold district.

While Northern Star's quick build-up of gold resources and reserves in zones already known at Pogo has been impressive, it is the Perth-based company's discoveries outside of the immediate mine area that is creating excitement for the potential of the wider Goodpaster district.

Central Veins, a discovery that is good for the future of the mine and demonstrates the hidden potential of the Goodpaster District as a whole, is one such discovery.

Only about 800 meters north of the underground development at Pogo, Central Veins is interpreted to be a stack of at least five vein structures similar to the Liese Veins where most of the Pogo gold has been mined.

According to a calculation published in August, drilling through mid-2019 had outlined roughly 500,000 oz of gold at Central Veins in a resource that averages 7.9 g/t gold.

Northern Star also had drills turning this year at Goodpaster, an earlier staged gold discovery about another 800 meters north on the Pogo Mine property.

Core from these mineralized intercepts at Goodpaster looks identical to Central and Liese veins, providing evidence that the two zones may have once been contiguous and have since been separated by a fault that runs between them along the Goodpaster River. Geophysics indicate that the Goodpaster discovery could be quite large and the mineralization may extend off the Pogo property to the west.

The discoveries made at Pogo show the gold mineralizing system in the Goodpaster is quite robust and there is plenty of evidence a lot more gold is yet to be found across the larger district.

Millrock Resources Inc., a project generating mineral exploration company that has long believed in the larger potential of the Goodpaster District, has pulled together a large portfolio of mining claims covering some of the most prospective gold exploration ground around the Pogo Mine property and an extensive geological database that supports the idea that the district represents a large gold mining camp.

Millrock's growing Goodpaster portfolio includes West Pogo, a block of mining the project generator acquired in 2015 that appears to cover further continuations of the Pogo gold Northern Star is tracing to the northwest.

This year, the project generator expanded its Goodpaster portfolio to roughly 163,200 acres.

"We have amassed a dominant land position and intend to do our best to discover one or more gold deposits on the claims we have staked," said Millrock Resources President and CEO Greg Beischer.

In addition to West Pogo, these properties include Shaw-LMS, which covers a prospective corridor extending roughly 19 miles southwest from West Pogo; North Pogo, a largely overlooked area on the north side of the Goodpaster Batholith, a large igneous intrusion that is considered the source for the gold being mined at Pogo; East Pogo, which covers several prospects on the east side of Northern Star's Pogo property; and Divide, a property that Millrock staked about 25 miles southeast of the Pogo Mine.

Millrock's 2019 exploration focused primarily on West Pogo, where the company completed geophysics and other surface work to refine drill targets on this property that looks to blanket expansions of the high-grade gold deposits at Pogo.

Millrock's ability to substantially expand and explore its Goodpaster portfolio this year is due largely to a C$1 million investment by EMX Royalty Corp., a company that has found success in generating royalties through low-cost property acquisition and early-stage exploration.

In addition to 7.14 million Millrock shares plus warrants to acquire further equity in the project generator, EMX now owns significant royalty interests on Millrock claims in the Goodpaster district.

EMX Royalty CEO David Cole said a combination of Millrock's ideas and Northern Star's exploration success is what enticed his company to invest in the Goodpaster District.

"Northern Star has implemented an aggressive drilling program that has resulted in some nice discoveries being made along the trend of mineralization," he said. "That caught our eye, and we recognize this as a prospective, geological terrain."

Millrock's Divide claims sit in a stretch of the Goodpaster District that has caught the eye of global gold mining companies, as well as junior mineral explorers.

Stone Boy Inc, a partnership between Sumitomo Metal Mining (95 percent) and Sumitomo Corp. (5 percent), has been exploring the Ink and Fog properties in this area for more than two decades.

High-grade gold similar to Pogo and bulk tonnage mineralization have been identified on these adjacent claim groups sold to Northern Star earlier this year.

"Another great stretch of country in a very good stretch of geology across Alaska," Northern Star Beament said in May, referring to the area southeast of Pogo where these Stone Boy claims are found.

This stretch of geology also attracted Newmont, which staked the Healy claims just south of Ink in 2011. At the time, the gold major was not focused on the Goodpaster District. A massive regional survey of the gold-rich areas of eastern Alaska, however, identified the Healy property as the most prospective.

Newmont optioned the claims to Northway Resources Corp., an exploration company formed in 2018 and went public in August of this year.

"We have the advantage of picking up where Newmont left off, following multiple years of systematic regional exploration which has led to the definition of numerous drill-ready targets which have never been tested," said Northway Resources President and CEO Zachary Flood.

Northway tested the first gold-arsenic-antimony target Newmont turned up with a maiden drill program on the Healy property this summer.

While Northway explores south of Ink, Tectonic Metals Inc. is investigating the Tibbs property on the north side of Northern Star's newly acquired Stone Boy claims.

Tectonic was founded by former executives of Kaminak Gold Corp., the company that advanced Coffee Gold in the Yukon from a grassroots prospect to a gold mine project Goldcorp Inc. (now Newmont Goldcorp) was willing to pay more than half a billion dollars for. Now the team is exploring the same geology as it trends east into Alaska.

"It is good to see that the successful Yukon explorers are now recognizing there is great potential on the Alaska side of the Tintina Gold Province, and the Goodpaster Mining District in particular," said Beischer.

Several high-grade gold occurrences have been encountered during past drilling and trenching at Tibbs. This historical work, however, never turned up the large flat-lying structures that were being mined at Pogo during its early years.

The recent discovery of the Central Veins at Pogo shows that these horizontal structures are not easy to find, even when they are lying next to an established mine with the geology well understood.

Tectonic, however, is not immediately focused on the potential for hidden horizontal veins. Instead, the explorer is focused on expanding the multiple high-grade vertical gold structures that have already been identified along a rough 3,500-meter corridor on the property.

"This property still has not been tested from that perspective," Tectonic Metals CEO Tony Reda said, referring to the search for vertical veins at Tibbs.

Grey Lead is a prime example of a high-grade vertical gold vein at Tibbs. Previous drilling at Grey Lead cut 5.7 meters of 19.14 g/t gold across the vein and a trench dug by Tectonic during the 2018 season encountered five meters of 38 g/t gold. 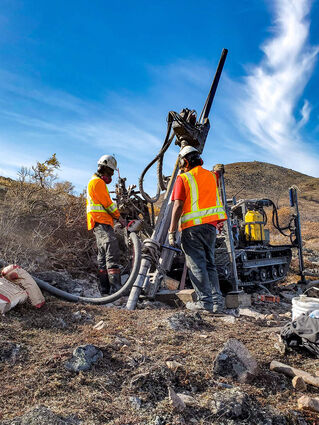 After compiling historical exploration data and carrying out its own sampling and mapping program during 2018, Tectonic is testing the potential of expanding several high-grade gold targets along a 3,500-meter trend at Tibbs with a rotary air blast drill program that got underway in August.

Taiga Mining Company, one of Alaska's largest and most successful placer gold mining companies, has staked placer claims just downstream from Tibbs. While the company has not yet begun any mining in the Goodpaster district, the company's interest and exploration in this area not renowned for its alluvial aurum is a further reminder that gold is where you find it.