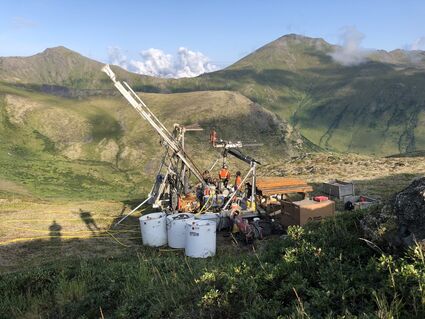 A drill tests Sunshine, one of many metal-rich volcanogenic massive sulfide targets that have been identified across Trilogy Metals' Upper Kobuk Mineral Project in the Ambler District.

Trilogy Metals Inc. is closing in on the completion of a feasibility study for Arctic, the first of a series of mines the company envisions being developed across the Upper Kobuk Mineral Projects in Northwest Alaska's Ambler Mining District.

To provide the additional data needed to elevate Arctic to the feasibility level, Trilogy completed 24 holes during 2018 to gather geotechnical and hydrological information at the proposed tailings dam, waste rock facility and grinding mill locations.

For 2019, Trilogy Metals budgeted US$7 million to carry out the hydrological, geotechnical, water management, tailings facility design, and other work needed to put the finishing touches on the feasibility study for Arctic, expected to be finalized in the first half of 2020.

While Trilogy focuses on readying Arctic for permitting, Australia-based South32 Ltd. is investing in Bornite, a large copper-cobalt deposit about 16 miles southwest of Arctic that is second in the pipeline of Ambler District mine development projects.

Early in 2017, South32 agreed to invest up to US$30 million into exploration at UKMP as part of an option to acquire a 50 percent stake in UKMP by paying an additional US$150 million and other considerations.

Over the 2017 and 2018 exploration seasons, South32 invested US$20.8 million in exploration focused on expanding and upgrading Bornite.

Based on this and previous drilling, an updated resource for Bornite was calculated earlier this year.

With none of cobalt yet upgraded to the indicated category, the Bornite open-pit hosts 124.6 million metric tons of inferred resource averaging 0.017 percent (45 million lb) cobalt.

To ready Bornite for a preliminary economic assessment, South32 invested the US$9.2 million balance of its option commitment on roughly 8,000 meters of infill and expansion drilling in 12 holes; additional metallurgical work to optimize copper recoveries and determine the next steps for the recovery of cobalt; and initial engineering studies.

In addition to advancing Bornite and Arctic, Trilogy carried out a US$2 million exploration program, funded equally by Trilogy and South32, that investigated earlier staged deposits and targets along a VMS belt that stretches roughly 60 miles (100 kilometers) across the Ambler District.

To refine targets for further sampling and drilling, this 2019 regional program began with a district-wide VTEM (versatile time domain electromagnetic) and ZTEM (z-axis tipper electromagnetic) geophysical surveys flown over both the Cosmos Hills, which host Bornite, and the Ambler Belt, which hosts Arctic.

After compiling the data, Trilogy and South32 decided to complete six holes at Sunshine, where historical drilling tapped substantial widths of massive sulfide mineralization similar to the nearby Arctic deposit.

In 1997, Kennecott Mines estimated that Sunshine hosts 20 million metric tons of resource averaging 1.4 percent copper, 2.5 percent zinc, 0.5 percent lead and 28.1 g/t silver. While not compliant to modern standards, this historical resource demonstrates the tenor and potential of the deposit.

These Sunshine intercepts shed a light on the wider potential of Trilogy's large land package in the Ambler Mining District.