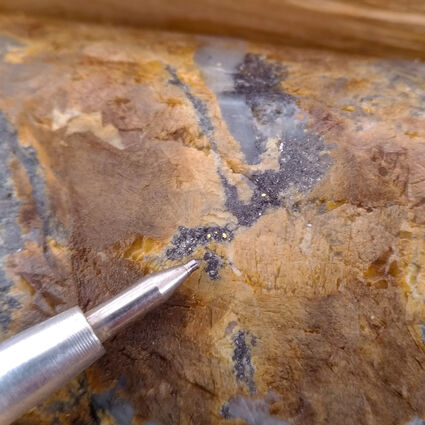 Visible gold encountered during the 2019 drilling of the Raven target on Victoria Gold's Dublin Gulch property in the Yukon.

While ramping up operations at its Eagle Gold Mine in the Yukon, Victoria Gold Corp. continued to explore the larger Dublin Gulch property where this newest large scale mine in the Yukon is located.

For 2019, these efforts focused largely on testing Raven, which was discovered last year at the Nugget zone about 13 kilometers (eight miles) east of the Eagle deposit currently being mined.

The Victoria Gold exploration team, however, are particularly excited by the results of trenching carried out at Raven late in the 2018 season.

The exploration at Raven is being conducted from a 25-person exploration camp established at Nugget zone last year. This allows the exploration to be carried out separately from the important work of ramping up production at the Eagle Gold Mine.

As drills were turning at Raven, Victoria Gold was wrapping up construction on the Eagle Mine.

The mineral exploration turned gold producing company broke ground on pre-development activities at Eagle in 2017 and began earnest development of the open-pit, heap-leach pad and recovery facilities in 2018.

By July of this year crews were stacking ore on the heap-leach pad.

Running about a month ahead of schedule, Victoria poured the first gold at Eagle in mid-September.

Eagle is expected to produce 200,000 oz of gold annually over an initial 10-year mine life. This plan is based on 123 million metric tons of reserves averaging 0.67 g/t (2.66 million oz) gold, according to a feasibility study completed in 2016.

These reserves are found at Eagle Gold, the original deposit, and Olive, a satellite deposit about 3,000 meters to the northeast.

At the time of the feasibility study these deposits hosted 180.72 million metric tons of measured and indicated resource averaging 0.63 g/t (3.63 million oz) gold.

The 2016 reserves are the portion of these measured and indicated resources that are included in the Eagle Gold mine plan. Future mine plans could elevate more resources to reserve status, which would add years of production to Eagle.

With drilling since the completion of the feasibility study growing the resources, such mine extensions seem likely. 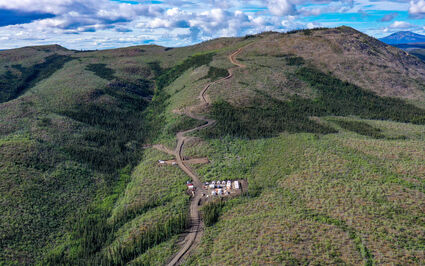 A 25-person camp at the Nugget zone allows exploration at Raven and other gold targets across the wider Dublin Gulch property to be carried out separately from ramping up production at the Eagle Gold Mine.

According to a resource calculation completed at the end of 2018, Eagle hosts 198.72 million metric tons of measured and indicated resources averaging 0.64 g/t (4.08 million oz) gold.

"The additional drilling at Eagle has converted inferred oz to indicated oz, increased overall measured and indicated oz and maintained grade, which resulted in an additional 450,000 oz gold before mining has begun," McConnell said.

The updated resource is for the immediate Eagle Mine area only and does not include the 9.5 million metric tons of measured and indicated resource averaging 1.08 g/t (329,000 oz) gold in the Olive-Shamrock area.

Now it appears that the Raven target and the larger Nugget zone could add further resources across the larger Dublin Gulch property.

CORRECTION: On Dec. 9, 2019 this article was updated to more accurately state the position of Raven to Eagle Gold Mine, about 13 kilometers to the northeast.