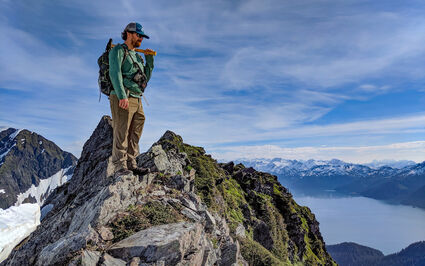 Matt Ellis, the resource specialist for Chugach Alaska's land and resources department and a shareholder descendant of the corporation, investigates a mineral prospect on Chugach land in the Kenai Fjords.

Stretching along roughly 400 miles of Alaska's southern coast – from the north end of the Southeast Alaska Panhandle near Icy Bay to the tip of the Kenai Peninsula near Homer – the Chugach Alaska Corp. region epitomizes Alaska beauty.

This 10 million-acre region along Gulf of Alaska coastline is carved with majestic fjords and bays teeming with fish, birds and marine mammals, and vistas of mountains and glaciers rising above and cutting through dense forests of hemlock and spruce.

In addition to the abundant subsistence, fishing, tourism and timber resources, the Chugach region is rich in minerals. Copper, zinc, chromium, titanium, platinum and gold are among the many metals that have been discovered and historically mined in this resource-rich area covering Prince William Sound and lower Cook Inlet.

For Chugach Alaska, one of the 12 land-holding Alaska Native regional corporations formed after President Richard Nixon signed the Alaska Native Claims Settlement Act into law in 1971, finding a balance between developing these minerals and other resources in the area and conservation is "driven by purpose, guided by tradition."

"A hallmark of the Chugach philosophy is our consideration for how the decisions we make today will impact the future health of the corporation," Chugach Alaska Executive Vice President of Lands and Resource Development Josie Hickel told Mining News. "With every decision we make, we ask ourselves whether we're creating a more valuable, sustainable Chugach for shareholders not only today, but for their children and grandchildren tomorrow."

To gain an understanding what role mining might play in this decision-making process, Chugach has begun to investigate the mineral potential in areas of historical mining on lands it owns in the region.

Under the Alaska Native Claims Settlement Act (ANCSA), Chugach is entitled to roughly 378,000 acres of full fee estate and 550,000 of subsurface estate to be managed for its shareholders.

As stewards of this beautiful and resource-rich region of Southcentral Alaska, Chugach seeks a balance between safeguarding the heritage of its nearly 2,850 shareholders, conserving the natural beauty and resources of this area that has been their home for thousands of years, while also ensuring economic opportunities for the people of the region.

With federal conservation areas such as the Chugach National Forest and Kenai Fjords National Park covering much of this region, however, realizing the economic opportunities that could come from developing mineral and other resources on its lands, which sometimes lie within these national parks and forests, can be complicated.

"As many are aware, the Chugach National Forest is approximately 98 percent inventoried roadless from the 2000-era Clinton Roadless Rule, which frustrates our rights for access to resources where we own the subsurface," Hickel told Mining News.

Port Gravina is located on Prince William Sound between the communities of Valdez and Cordova. Granite mined from this Southcentral Alaska locale could provide materials for infrastructure, development, construction and repair projects throughout Alaska and the Pacific Northwest.

Work completed so far includes quarry development, laydown pads and road linking the mine to the dock, which is currently under construction. The first shipments of granite from Port Gravina are expected to be shipped to Valdez and Seward for marketing in 2020.

Projects such as this lies at the heart of Chugach's balanced strategy.

Beyond mining granite that can be used for coastal infrastructure projects along Alaska's massive coastline, Chugach Alaska has recently resumed exploration of the other mineral resources known to exist on its lands.

While a report detailing the results from this work is not yet available, early indications are that Chugach's 2019 exploration turned up some intriguing targets for follow up exploration.

Based on work carried out in the 1970s, it is estimated that the Copper Bullion prospect on Chugach lands on Knight Island hosts 1.8 metric tons of resource averaging 0.57 percent copper, 42.4 percent iron, 0.15 grams per metric ton gold, and 3.16 g/t silver.

Latouche Island, on the other hand, hosts a major copper producing mine from early in the 20th century. From 1908 to 1930, the Beaston Mine on Latouche Island produced roughly 182.6 million pounds of copper and 1.47 million oz of silver from 5.43 million metric tons of ore averaging 1.65 percent copper and 8.72 g/t silver.

Chugach Alaska also plans to explore lands it owns within and adjacent to the Wrangell-St. Elias National Park, which hosts the world-renowned Kennecott copper mine.

Another thing that is important to Chugach is that any development in the region provide jobs for its shareholders that live there.

Chugach Alaska Services, an Alaska Native focused staffing service, is particularly well suited for supporting mineral exploration in the region and across the state. 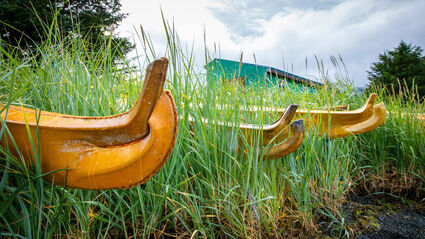 Bidarkas are traditional kayak-type boats used by Chugach shareholders and their ancestors for subsistence hunting and other excursions along the Gulf of Alaska.

EDITOR'S NOTE: "Purpose, tradition guide Chugach Alaska" is the 11th article in a 13-part series that investigates what the Alaska Native Claims Settlement Act means for Alaska's mining sector and its future. The remaining articles will continue to dig deeper into each of the land-holding Regional corporations; the mining lands that they own; and the services they offer to the mining sector. As a life-long Alaskan that has written about mining here for more than a decade, it is my hope that this series will provide a better understanding of ANCSA and serve as a guide to mining companies seeking to do business in The Last Frontier. For further information on ANCSA see An Alaska Native claims primer for miners published in the February edition of North of 60 Mining News.