Can DC agency shorten mine permitting? 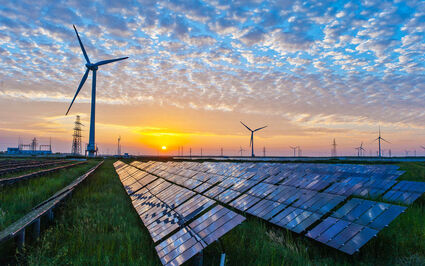 The development of green energy infrastructure in the United States is pushing up the demand for a wide variety of metals, from base metals such as copper and molybdenum to critical minerals such as graphite and rare earths.

SPARKS, Nev. – The notoriously long timeline for permitting a mine in the United States may soon be shortened. This reprieve is not from the various renditions of mine permit reform that has been introduced to Congress over the past decade but from an agency in Washington D.C. that most people have never heard of – the Federal Permitting Improvement Steering Council (FPISC).

Alexander Herrgott, executive director of FPISC, drew the nervous laughter he was expecting when he opened his speech at the American Exploration & Mining Association's Annual Meeting with, "I'm from Washington and I'm here to help."

The palpable skepticism of the mining leaders in the room is largely the result of previous promises of "help" from the nation's capital never coming to fruition or delivered with a wrapping of red tape.

Herrgott, who has worked for the better part of 15 years on infrastructure issues in Washington D.C., understands the frustrations that come with attempting to gain the permits needed to develop large, complex and economy building projects in the U.S.

"The person in Fish and Wildlife service might be in Denver talking to the BLM field manager in New Mexico, talking to an Army Corp of Engineers, the National Park Service representative in Las Vegas; and all of those individuals are not necessarily motivated by the same definition of success which is actually building the project or permitting the project," he shared as an example of the disarray often met when a project is trying to gain permits from multiple federal agencies.

He also knows that the long permitting timelines for complex projects, and the frustration that comes with that, can be greatly reduced by encouraging early coordination and synchronization of the myriad of federal regulatory agencies, their state and local regulatory counterparts. as well as the numerous other stakeholders involved in permitting large projects in the U.S.

For now, however, the mining sector can only look on longingly as pipelines, roads, wind farms and other infrastructure in America benefits from the streamline permitting facilitated by FPISC, which is what the council was established for.

This could change, thanks to Alaska Gov. Michael Dunleavy and proponents of the Round Top rare earth element project in Texas, which have requested that mining be included in the sectors eligible for the permitting improvements offered by the council.

One agency to bind them all

The Federal Permitting Improvement Steering Council was created by Title 41 of the Fixing America's Surface Transportation Act (Fast-41), which was established in 2015 to improve the timeliness, predictability, and transparency of the federal environmental review and authorization process for eligible infrastructure projects.

The council is an independent entity that sits outside and above the other agencies as a coordinating element.

"It doesn't have any jurisdiction over any organic statute but what we do is bring all those federal elements together to adjudicate disputes and cut the BS," Herrgott said.

"When two agencies are in a dispute, I have the statutory authority to escalate it to the office of management or budget and make the decision for them and that's not subject to judicial review. It's the strongest legal endgame that exists," the FSPIC executive director added. "We haven't used it yet because it's the mere threat of it that makes us a reliable entity for the administration."

The council's main tool for ensuring the project stays on this timeline and the agencies are held accountable is the Federal Infrastructure Permitting Dashboard, which tracks the progress of FPSIC-eligible projects

The ability of FPISC and Fast-41 to meet their mandates was strengthened by President Trump's Executive Order 13807, which requires federal agencies to process environmental reviews and authorization decisions for "major infrastructure projects" as one federal decision. This means that all federal agencies with environmental review, authorization, or consultation responsibilities for major infrastructure projects to develop a single environmental impact statement (EIS) for such projects, sign a single record of decision (ROD) and issue all necessary authorizations within 90 days.

Interestingly, the world-class Donlin Gold Mine project in Alaska was the first project to receive a joint record of decision under Executive Order 13807.

"The Corps and BLM in Alaska are pioneering this joint decision to show the public that their federal government can work together and make sound decisions on environmental reviews," Col. Michael Brooks, commander of the Army Corps Alaska District, said during the 2018 signing of the ROD. "It is a great step forward."

While Donlin Gold was eligible for a joint decision under E.O. 13807, this did automatically translate to mining being an eligible infrastructure project under Fast-41.

"Mining is currently not covered as a project, as an eligible sector. However, one of the sectors, conventional energy, includes coal mining, natural gas extraction, and shale," Herrgott told the audience gathered for the Dec. 4 luncheon at the AEMA annual meeting.

The FPISC executive director said that this is a discrepancy he must resolve.

Alaska Gov. Dunleavy is making the case that proposed mining projects should be eligible under Fast-41, especially those producing minerals critical to infrastructure.

Herrgott said the American Wind Energy and Solar Energy associations have expressed concerns over sourcing the minerals needed for renewable energy in the U.S., many of which are mostly or wholly imported from foreign countries.

"So, the fact that moly (molybdenum) for wind or the other 25 elements that are needed for solar panels, that we would not add the feedstock for renewable energy under conventional energy as an infrastructure item is somewhat asinine to me," he said. 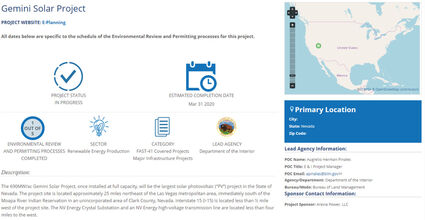 "Designating the Graphite Creek project as a high-priority infrastructure project will send a strong signal that the U.S. intends to end the days of our 100 percent import-dependency for this increasingly critical mineral," the Alaska governor wrote in his nomination letter.

Such a designation would also send a strong message that mining projects are the foundation of America's infrastructure sector and should be eligible for FPISC.

The prospect of mining being eligible for the Federal Permitting Improvement Steering Council had many gathered at the AEMA luncheon believing that Herrgott's promise of help from Washington D.C. may be more than a joke to loosen up the audience.

Or, as one mining leader whispered to his colleague, "I like this guy!"

More information on FSPIC and the permitting dashboard can be found at https://www.permits.performance.gov/