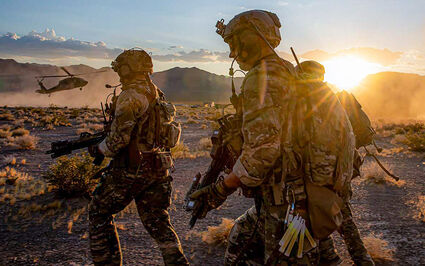 From the communications systems in the helmets of these Green Berets to the UH-60 Blackhawk helicopter they are about to board, much of the U.S. military equipment and weapons systems depend on the properties of rare earths.

From helmet mounted radios to laser guided missiles, rare earth elements (REE) are an essential ingredient to the advanced hardware used by the U.S. military. These high-tech metals, however, are not produced in America, forcing the Pentagon to depend primarily on China for its supply.

As part of a joint armed forces effort to establish a domestic source of rare earths, the U.S. Army is looking to invest in the processing facilities needed to ensure a reliable supply of these important ingredients in military weaponry and other high-tech devises.

According to Mining News sources, the Army sent out memos last month to a select group of companies that are advancing potential U.S.-based rare earth processing plants requesting information on the costs to develop separation facilities that can produce heavy rare earths, which tend to be the least abundant but most highly prized of the 17 elements that fall into the REE category.

The Army said it is looking into funding up to two-thirds of the costs required to establish at least one domestic facility that can separate these heavy rare earths into the individual metals needed for military hardware.

This is the second such rare earth query by a branch of America's armed forces and seems to be part of a larger potential Pentagon-private sector partnership to establish a complete "mines-to-magnets" REE supply chain in the U.S. and break China's near monopoly on the production of these critical minerals and the high-tech and military devices that require the special attributes this unique set of elements provides.

Two companies with rare earth deposits in the U.S. – Texas Mineral Resources Corp., which is advancing the Round Top critical minerals project in western Texas, and Ucore Rare Metals Corp., which owns the Bokan Mountain REE project in Southeast Alaska – already have plans to develop processing facilities related to their proposed rare earth mines and intend to respond to the Army request for information.

According to a preliminary economic assessment published in July, a mine at the Round Top project in Texas would produce 2,212 metric tons of rare earths per year, including healthy supplies of heavy rare earths the Army is seeking, such as yttrium, dysprosium and scandium. According to current calculations, the deposit at Round Top is large enough to supply REEs at this rate for nearly 140 years.

"We should have the ability to satisfy the urgent need in the U.S. to establish a rare earth supply chain, provide an inroad into supplying technology metals into the electric vehicle and green energy market and utilize Round Top's proximity to rail and road transport to supply industrial minerals into the domestic U.S. market," said Texas Metal Resource Chairman Anthony Marchese. "Given the projected 100-plus-year mine life, Round Top has the unique potential to serve as a reliable long-term partner to both the U.S. government and multiple essential industries."

The Dotson Ridge deposit at Ucore's Bokan Mountain project hosts 79 million metric tons of indicated resource averaging 0.6 percent (63.54 million pounds) total rare earth oxides. While not particularly high-grade, roughly 40 percent of the rare earths at Dotson Ridge are classified as heavy REEs, which is what the Pentagon is particularly interested in.

Ucore completed a preliminary economic assessment in 2012 that outlines an underground mine at Bokan Mountain envisioned to produce 2,500 tons of rare earth oxides per year during the first five years of full production.

"The U.S. Department of Defense is now pursuing the ways and means of establishing HREE separation capabilities within the U.S.," Ucore Rare Metals Chairman Pat Ryan said in November. "Without a doubt, this highly focused opportunity fits hand-in-glove with Ucore's HREE advantages, and our already substantial financing pipeline from the state of Alaska. We look forward to advancing our multi-point solution to the emergent U.S. HREE supply chain."

The Alaska funding mentioned by Ryan is in the form of a loan from Alaska Industrial Development and Export Authority.

In 2014, the Alaska Legislature authorized AIDEA to invest up to US$145 million to help finance the development of a mine at Ucore's Bokan Mountain rare earth deposit on Prince of Wales Island and a REE separation facility, which is envision to be built at the Southeast Alaska port town of Ketchikan.

According to Reuters, a joint venture between Lynas Corp. and Blue Line Corp. has also been invited to submit a proposal to the Army.

Lynas operates a REE processing facility in Australia, currently the only one outside of China, and Blue Line Corp. is a privately held chemical company based in Texas.

The primary focus of Lynas-Blue Line partnership is the same subset of rare earths that the Army is interested in investing in.

"The group of materials we're looking at doing are the heavier rare earth materials and there's no commercial plant in the world that is actually separating these materials other than inside China," Blue Line CEO Jon Blumenthal told Fox Business' Lauren Simonetti earlier this year. "And these are very strategic materials that are used for a number of high-tech and defense applications."

Rare earth companies looking to take advantage of potential funding by the Pentagon must respond to the Army request for information with a detailed business plan, including where they will source their REE feedstock, by Dec. 16.

The Army's letter to potential heavy REE producers, marks the second branch of the military to query the mining sector about establishing a domestic supply of rare earths. The first such memo, sent out by the Air Force in July, asked America's fledgling rare earth sector for information on both mines and processing facilities.

The Air Force and Army requests mirror, and are likely related to, July directives from the White House to establish domestic production of rare earth metals and magnets.

Title 3 of the Defense Production Act of 1950 provides a U.S. president the authority to incentivize the domestic industrial base with the goal of expanding the production and supply of materials critical to the U.S. Authorized incentives include loans, loan guarantees, direct purchases and purchase commitments, and the authority to procure and install equipment in private industrial facilities.

To make such a determination, the material being incentivized must be essential to national defense; U.S. industry cannot reasonably expect to provide the material in a timely manner without presidential action; and actions under the section are the most cost effective, expedient, and practical alternative method for meeting the need.

With China's firm control over markets and pricing, President Donald Trump determined that rare earths fit these criteria and made five determinations that domestic production, separation and manufacturing of this suite of high-tech metals is "essential to the national defense" of the U.S.

The president sent requisite determinations to the Pentagon and Senate Committee on Banking, Housing and Urban Affairs that makes the case that each of the five segments of the U.S. rare earth supply chain meet the criteria set out under the Defense Production Act.

"Without presidential action under section 303 of the act, United States industry cannot reasonably be expected to provide the production capability for rare earth metals and alloys adequately and in a timely manner," Trump penned in the memos.

The language in all five presidential determination memos was effectively the same, with each relating to different links of a U.S. rare earth supply chain, from mines to magnets.

The July request by the Air Force is closely related to the first determination and the Army letter is directly associated with the second. This seems to indicate that we could see additional letters go out asking pertinent industry leaders to provide costs and information on light rare earth processing and REE magnet production.

It seems that the Pentagon is ready to invest the money it takes to establish a mines-to-magnets rare earth sector in the U.S., something that would be difficult for the private sector due to China's ability to control pricing with its near monopoly on the sector.

"For years now, we've seen more studies than I can count on the dangers of import dependency, given the criticality of rare earths to every major advanced weapons platform," Dan McGroarty, who previously served in senior positions at the Pentagon and White House on critical minerals told Mining News earlier this year.

"The presidential declarations suggest that the table is being set for federal action to encourage the reestablishment of a U.S. rare earths supply chain," the critical mineral policy expert who now serves on the advisory boards of Texas Mineral Resources and USA Rare Earth added.

President Trump and the Pentagon's interest in rare earths follows subtle threats out of Beijing that finished products containing REEs needed by the military could be added to China's list of export restrictions to the U.S.

According to the United States Geological Survey Mineral Commodities Summary 2019, the U.S. was 100 percent reliant on imports of rare earths during 2018, most of which either was imported directly from China or originated there.

While roughly 80 percent of the world's rare earths are mined in China, the country's big advantage is control over the separation link in the REE supply chain. Lynas' facility in Malaysia is the only place outside of the Middle Kingdom where rare earths are separated into useable metals. Even the Mountain Pass Mine in California's Mojave Desert, the only rare earth mine currently on American soil, sends its concentrates to China for further processing.

China, in turn, often manufactures the individual rare earths into magnets and other higher-end products needed by the U.S. high-tech and national defense sectors.

This puts the Department of Defense in the awkward position of depending on a strategic rival for key ingredients of its military hardware and gives China a trump card in the trade war with the U.S.

While a potential deal between Washington D.C. and Beijing has cooled the trade battle, rare earths remain too strategically important to be reliant on limited overseas sources for their supply. As such, it is likely the White House and the Pentagon will continue to view investments in a domestic REE supply chain as money well-spent. 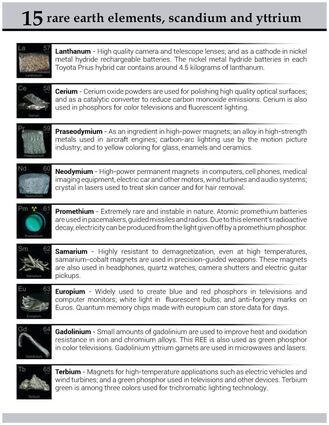 Click on this photo for a graphic that lists the 17 rare earths and a brief description of their uses.