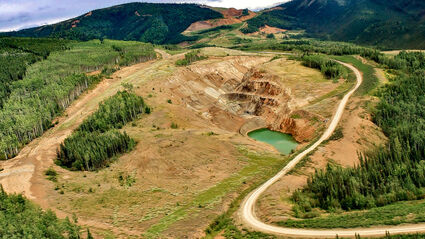 Golden Predator is expanding oxide gold resources around previously mined areas at Brewery Creek with the goal of resuming operations at this past producing mine in the Yukon.

Golden Predator Mining Corp. Jan. 15 announced a more that 50 percent increase in the oxide gold resources at its Brewery Creek Mine project in the Yukon.

Located about 35 miles (55 kilometers) east of Dawson City, Brewery Creek is the site of an open-pit, heap-leach mine that produced 277,170 ounces of gold over a seven-year span beginning in 1996.

"We are delighted by the substantial increase in oxide resources which offer a significant impact on the longevity and economics of the Brewery Creek Mine," said Golden Predator Mining CEO Janet Lee-Sheriff. "Although a higher gold price certainly contributed to the increase, we are also very encouraged by the favorable impact of a more systematic application of geological constraints on the deposits."

With the goal of resuming mining at Brewery Creek, Golden Predator drilled 177 holes last year aimed at expanding and upgrading the heap-leachable oxide resource at Brewery Creek. This, along with 23 other holes drilled since the last resource estimate, have yet to be incorporated in the resource calculation for this project.

Assay results are still rolling in from the 2019 program, which was carried out from August through November, and the company plans to have the resource updated once all the assays are in.

Golden Predator has also commissioned a feasibility study that outlines plans for what is expected to be a staged ramp up of operations at Brewery Creek.

The initial phase of this plan is expected to involve the reprocessing of material on the original heap leach pad where, according to Viceroy's records, roughly 10 million metric tons of run-of-mine ore averaging 1.5 g/t gold sits. This comes to 525,094 oz of gold stacked on the pad. This leaves nearly 248,000 oz of gold on the pad, when you subtract the metal recovered by Viceroy.

Kappes, Cassiday & Associates, a mine engineering and metallurgical firm known for its heap leach expertise, is completing the feasibility for Golden Predator's planned first phase of mining at Brewery Creek, which will involve reprocessing this material.

This detailed analysis will focus solely on remediating and reprocessing the heap leach pad as a means of fast-tracking revenue for Golden Predator and development of the site for mining.

In mid-2019, Golden Predator received a formal notification from the Yukon government confirming the validity of existing Quartz Mining License and Water License for Brewery Creek, meaning the junior mining company is authorized to restart mining activities that follow the previously assessed mine plans without further assessment and review.