Golden milestone marks beginning of a new chapter for mine North of 60 Mining News – March 1, 2020 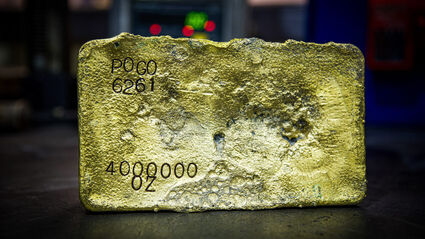 This roughly 56-pound bar contains the 4-millionth ounce of gold produced at Northern Star's Pogo Mine in Alaska.

Goodpaster Mining District, Alaska – At noon on Friday, Feb. 21, 2020 a roughly 815-ounce gold bar containing the 4 millionth ounce of gold recovered from rich deposits at the Pogo Mine was cooling. While this was a momentous occasion for an Interior Alaska gold mine that began commercial production in 2007, it also seemed to mark a changing of the guard for this operation that is transitioning to a renewed life under the ownership of Northern Star Resources Ltd.

"It is awesome for Pogo – to pour four million ounces out of any single deposit is huge!" Northern Star Resources Executive Chairman Bill Beament told Mining News following the pour. "For the company, we have not had Pogo long – 14 or 15 months – so, it is great to be involved in a short window of that."

"More important for us is we would like to pour the 8-millionth ounce and I am sure that we will out of this deposit," he added.

When Northern Star acquired Pogo at the end of 2018, the mine was reaching the end of its originally planned mine life and gold output had been falling due to the amount of ore available for cut and fill mining, which had been the mining method employed by Sumitomo Metal Mining, the previous owner of the high-grade underground gold operation.

This made Pogo the ideal asset for Northern Star, a Perth, Australia-based miner that has expanded from start-up with a single mine in 2010 to an international mining company with a market cap of around A$10 billion (US$6.7 billion).

This rapid growth has come from acquiring high-quality underground gold mines that were reaching the end of their original mine-lives but held exemplary potential for a good underground mining company that was willing to make the sweat equity and the capital investments into the exploration and develop needed to breathe new life into the operation.

When Northern Star bought Pogo, the management laid out an 18-month strategy to transition the Interior Alaska gold mine into another tier-1 asset that could produce at least 300,000 ounces of gold per year for more than a decade.

The mine's output for 2019, however, was much lower than that. During this transitional year, the operation churned out roughly 157,000 oz of gold. While only about half of Northern Star's vision for its first asset outside of Australia, by the closing of the year gold production was back in the realm of Pogo's true potential.

And, Northern Star foresees even stronger results over the coming months. 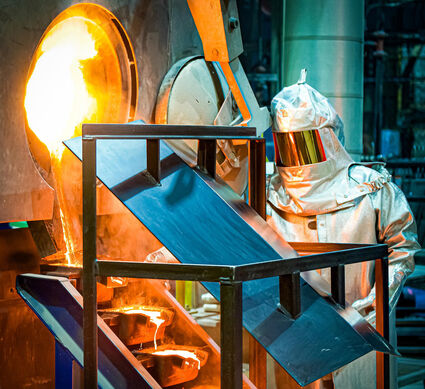 The 4-millionth ounce of gold being poured at Pogo.

"December was a great month, but we will have quarter-on-quarter improvements going forward. The March quarter will be much better than the December quarter," Beament told Mining News in an exclusive interview. "The June quarter is a really important quarter for this operation because that is when we believe, as a company, that Pogo will start showing everyone what the sustainable long-term production rate of this asset will be."

The entire interview with Northern Star Resources Executive Chairman Bill Beament can be read in An Aussie perspective on Alaska mining, a 20 questions for 2020 interview in the current edition of North of 60 Mining News.