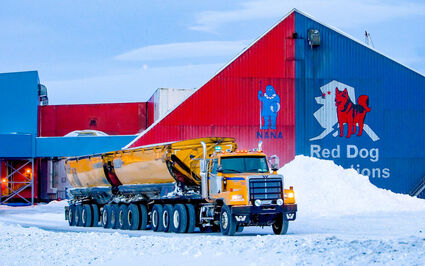 A load of zinc concentrate leaves the Red Dog Mine bound for the Delong Mountain Transportation System port, where it is stored until the summer shipping season in Northwest Alaska.

Teck Resources Ltd. April 20 reported increased zinc and lead production at Red Dog, despite the adjustments and precautions taken to protect the health of the workforce and residents in nearby Northwest Alaska communities during the COVID-19 outbreak.

The higher production was primarily due to substantially higher mill throughput, which offset lower grades and recoveries.

This increased throughput is not as much about improved mill performance as weather. Last year, extreme winter weather forced a closure of the Delong Mountain Transportation System road that connects the Red Dog Mine in Northwest Alaska to the concentrate storage facility at the port for an extended period during January and February. As a result, the concentrator at Red Dog was idled for 20 days due to limited concentrate storage capacity at the mine site.

First quarter operating costs at Red Dog were US$72 million, which is 11% higher than a year ago, primarily due to higher mill throughput and material movement as well as higher administration costs. Unit operating costs, however, were lower than the same period last year. 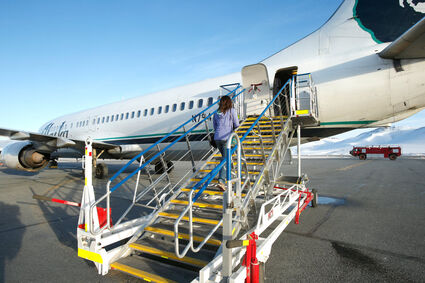 A Red Dog worker that has cleared a mandatory COVID-19 pre-flight screening boards an Alaska Airline charter bound for the Northwest Alaska zinc mine.

At least some of the increased administrative and other costs are likely due to measures implemented to prevent the spread of COVID-19. These protocols include pre-flight virus screenings for all personnel travelling to Red Dog; bans on travel from the mine to communities in the NANA region of northwest Alaska where the operation is located; extended work rotations; and 14-day isolation for all workers coming from outside Alaska before being allowed at the mine.

"We continue to respond and take action on the challenges presented by COVID-19 to protect the safety and health of our employees, contractors and the communities in which we operate," Teck Resources penned in its quarterly report. "At Red Dog, we have implemented significant travel restrictions and modified schedules due to the fly-in, fly-out nature of the operation."

Thanks in part to these measures and the efforts and diligence of the people working at the mine, Teck said it continues to maintain normal production levels at Red Dog.