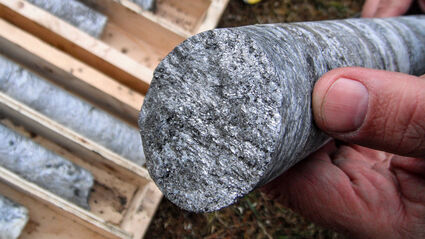 Core from drilling into the Graphite Creek deposit in western Alaska. The STAX graphite found here is being tested for a wide array of potential high-tech and industrial applications.

In addition to a potential source for anode material in the lithium-ion batteries powering electric vehicles and storing renewable energy, the graphitic carbon contained in the enormous Graphite Creek deposit in western Alaska may also work well in high-purity coatings, synthetic semiconductor diamonds, fire suppressing foams and other applications.

Graphite One Inc., the company advancing the Graphite Creek project, is working with an unnamed industrial partner to identify value added products that could be produced from the graphite ahead of finalizing a prefeasibility study that details a potential mine at this project about 35 miles north of Nome.

"We are excited about the potential for value-added applications which identify flake graphite from Graphite Creek as a unique resource," said Graphite One President and CEO Anthony Huston.

Previous testing has shown that the Graphite Creek graphite has distinctive characteristics that make it a particularly good fit for use as an anode material in lithium-ion batteries and other high-tech applications.

The company has coined the term STAX, an acronym to describe the spheroidal, thin, aggregate and expanded graphite found in the Graphite Creek deposit.

Each of these attributes occurring naturally or in a semi-finished form of the graphite has the potential to be used for various industrial applications.

Over the past year, Graphite One's industrial partner has been using a 12,000-pound sample of Graphite Creek material to further identify potential industrial applications.

The lithium-ion batteries that power EVs is expected to be an enormous drive for the graphite market in the coming years.

Researchers are predicting that the number of light duty electric cars and trucks traveling global highways is expected to expand by more than 80,000 percent, from 1.2 million in 2015 to more than 965 million passenger EVs by 2060. Based on the roughly 150 pounds of graphite that goes into today's fully electric models, these vehicles alone would need more than 65 million metric tons of graphite over the next four decades.

The anodes of these batteries require spherical graphite, a form that is usually created by processing large flake graphite but happens to occur naturally at Graphite Creek.

Early tests found that more than 74 percent of the STAX flake graphite could be turned into the spherical graphite needed to pack into rechargeable batteries without milling.

This is a monumental achievement considering that only about 40 percent of the best-performing flake graphite found in any other known deposit can be converted to spherical graphite, even with the use of high-end processing equipment.

The shape would be of little consequence if the material did not perform well in batteries.

Graphite One says results from testing a representative sample of spherical carbon coated Graphite Creek graphite submitted to a leading automotive manufacturer under a non-disclosure agreement are promising, and further testing is being carried out.

In addition, the company's industrial partner has been carrying out separate tests on coated and uncoated spherical STAX graphite, with promising results that suggest the graphite is well suited for lithium-ion batteries.

To fully take advantage of all the attributes STAX graphite has to offer, Graphite One has opted for a processing flow sheet that purifies the concentrates in the beginning. While opposite of what is done at other graphite operations, this inverted purification flow sheet would allow the company to redirect all the material that is not ideal for rechargeable battery anode material toward other value-added applications.

One of these value-added applications is a conductivity enhancement additive for cathodes in alkaline batteries.

Graphite One's industrial partner has converted non-spherical STAX material into an ultra-high purity graphite which may qualify for conductivity enhancement grades. The process has produced two products with purity levels exceeding 99.99% carbon that have been used extensively in alkaline batteries and have also been supplied to a leading alkaline battery company.

Graphite One said initial feedback has been positive and testing is ongoing.

Some STAX graphite might find its way into fire suppression foams.

Thermally purified STAX graphite has been turned into an expandable flake product, which was subsequently formulated into fire retardant foam concentrates.

Graphite One and its unnamed partner have conducted small scale demonstrations highlighting the increased effectiveness of STAX graphite in extinguishing oil fires. Full scale Class B testing per military specifications is slated to take place in the third quarter of this year.

Another potential application that is garnering military interest is the use of graphite in paints and coating that suppress radio waves and infrared. These coatings could also be used for anti-corrosion and ultra-high precision metal working applications.

Technical data from testing ultra-pure STAX graphite dispersed in paints and coatings has been introduced to the Defense Logistics Agency, which is responsible for sourcing materials into America's military supply chains.

Purified versions of STAX material have also been converted into synthetic diamonds with the use of industry-standard technologies that involve high pressure and temperature.

Initially, a 6.5-gigapascal press was used to generate synthetic diamond dust. This is an essential test to validate the ability of STAX material to be converted into synthetic diamonds. Not every graphite precursor can produce diamonds with this method as some lose integrity when under high pressure. STAX graphite, however, successfully formed diamond dust under the lower temperature and pressure conditions that could be used for metal working applications, such as pigments for lapping compounds and ultra-hard coatings on drilling, cutting, and grinding equipment.

The second phase of this development work subjected STAX material to higher temperatures and pressures for longer periods, resulting in the synthesis of gemstone-quality diamonds of three carats and larger.

The next stage of testing will involve doping large synthetic diamonds with elements to produce next-generation semiconductor materials that could replace silicon wafers in critical applications and high-temperature applications. 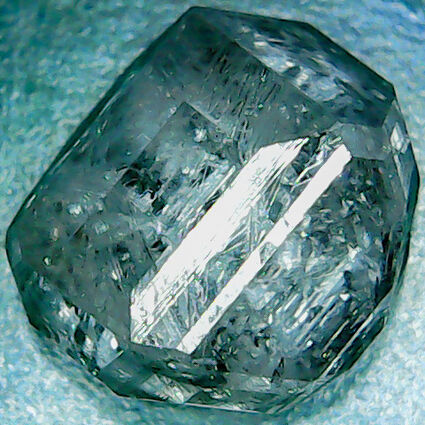 These semiconductor materials have potential uses in rocketry, heat sinks, new generation electronics, fast-moving aerial systems, and specialty engines. The concept is being reviewed by the engineering community at the U.S. Army Redstone Arsenal in Alabama and Army Research Laboratory in Pennsylvania. Graphite One said its industrial partner is working on delivering prototype samples of new semiconductor devices made from Graphite Creek materials.

"All of the above examples of potential upsides coupled with Graphite One's smart design choices and selection of an environmentally responsible processing flow sheet further support the value of the Graphite Creek deposit and the upcoming PFS that will be unveiled within the next few months," said Huston.

This coming study is expected to detail the engineering and economic parameters of a mine at Graphite Creek and an advanced material processing facility to refine concentrates produced at the mine into the coated spherical graphite used in lithium-ion rechargeable batteries and other graphitic materials for industrial and high-tech applications.