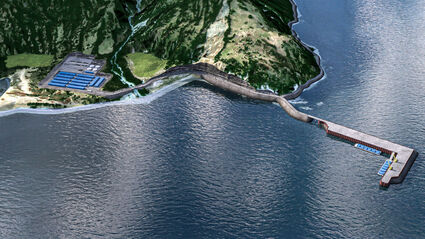 A computer rendering of the proposed Diamond Point Port, which would be on the Cook Inlet end of the all-road alternative the U.S. Army Corps of Engineers has determined to be the best access to the proposed Pebble copper-gold-molybdenum-silver mine in Southwest Alaska.

The U.S. Army Corps of Engineers has determined that a road and pipelines around the north shore of Iliamna Lake is the most environmentally sound route to access the proposed Pebble copper-gold-molybdenum-silver mine in Southwest Alaska.

Referred to as Alternative 3 in the draft Environmental Impact Statement for Pebble, this roughly 85-mile northern land-based transportation route would connect the Pebble mine site to Cook Inlet without the need for a ferry to transport supplies and concentrates across Iliamna Lake.

One of the primary components of the EIS process in the United States is the evaluation of multiple alternatives to determine which, if any, are environmentally, economically, and technically sound.

In Pebble's case, three alternatives were under consideration. The primary differences in these alternatives are the proposed routes that connect the planned Pebble Mine to a deep-water port on Cook Inlet.

• Alternative 1, Pebble Partnership's proposed alternative, considers a road south from the mine site to Iliamna Lake, a ferry to the south shore of the lake and then a road southeast to the proposed Amakdedori Port on Cook Inlet.

• Alternative 3 follows a similar route as Alternative 2 except instead of a ferry to the west end of Iliamna Lake, the road would continue east to Pile Bay where it would connect to the proposed road to Diamond Point.

David Hobbie, Alaska District Regulatory Division Chief, Army Corps of Engineers, informed the media on May 22 that his agency has determined that the all-land access in Alternative 3 is the "least environmentally damaging practicable alternative" for Pebble.

The primary reason for this decision is concerns expressed by the U.S. Environmental Protection Agency, Fish & Wildlife Service and others about transporting supplies and metal concentrates produced by a mine at Pebble across Iliamna Lake.

Northern Dynasty Minerals Ltd., which is the sole owner of the Pebble Partnership, said that while the ferry option proposed in Alternative 1 was its preference, the all-road alternative "presents several compelling benefits over the lake ferry options."

"From a cost perspective, the various transportation alternatives evaluated as part of the Pebble EIS over the past several years are similar," said Northern Dynasty Minerals President and CEO Ron Thiessen. "We had thought the slightly smaller wetlands footprint associated with the lake ferry alternatives might make them preferable to the USACE and other regulatory agencies, but they clearly have judged an all land-based route to be superior from an environmental perspective."

Opposition to the proposed Pebble Mine called the emergence of Alternative 3 as Army Corps of Engineers' preferred option a "bait and switch" tactic by the lead agency for the Pebble EIS. They also said the proposed route crosses Alaska Native lands that will not be accessible.

"Today's announcement by the Corps about the northern transportation route doesn't add up, as the major landowners have already and continue to say Pebble is not and will not be allowed to use their property," Pedro Bay Village Council President Keith Jensen said on May 22.

Thiessen said the Pebble Partnership intends to work with each of the landowners along the northern corridor and believes it will secure the authorizations needed to build and operate the transportation system.

"There are clear operational benefits associated with a single mode transportation system versus multi-mode, and we're confident the northern corridor can be built and operated safely in partnership with local villages and landowners," he said. 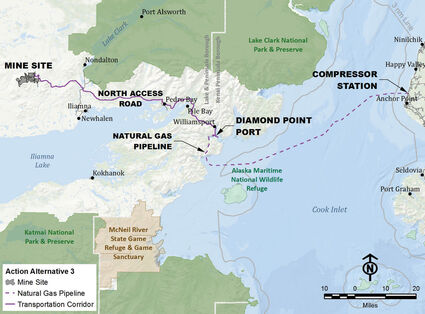 In addition to eliminating the need for an ice-breaking ferry running across Iliamna Lake, the all-land route would include pipelines to transport copper-gold and molybdenum concentrates produced at Pebble to the port, which would significantly reduce the number of trucks traveling the road each year.

"From the beginning, we have been clear that developing an environmental impact statement for a project like Pebble is an iterative process with no predetermined outcomes," he said. "The USACE's selection of the 'northern transportation corridor' as LEDPA (least environmentally damaging practicable alternative) clearly shows this to be the case, and demonstrates the permitting process working as designed to incorporate the views of expert regulatory agencies and members of the public to identify the best development option."