The valuable lessons of Kitsault Valley 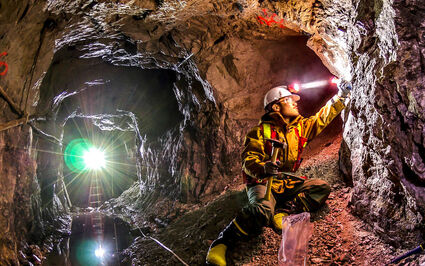 A geologists collects samples from one of the historic Dolly Varden underground mines during the 2012 exploration of the high-grade silver property in the Kitsault Valley.

Mining found its way to the remote Kitsault Valley in northwestern British Columbia around 1910, bringing with it the ups and downs typical of mining regions in a bygone era.

Roughly 29 miles southeast of Stewart and just outside of reach of the Golden Triangle, this area of B.C. has proven to be a treasure chest of minerals such as silver, gold, copper, zinc, lead, and molybdenum for more than a century.

The first boom in the Kitsault Valley came with the Dolly Varden Silver mine.

During their heyday, the first generation of mines at Dolly Varden produced 1.3 million ounces of silver from 36,000 tons averaging a grade of 35.7 oz/ton silver from 1919 to 1921.

Altogether, roughly 20 million ounces of silver was produced from the mines on the Dolly Varden property over a 40-year span beginning in 1919.

Phelps Dodge entered the Kitsault Valley in the late 1970s to mine rich deposits of molybdenum found there, a brief venture that saw Kitsault go from a shiny new mining community to one of the most unusual ghost towns in the span of two years.

In 2005, the Kitsault was bought by Krishnan Suthanthiran for $5.7 million and the Indian-American businessman has invested into maintain and updating this ghost town that remains largely as it was left in 1980.

"There are 2.4 kilometers (1.5 miles) of waterfront teaming with fish and crab, and along the manicured boulevards apple trees hang low with fruit that no one has ever picked. The town is surrounded by snow-capped mountains that have never been skied and there are eight glacier-fed streams that support salmon within a 20-minute walk of the town center," according to a website created for the town.

With more high-grade silver being found around the historic Dolly Varden mines and 110 million tons of molybdenum remaining in the area, Kitsault could see a new era of mining in the coming years.

The Dolly Varden Mines were first discovered by four Scandinavian prospectors in 1910 and from a dream of one of their relatives, the name 'Dolly Varden', a heroine of Charles Dickens' novel "Barnaby Rudge".

The Scandinavian prospectors sold Dolly Varden to Chicago financiers in 1915 and the new owners would commission the construction of a railway to haul silver-rich ore to tidewater at Alice Arm for shipping to a smelter.

Alfred Taylor's Taylor Engineering Company was contracted to build the Dolly Varden Mines Railway, an 18-mile narrow-gauge railroad built in the rugged mountains of northern BC towards the end of World War I.

During these early days, the Dolly Varden mine produced a small tonnage of high-grade silver ore that was direct shipped without benefit to base metal smelters, mainly to the nearby Granby Mines Anyox copper smelter.

Trouble, however, arose for the mines as differences between the Dolly Varden Mines and Taylor Engineering that culminated in a court battle that turned the rights of the mine over to Taylor.

The newly established Taylor Mining Company now had possession of both the Dolly Varden Mine and railroad. With the financial backing of several key players, including Herbert Hoover before his presidency, the Dolly Varden Silver Mines would resume under Taylor in earnest and produce several million ounces of silver.

In 1922, however, Taylor was forced to forfeit his title to the Dolly Varden property due to financial difficulties with the price of silver dropping below US$1/oz, coupled with the high costs associated with production and transportation at the mine.

For nearly the rest of the decade the Dolly Varden Mines Railway would be utilized mainly for logging operations, while the mine would be leased to the Britania Mining and Smelting Company.

But all operations would finally cease once the Great Depression hit and the Dolly Varden Silver Mine would not see any significant changes until 1946.

Changing of an era

It was 1946 when Torbrit Silver Mines Ltd. bought the property and built and operated a 350-metric-ton-per-day, hydroelectric-powered mill, and flotation concentrator plant on the Dolly Varden property.

Also, during this time, the railway would be converted into a road and the single-track railroad would be put to rest.

Over a decade of mining beginning in 1949, the Torbrit mine produced 18.5 million oz of silver.

Over the balance of the 20th century, the high-grade Dolly Varden changed hands several times but a mine was never reestablished on the high-grade silver property.

The newest owner, Dolly Varden Silver Ltd., has outlined roughly 44.4 million oz of silver around the historic mine on the property.

At least one silver miner, Hecla Mining Company, has bought into Dolly Varden and is keeping close tabs on the progress of the silver explorer. This could be a sign that a new era of mining could be in store for this high-grade silver property.

Lights are on, but no one is home

As the Dolly Varden Silver mine lay idle during the second half of the 20th century, molybdenum became a hot commodity and U.S.-based Phelps Dodge needed a town to house a workforce to mine roughly 109 million tons of this metal identified in the Kitsault Valley.

Molybdenum, which provides hardness and corrosion resistance to alloys including those in the nose cones of rockets during the Cold War-era arms race, was in high-demand but short supply during the 1970s.

Nearly 10 million tons had been mined from the Kitsault Valley from 1967 until 1972. With molybdenum price once again on the rise, Phelps Dodge made a move to mine the remaining lodes of molybdenum later that same decade.

The mining conglomerate, however, needed workers and decided to build the town of Kisault, an enormous construction project in this remote region of northwestern B.C.

A site was chosen, drafts were drawn, plans were made, and the building boom began.

It was not long before the deep-water fjord at Kitsault was bustling with ships delivering the supplies to build more than 100 single-family homes, as well as duplexes and apartments buildings.

This city building project included the construction of a modern hospital, shopping center, restaurants, banks, theater, and a post office. All the services were underground, including cablevision and phone lines. This overnight town even boasted a state-of-the-art sewage treatment plant and the cleanest running water in the province.

As the paint was drying on the fresh drywall, the first families started moving into the newly built mining town of Kitsault in 1980.

As mining families began making a new life in this "pristine Shangri-La" and the mine began operations, all seemed to be well in Kitsault. By 1982 the price of molybdenum collapsed under the pressures of the 1982 recession and an increase of supply of this alloy metal as byproduct from copper mines.

The excitement of a new town and boom of success died as quickly as it was built. Just 18 months after the mine opened, operations and Kitsault dreams were shuttered.

With nothing left to stay for, the pristine town that cost an estimated $50 million to build was abandoned and the big gates leading into Kitsault were locked, creating an "out-of-sight, out-of-mind" time-capsule ghost town that is much like an illusion out of the corner of your eye.

In 2011, Suthanthiran bought this unique mining ghost town and formed Kitsault Resorts Ltd., with a vision of reviving this mining Shangri-La in northwestern British Columbia.

"Today, the only inhabitants are a caretaker, who looks after cutting the lawns, a family of foxes and the occasional grizzly bear that wanders in to scavenge fallen fruit," according to the Kitsault Resorts website. "Up the valley under a lush green old-growth forest still lies 110 million tons of molybdenum."

With the area around Kitsault rich in molybdenum, silver, copper, gold and many other metals, maybe a new era of mining families will revive this 1980s-era mining ghost town.