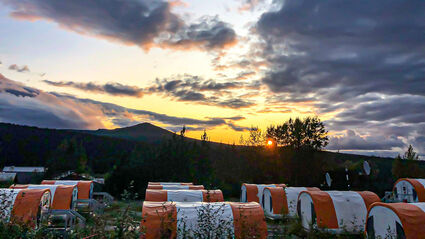 The sun sets over the Bornite camp during the 2019 season at the Upper Kobuk Mineral Projects. Typically a bustling place during the summer, the camp is unusually quiet this year.

Trilogy Metals Inc. July 8 confirmed that the 2020 field programs at the Upper Kobuk Mineral Projects in Northwest Alaska has been deferred due to the COVID-19 pandemic.

Ambler Metals LLC, a joint venture operating company equally owned by Trilogy Metals and South32 Ltd., had budgeted US$22.8 million for the 2020 program. Following the novel coronavirus outbreak, Ambler Metals met with NANA Corp., the Alaska Native Claims Settlement Act (ANCSA) regional corporation for Northwest Alaska, to determine whether a summer field season at UKMP could progress while protecting communities. These discussions included the potential of delaying the start of field work to July or August.

Ambler Metals, however, determined that any potential gains from a 2020 field program were not worth the possible health risks to its employees, contractors, and the communities in Northwest Alaska.

"Ambler Metals gave due consideration to the merits of carrying out an abridged work program at the UKMP. However, given the continued uncertainty resulting from COVID-19, ongoing safety concerns (despite added safety protocols including physical distancing, protective equipment and testing) and the fact that, due to COVID-19, the planned field season had already been delayed to the point at which any field season would provide limited critical path benefits, the decision has been made not to proceed with a 2020 field season," Trilogy Metals penned in a July 8 statement.

The company said that it is disappointed that the deferred field program will affect the Northwest Alaska residents that would have worked at the project this summer.

Ambler Metals does not expect the suspension of the 2020 filed program to delay the overall development timeline for UKMP.

The feasibility study for developing a mine at Arctic does not require any further field data and is on pace to be finalized in the third quarter of this year.

A 2018 prefeasibility study for Arctic detailed plans for an open-pit mine and a 10,000-metric-ton-per-day mill that is expected to produce more than 159 million pounds of copper, 199 million lb of zinc, 33 million lb of lead, 30,600 ounces of gold and 3.3 million oz of silver annually over a 12-year mine-life.

Arctic related activities during the second quarter focused mainly on updating the 2020 resource and metallurgical drill program for resource definition and variability testing and planning for the next stages of engineering studies to advance the project towards permitting and development.

The successful development of a mine at Arctic and the other project in the pipeline in the Ambler District will require road access. The permitting of a roughly 211-mile road that would connect the district to Alaska's highway system is in its final stages.

Earlier this year, the U.S. Bureau of Land Management released the final Environmental Impact Statement for the Ambler Mining District Industrial Access Project, more widely known as the Ambler Road. A Record of Decision, which will finalize the federal permitting process for the project, is expected to be issued by the end of July.

In the meantime, Ambler Metals has continued to make headway by updating the geological model of Bornite, a large copper-cobalt deposit about 16 miles southwest of Arctic.

The updated geological model for Bornite will help identify priority targets for future drilling at Bornite.

Regional project activities during the second quarter consisted mainly of updating the geological model for Sunshine, a prospect with substantial widths of volcanogenic massive sulfide (VMS) mineralization similar to Arctic, which is about eight miles to the east.

Work aimed at advancing UKMP toward development without the need for a field program is expected to be the primary focus for the balance of 2020. 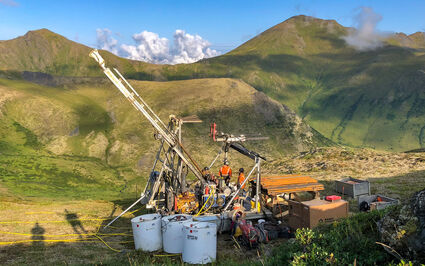 A drill tests Sunshine, one of many metal-rich volcanogenic massive sulfide targets that have been identified across Ambler Metals' Upper Kobuk Mineral Project in Alaska.

"Ambler Metals will continue advancing the metallurgical test work on both Sunshine and Bornite over the last half of the year which will provide a better understanding of metallurgical performance in an operating scenario and advancing Arctic to the next level of mine design with identifying engineering studies such as trade-off studies and optimization studies of previously completed work," Trilogy Metals wrote.

The partners will also take this time to ready for future exploration of the other known historical deposits and occurrences to explore across the roughly 353,400-acre UKMP land package. This work will include the compilation of historical exploration data from across the Ambler VMS Belt, which includes Arctic, Sunshine and nearly 30 other known prospects found across the large Northwest Alaska property.