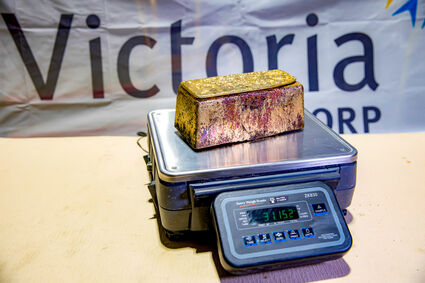 Weighing in at 1,001 ounces, this first bar of gold produced at the Eagle Mine was poured in September of last year.

Victoria Gold Corp. July 7 announced that its Eagle Mine in the Yukon produced 13,828 ounces of gold during June. This is the best month for the mine that achieved commercial production on July 1.

"Since restarting stacking mid-March, we have steadily seen an increase in monthly gold production," said Victoria Gold President and CEO John McConnell. "With the increasing price of gold, our June production has a value of greater than C$30 million."

Gold output during May was lower than originally expected due to slowed production due to COVID-19 travel restrictions limiting the availability of workers from outside of Yukon.

With the majority of the Eagle employees being Yukon residents, mining, crushing and stacking ore on the heap leach facility, continue to perform well.

Once up to full capacity, the Eagle Mine is expected to average roughly 210,000 oz of gold annually, or about 17,500 per month, over the initial 10-year mine life.

The company also announced that Paul Gray has been promoted to vice president of technical services.

Gray, who has been with Victoria since 2013, has served as the vice president of exploration over the last three years. He will continue to lead exploration and geology activities on the Dublin Gulch property, and will now also oversee metallurgy, mine planning, environmental and permitting. Victoria said Gray's broad technical knowledge combined with over 25 years' experience in mine exploration, development and operations will be invaluable as it continues to grow both gold production and resources.