History Hunter tells a 125-year saga of Dublin Gulch mining, and the rise of the largest gold mine in the legendary Yukon North of 60 Mining News – July 17, 2020 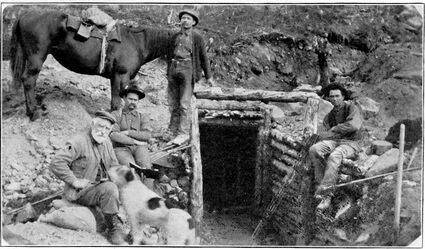 Dugald MacLachlan (left) and three other unidentified miners at the entrance of an underground mine dug at Olive in 1914. Today, Olive is encompassed by Victoria Gold's Dublin Gulch property and is one of the sources of ore for Eagle, the largest gold mine ever to operate in Canada's Yukon Territory.

After 11 years of triumphs and travails, Victoria Gold Corp. has achieved commercial production at Eagle, the largest gold mine in the Yukon's storied history. Like any modern hardrock gold operation, however, the tale of the Eagle Gold Mine reaches much further back into the annuls of history. In "Dublin Gulch, A History of the Eagle Gold Mine", Michael Gates tells a 125-year saga of dedication, determination, and a small mining company with large aspirations of building a mine for Yukoners.

"This story begins with the early prospectors and dreamers and ends with the opening of the Eagle Gold Mine," said Gates. "It is the story of the little company that could, Victoria Gold; of a veteran miner, (Victoria Gold President and CEO) John McConnell, and of his committed team of determined men and women who beat the odds and turned the dream into a reality."

This is a dream being shared by the First Nation of Na-cho Nyak Dun, who called this part of Yukon home for thousands of years before the earliest prospectors brought their golden dreams to Dublin Gulch.

"The First Nations people have used this area for millennia for traditional harvesting; however, we recognize the economic benefits in modern times that we can choose to participate in," Na-cho Nyak Dun Chief Simon Mervyn penned in a forward for the book.

In 2011, Victoria and Na-Cho Nyak Dun signed a mutually created benefits agreement that ensures the citizens of the "Big River People" First Nation gain from the opportunities provided by the Eagle Gold Mine.

With the Eagle Gold Mine reaching commercial production on July 1, Na-Cho Nyak Dun and the larger Yukon community are realizing the benefits of Yukon's newest and largest mine. Roughly half of the nearly 400 workers at Eagle are Yukoners, which is a significant boost to a territory with a total population of less than 40,000 people.

Many of these Yukoners have called the North home for millennia, some can trace their roots to the territory's early Gold Rush days, and others ventured north for the adventure and opportunity the Yukon has to offer – all are new characters in an intriguing new chapter in the history of Dublin Gulch.

"With intestinal fortitude and enormous impact, John McConnell and Victoria Gold are rewriting Yukon's mining history. This book is the story of David in a world of Goliaths," Yukon Premier Sandy Silver inked in the forward. "Here is a small company that put in a Herculean effort to get the Dublin Gulch project off the ground, a company whose primary capital was sharp minds and entrepreneurial spirit."

It is no wonder that Gates, a longtime Yukoner and the territory's "History Hunter", was chosen to chronicle the 125-year saga of prospectors and miners that traced the placer gold in the streams of the Dublin Gulch area before gold was discovered in the Klondike to the hardrock sources that are now feeding the Eagle Gold Mine. 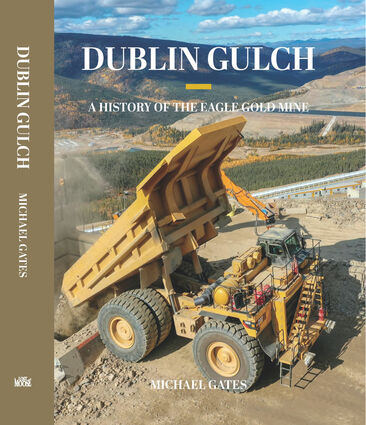 "For well over a century, generations of prospectors and miners sought to unlock the mineral potential of Dublin Gulch", said McConnell. "We are proud to honour their vision and through this book, learn more about and pay our respects to all those who came before us paving the way for the Eagle Gold Mine to develop and benefit Yukon residents and communities for decades to come."

And the stories told by the Yukoners working at Eagle Mine may provide fodder for a new book as Gates continues to chronicle legendary gold mining history of Dublin Gulch and the Yukon.