Pebble could be a vital US metal supplier 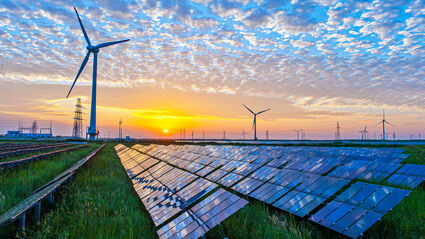 Renewable energy is driving new demand for the copper, molybdenum and silver that would be produced at a future Pebble Mine. According to the USGS, the Pebble deposit also hosts an enormous endowment of tellurium, a metalloid being used for emerging solar energy technologies.

With the federal permitting process coming to a close, it is becoming increasingly likely that a mine developed at the world-class Pebble project in Southwest Alaska could become a significant domestic source of copper, gold and other metals demanded by America's manufacturing sectors.

U.S. Army Corps of Engineers, the lead federal regulator for permitting the Pebble Mine under the National Environmental Policy Act (NEPA), published the final environmental impact statement for Pebble today and plans to issue a record of decision for the mine later this summer.

David Hobbie, chief of the regulatory division for Army Corps of Engineers' Alaska district, said that it will be at least 30 days before the record of decision is issued. This will finalize the federal NEPA process, a major milestone for the proposed mine.

"We have reason to believe that Pebble will be judged to be a project of merit, and will receive its key federal permits under the Clean Water Act and River & Harbors Act this summer," said Pebble Limited Partnership CEO Tom Collier. "The next steps facing the company and the project will be to secure a major funding partner and acquire the state permits necessary to take Pebble into production."

With state permitting expected to take two to three years to complete and another four years for construction, the Pebble Mine could become an important American source of metals by 2027.

The project Pebble Partnership submitted for permitting under NEPA would produce an average of 318 million pounds of copper, 362,000 ounces of gold, 14 million lb of molybdenum, and 1.8 million oz of silver a year over a 20-year mine life.

Depending on the prevailing prices for the metals, copper will make up about 60% and gold 30% of the annual value of the metals produced at Pebble, with the 10% balance coming from other metals.

Besides the molybdenum and silver, Pebble hosts appreciable amounts of three metals considered critical to the U.S. – palladium, a precious metal used in fuel cells, catalytic convertors, and other applications; rhenium, a rare element used in jet engines and high-octane fuels, and tellurium, an extremely rare metalloid that is a vital ingredient to emerging solar panel technologies.

"There's absolutely no doubt there is growing domestic and international market demand for the metal commodities Pebble will produce," Collier said. "Whether it's surging demand for copper to facilitate the US and global transition to a low carbon future, the increasing demand for gold we're seeing in the current economic climate or the other strategic metals our mine will produce, the world needs Pebble."

America's transition away from fossil fuels and toward renewable sources of power will be particularly copper-intensive, as will the requirement for smart grid technology to make the nation's energy transmission and distribution system more efficient.

Electric vehicles, solar and wind power installations, as well as the energy infrastructure required to enable these technologies, will all require substantially more copper than the transportation and energy systems they replace.

World Bank estimates that roughly 550 million tons of copper will be needed for generating and transmitting electricity over the next 25 years, which is nearly as much as humans have mined over the past 5,000 years.

More information on World Bank's forecast for the demand of minerals and metals needed for renewable energy can be read at All clean energy paths lead to mining in the May 13 edition of Metal Tech News – https://www.metaltechnews.com/story/2020/05/13/mining-tech/all-clean-energy-paths-lead-to-mining/229.html

The United States currently imports 35% of its annual copper needs from foreign producers, as well as 32% of its palladium, 82% of its rhenium, 68% of its silver, and more than 95% of its tellurium. 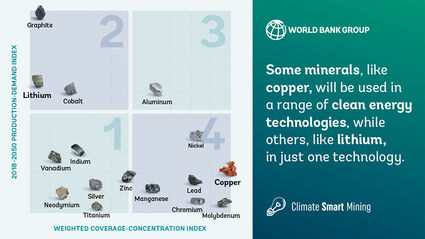 For copper and many other strategic metals, America's import reliance is expected to grow in the future as domestic demand rises faster than supply.

"It is in the United States' best interest to develop reliable and long-term domestic sources of mineral commodities like copper, gold, molybdenum, silver, rhenium and palladium – strategic metals that are critical to the country's economic, energy, military and industrial future," Collier said. "It is equally important to source these minerals from jurisdictions that are known to be leaders in environmental protection, in conserving healthy fish and wildlife populations, as well as in environmental justice and human rights. That description fits Alaska to a tee and is one more reason why Pebble is poised to become one of America's leading metals producers."