64North exploration back in full swing 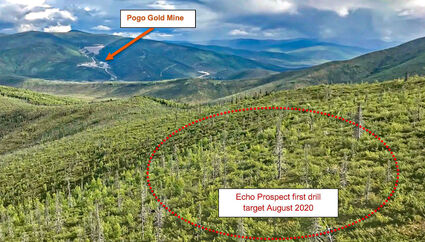 The Echo gold target at 64North is located about five miles northwest of Northern Star Resources' Pogo Mine in Alaska.

Resolution Minerals Ltd. July 27 said it is positioned to carry out the full US$5 million program this year at 64North, a gold exploration project next to Northern Star Resources Ltd.'s Pogo Mine in Alaska's Goodpaster Mining District.

Earlier this month, Resolution announced a financing that will add A$4.6 million (US$3.3 million) to test high priority drill targets across the 64North projects.

Under a deal cut with Millrock Resources Inc. last year, Resolution has the option to earn a 60% interest in this large gold project by investing US$20 million in exploration spending over four years.

While most of this year's work will focus on West Pogo, which lies along the western border of Northern Star's Pogo mine property, the option agreement also includes a commitment to invest US$1 million in regional exploration and rents on other 64North claim blocks.

At West Pogo, drills are testing the Aurora and Echo targets. Regional targets include E1, a bulk tonnage gold target on the Eagle block that shares similarities with Kinross Gold's Fort Knox Mine, and Boundary, a Pogo-style prospect on the East Pogo claim block.

"The prospectivity of the 64North Project is outstanding, with RML in the fortunate position to have four prospects worthy of drill testing and any of which could be the next Pogo or Fort Knox giant sized gold mine," said Resolution Minerals Managing Director Duncan Chessell.

So far, drilling has focused on the Aurora target on the West Pogo claims. Resolution and Millrock began drilling at Aurora in March but COVID-19 disrupted this early season program part way through the second hole.

Drilling resumed at Aurora in June and two more holes have been completed at this prospect that appears to be a western extension of the more than 4 million oz of gold that has been mined and 6 million oz in resources at Pogo.

Resolution is particularly excited about the fourth hole drilled this year, 20AU04, which cut the same host rock as being mined at Pogo for the entire hole. Significant alteration and increasing sulfides at depth led the geology team to extend 20AU04 to a depth of 1,090 meters.

Resolution estimates it will take roughly five weeks to receive assay results from holes three and four due to increased exploration causing a backlog at assay labs in North America.

In early August, drilling at West Pogo will test Echo, a compelling target about five miles (nine kilometers) north of Aurora. This initial testing of Echo is expected to include roughly 950 meters of drilling in two holes.

With a magnetic geophysical survey being flown over the E1 target, the 64North regional work is underway. 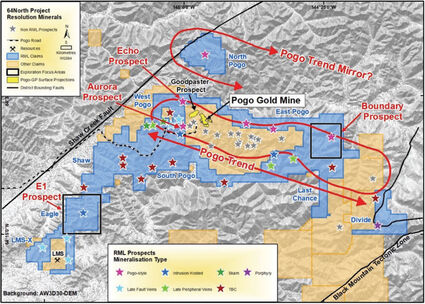 Resolution plans to push a roughly 12-mile (20 kilometers) access trail from the Pogo Gold Mine road to E1 prospect, which will allow for easier access and winter drilling.

A late-season program of trenching, sampling, mapping, and potential shallow reverse circulation drilling is planned to be carried out at E1 in September and October.

A geophysical survey is also slated to get underway next week at Boundary, a high priority prospect with Pogo-style potential at the eastern extent of the Pogo trend. Work carried out this year at Boundary is in preparation for drilling planned for the 2021 season.

"With the Alaskan summer season in full swing and teams active on multiple prospects and drilling high priority targets at the Aurora and Echo Prospects, there is a lot of news flow to come," said Chessell.