It is everyone's patriotic duty to vote when the opportunity arises, but the American System effectively marginalizes many North of 60 Mining News – August 28, 2020 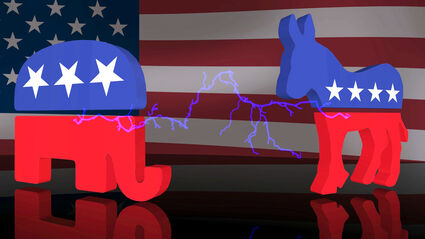 Since most of the Electoral votes reside east of the Pecos, the requisite votes to win the presidential election is typically established before the winter sun sets on Southeast Alaska.

Every four years Americans get the delicious treat of a Presidential campaign during which contenders for leadership of the free world get to stand before the electorate and pontificate about matters they perceive to be of interest to the nation. My perpetual reaction to this humorous exercise is to recall the infamous words of Winston Churchill who noted that "Democracy is the worst form of government, except for all the others."

Of course, thankfully, we do not live in a "democracy" per se, but rather a "democratic republic" wherein all politics are local. It is the states, not the people, who comprise the national government. Nonetheless, the more populous states tend to have the loudest voices, while the more sparsely populated states, like Alaska, tend to be the tail of the political pig.

Thanks to the popular press, Alaskans are quite accustomed to knowing the outcome of the Presidential election well before our polls close. This year might be an exception, courtesy of the pandemic, if only because a larger number of people will strive to cast their ballot by mail or drop-box as opposed to visiting a polling place.

It takes a finite amount of time to process the roughly 130 million ballots that will probably be cast in November. Those hours can be consumed by voters standing in line at the polls while volunteers check each citizen in, or they can be absorbed by government employees examining boxloads of ballots in a central location. In the case of mailed-in ballots, the likelihood of delays in determining the outcome is necessarily enhanced by the bureaucratization of the process.

The fun part of the election is that about 40% of the qualified voters, about 90 million people, will not bother to participate; so, no matter the outcome, our next President will have a constituency of approximately 30% of the electorate.

Ballots, once cast, are funneled into the Electoral College process. No matter how many votes may (or may not) be cast by individuals in any given state, it is the vote of the Electors that choose the President, and the more populous states have more Electors. That vests the Electors with vast theoretical power to ensure that rascals cannot be inaugurated by the mob, even when a large part of the mob decides not to vote.

Since most of the Electoral votes reside east of the Pecos, almost nothing that happens after about 7 p.m. Central Time influences the outcome of the election. (There are 538 Electoral votes and only 128 of them are in the West. In the absence of a very close contest, the requisite 265 votes to win the election will be established before the winter sun sets on Southeast Alaska.)

That raises the question about the utility of Presidential campaigns. Campaigns are characterized by promises made. Since Westerners in general and Alaskans in particular are not likely to influence the outcome of the election, the concomitant promises made to Westerners are hollow at best.

Essentially, our political races are – to use a politically incorrect term - little more than beauty pageants. Of late, however, it seems the choice has been reduced to whom to vote against as opposed to whom to support. What makes this such a hard pill to swallow is that the bulk of our natural resources originate in the western states. If the electoral advantage is in the east, and Easterners have little identification with the needs of those who produce the nation's commodities, it follows that campaign promises that are friendly to resource development by either party are unlikely to be fulfilled.

It is striking that one of former Vice President Biden's platform commitments is to restore the nation's infrastructure. The main obstacle to infrastructure upgrades is NEPA compliance. Even if Candidate Biden were not personally committed to environmental protection in this context, a substantial segment of his political base certainly is, which makes his campaign promise an impossibility.

Likewise, President Trump's commitment to strategic mineral independence is not only burdened by a millstone of environmental statutes and caselaw, but it is encumbered by a personal willingness to refocus any position based on anecdotal input. The case in point being the Pebble Project, which recently concluded the NEPA process only to be required to submit a supplemental modification of its development plan to the Army Corps of Engineers.

America needs a strong President who understands that the nation's resources are not only our history but also our future. Unfortunately, under the circumstances, it is unlikely that the outcome of the election this year will be responsive to the needs of the West. Instead, those of us who care about such matters are condemned to watch the silliness unfold solely for its dystopian entertainment value.