Rising gold, silver, zinc prices help to offset the negative affects COVID-19 has had on 2020 mine production across the state North of 60 Mining News – August 28, 2020 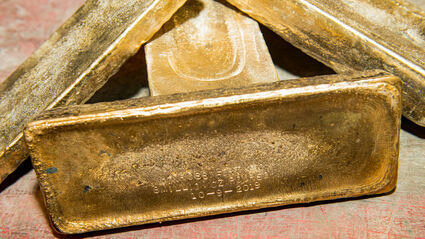 Gold bars from the 8-million-ounce gold pour at the Fort Knox Mine in Alaska. Rising metal prices are helping to offset COVID-related expenses at Alaska's mines this year.

Rising metal prices are helping to soften the blow COVID-19 has landed on Alaska's mining sector in 2020.

While mining has been deemed an essential business in Alaska, which has helped keep the six large mines in the state operating during the pandemic, measures put in place to slow the spread of COVID-19 are weighing on production at some of these operations.

Efforts to flatten the curve on the spread of coronavirus also disrupted several winter drill programs in Alaska, delayed the start of most summer exploration, and even caused some companies to shelve their 2020 programs as a precautionary measure aimed at ensuring their work did not contribute to introducing the COVID-19 virus to rural Alaska residents.

Fortunately, rising gold, silver, copper, and zinc prices is helping to offset some of these production losses and has helped reinvigorate a mineral exploration sector that faltered out of the gate this year.

For Alaska's three mines where gold is the primary commodity – Kinross Gold Corp.'s Fort Knox, Northern Star Resources Ltd.'s Pogo, and Coeur Mining Inc.'s Kensington – this significant rise in gold price is helping to offset some of the costs of doing business during COVID-19 restrictions.

Through the first half of 2020, gold production at the road-accessible Fort Knox Mine near Fairbanks, Alaska has not been affected by COVID-19.

While COVID-19 has contributed to higher production costs at Fort Knox and Kinross' other operations around the globe, much higher gold prices have more than offset these added expenses.

"We have been able to effectively manage COVID-19 impacts on our portfolio of mines during the first half of the year, as our comprehensive pandemic response plan continued to help protect the health of our employees and communities, while supporting the successful continuation of our business," said Kinross Gold President and CEO Paul Rollinson.

Pogo, which is slightly more remote and operated out of a camp, was more directly affected by COVID-19.

Through the first half of this year, Pogo produced 98,693 oz of gold, which is about 25% higher than the first six month of 2019. Northern Star, however, expected this increase to be more substantial but mining and other activities were hampered by COVID-19. This had to do with both travel restrictions that slowed the arrival of key personnel and a coronavirus outbreak at the mine.

"The results at our Pogo mine in Alaska were particularly pleasing given the challenging circumstances emanating from COVID-19, where we effectively managed safe operations with 36 confirmed cases through the quarter," said Northern Star Resources Executive Chairman Bill Beament.

Increased gold production at lower costs demonstrate the outstanding potential of Pogo once the global health challenges have passed.

"We now have a strong insight into the impact of the virus on Pogo and it is clear that this asset will continue to produce at about 75% of its potential while the virus remains in Alaska," Beament said.

While COVID-19 has posed challenges, record quarterly gold production at Pogo and its portfolio of gold mines in Australia, coupled with all-time high gold prices, has resulted in record cashflow for Northern Star during the second quarter of 2020 and bode well for the Aussie miner's future.

"Despite the considerable impacts of COVID-19 at Pogo, the underlying trend of rising production and productivity continued," said Beament. "This further demonstrates the huge potential of this asset in more conventional circumstances."

The remote operation, however, suffered a coronavirus outbreak that is likely to limit worker availability, which may affect second half performance.

Mid-August testing of the 250 workers at the mine turned up roughly 25 positive cases. The Kensington miners that tested positive for COVID-19, all of which are asymptomatic or are showing mild symptoms, were isolated at a hotel in Juneau until cleared by medical providers.

The outbreak is despite coronavirus related protocols at Kensington that include extending worker's rotations at the mine from 14 to 28 days; and required seven-day quarantine and COVID-19 testing prior to starting their four-week rotation at the Southeast Alaska mine.

"Like most companies, our second quarter results were negatively impacted by COVID-19. Most notably at Palmarejo, our strongest performing asset in the first quarter, operations were temporarily suspended due to a decree from the federal government of Mexico," said Coeur Mining President and CEO Mitchell Krebs. "However, with Palmarejo now back in production, our three U.S. operations hitting their strides and the tailwind of higher gold and silver prices, we are anticipating a strong second half of 2020 and expect to continue this momentum into 2021."

While the price of silver has not even neared historic highs, this precious metal has outpaced the impressive price gains of gold this year.

This is good news for Hecla Mining Company, thanks to its Greens Creek Mine in Southeast Alaska.

"Hecla produces one third of all the silver in the U.S., giving investors unique exposure to what we believe will be higher silver prices in the future," Hecla Mining President and CEO Phillips Baker Jr. said in July.

Roughly 90% of the 6.13 million oz of silver from Hecla's U.S. mines during the first half of 2020 was produced at Greens Creek.

This strong production is a testament to a quick response that helped protect the workforce from the potential spread of the coronavirus.

Early on during the COVID-19 outbreak, a 14‑day quarantine was mandated for all visitors to Admiralty Island, where Greens Creek is located. With the addition of strict testing protocols, the Southeast Alaska operation has reduced this quarantine period to seven days. This is expected to reduce the cost associated with protecting the workforce as well as reducing workforce stress.

Thanks to the solid performance at Greens Creek, Hecla reported increases in all the metals it produces, except for gold, from its five North American mines – Greens Creek, Lucky Friday (Idaho), San Sebastian (Mexico), Casa Berardi (Quebec), and Nevada Operations.

These increases are despite temporary COVID-19-related shutdowns at Casa Berardi and San Sebastian.

"I am extremely proud of our workforce's adaptability and commitment in this challenging time which positions Hecla well to improve our cash flow generation in this higher silver and gold price environment," Baker said.

While precious metals prices have soared so far this year, zinc prices tumbled from $1.05/lb going into 2020 to a low of 80 cents in late March.

"The refined zinc market remained under pressure from the slowdown in the automotive sector, due to COVID-19. Most global automotive plants restarted by early May, but at reduced operating rates," said Teck Resources Ltd., which operates the Red Dog zinc mine in Northwest Alaska.

Lower zinc prices, however, was not the only COVID-related challenge for Red Dog.

The lack of available personnel resulting from COVID-19 safety protocols and travel mandates contributed to some maintenance challenges that impacted mill throughput during the second quarter.

"At our Red Dog Operations, travel restrictions and modified schedules remain in place due to the fly-in, fly-out nature of the operation. Maintenance schedules and our ability to respond to maintenance challenges were impacted in the second quarter," Teck wrote in its second quarter 2020 report.

These challenges resulted in both reduced mill throughput and lower zinc grades during the second quarter due to high water levels restricting access to higher grade ore.

Teck expects that mill production at Red Dog will return to normal in the third quarter but says water levels at the Northwest Alaska mine may continue to restrict access to high-grade ore in the second half of 2020 and personnel availability could impact other aspects of the operation.

"Labor intensive activities such as maintenance, mine operations, and projects continue to be impacted by COVID-19 safety protocols," the company wrote.

Despite these challenges, Teck said it expects Red Dog production to return to full capacity as mill throughput and ore grades improve during the second half of the year.

At the same time, zinc prices are expected to improve as global economies recover from the pandemic.

Since mid-year, the price of this galvanizing metal has risen roughly 33% from around 92 cents to above US$1.10/lb.

While COVID-19 has interrupted, delayed, and cancelled 2020 exploration programs across Alaska, the sharp rise in the price of gold has attracted some big money from noted natural resource investors.

One such success story is Freegold Ventures Ltd., which raised C$10.75 million in two tranches that closed in May and June, including C$6 million invested by Eric Sprott.

This bonanza grade intercept was made during a winter drill program that got cut short do to COVID-19 mandates.

The higher-grade gold being tapped in the Cleary Hill vein system has the potential to bolster the overall resource grade at Golden Summit, a highway accessible project adjacent to Kinross Gold Corp.'s Fort Knox Mine property.

HighGold Mining Inc. is another aurum explorer that attracted the attention of prominent resource investors such as Sprott, Franklin Gold Fund, Rob McEwen, and a yet to be named senior gold producer.

This interest was so high that on the day HighGold announced plans to complete an C$8 million private placement, it raised the financing to C$12 million to meet demand.

Commensurate with the increased funds, the company expanded its drill program at the high-grade Johnson Tract gold project in Southcentral Alaska to at least 15,000 meters. 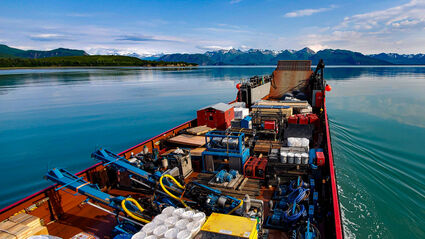 A barge loaded with drills and supplies needed to support HighGold Mining's exploration program at the Johnson Tract gold property in Alaska. With the rising gold price, HighGold's exploration success has drawn strong interest from investors.