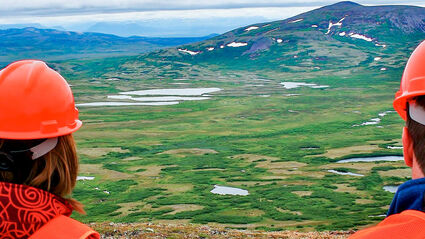 U.S. Army Corps of Engineers has requested mitigation for the 3,000 acres of small lakes, ponds and other wetlands that would be disturbed during the mining of the Pebble deposit.

Much like Mark Twain, who quipped, "The report of my death was an exaggeration," when informed of his obituary in an American newspaper, Politico's report of the untimely demise of the Pebble Mine project in Southwest Alaska was grossly overstated.

On Aug. 22 Politico reported, "The Trump administration is planning to block the proposed Pebble Mine in Alaska early next week ... marking a surprise reversal that could be the death knell for the massive copper and gold project."

Pebble Limited Partnership, the company advancing permitting and potential future development of the mine, says these reports of Pebble's death are grossly exaggerated.

"We firmly believe that the implication pushed by Politico that the White House is going to kill the project is clearly in error, likely made by a rush to publish rather than doing the necessary diligence to track down the full story," said Pebble Partnership CEO Tom Collier.

The Politico report indicated that U.S. Army Corps of Engineers' Alaska office was expected to provide details of the Trump administration's plan to kill Pebble on Aug. 24.

While Politico's sources were correct that Army Corps was planning an update on Pebble, it was not a proclamation aimed at blocking the development of a mine at the world-class copper-gold-silver-molybdenum-rhenium project. Instead, the agency heading the federal permitting for the project sent a letter to the Pebble Partnership outlining expectations for mitigation of the mine project's wetlands impacts.

"The White House had nothing to do with the letter nor is it the show-stopper described by several in the news media over the weekend," said Collier.

The Pebble Partnership CEO said the request for mitigation has been expected for quite some time and the company has already been working over the summer to carry out the work needed to satisfy the mitigation requirements.

Finalization of this survey work and the mitigation plan are needed for Army Corps to issue a record of decision on the Pebble's environmental impact statement, which would finalize the project's federal permitting under National Environmental Policy Act (NEPA).

With the mitigation plan expected within weeks, Pebble Partnership expects little or no delay in the issuance of the ROD.

"The letter does not ask for a delay or pause in the permitting process," said Collier. "This is the next step in what has been a comprehensive, exhaustive two-and-a-half-year review of the project. Nothing in the letter is a surprise to us or them."

After more than a decade of predictions of Pebble's imminent demise, backers of the enormous copper project are accustomed to hearing that the latest federal action "could be the death knell" for mine development.

With a federal permitting decision for Pebble drawing nigh, however, a growing chorus of political, business and opinion leaders are weighing in on whether a mine should be developed at this potential future source of precious, base, and critical metals.

Backed by $150 million of environmental studies carried out over 15 years and a more than 2,000-page final environmental impact statement that shows a mine would not harm the world-class Bristol Bay salmon fishery, the developers of the future Pebble Mine welcome the added attention and scrutiny.

"We're very proud of the work we've done to design an environmentally sound, socially responsible and economically vital project that will fully co-exist with clean water, and healthy fish and wildlife populations in Bristol Bay," said Ron Thiessen, president and CEO of Northern Dynasty Minerals, the company that owns the Pebble Partnership.

Opponents of the proposed mine, however, have called into question the integrity of the federal permitting and the Army Corps that headed the process.

"Environmental activists and opponents of the Pebble project have made baseless and unfounded claims about political interference in the Pebble EIS process, and of regulatory malfeasance by the professional staff of the USACE for months," said Thiessen.

These claims have spurred calls for independent investigations into Pebble and the environmental review process that has taken the world-class mine project to the threshold of being granted federal permitting approvals.

Pebble leaders welcome open and honest dialogue on its mine proposal, and fair and independent investigations into science behind Corps findings.

The USACE released a comprehensive EIS for the project that said the economic benefits of the project could be substantial and that the project can be done without harm to the Bristol Bay fishery," said Collier. "We know there are some who do not support the USACE's findings but just because people don't like the USACE conclusions does not mean their work has not been thorough."

A trio of representatives on the House Committee on Oversight and Reform – Carolyn Maloney, D-N.Y., Harley Rouda, D-Calif., and Jackie Speier, D-Calif. – has called on U.S. Army Inspector General Sean O'Donnell to carry out an investigation into Army Corps' environmental review of Pebble during the 2.5-year EIS process.

"The Committee is concerned that the Army Corps expedited the Clean Water Act permitting and NEPA review process at the expense of a thorough scientific review," the oversight committee members wrote in their request to Army IG. "It appears that this timeline is inappropriate for a hardrock mine of this scale, complexity, and potential regional and state environmental, social, and economic impacts – especially during the ongoing coronavirus pandemic."

In an unexpected twist, Pebble Partnership joined this call for an independent review of the EIS process – though for very different reasons.

"The work of the USACE (U.S. Army Corps of Engineers) on Pebble has been under assault since day one and it is time for this mischaracterization of their integrity to end. The best way to accomplish this is to have the USACE work on the Pebble project reviewed by the inspector general," said Pebble Partnership CEO Tom Collier. "We are confident the IG will find the allegations raised against the USACE to be completely baseless."

As such, the Pebble leaders look forward to having the Army Corps EIS work investigated by an independent oversight office like the Army IG.

"Not only do we welcome the kind of independent scrutiny and professional judgment an inspector general review would bring to the Pebble permitting process, we jumped at the opportunity to add our voice to those in U.S. Congress," said Theisen. "I say, 'bring it on' – we have everything to gain and absolutely nothing to lose."

A small but influential group with close ties to the White House have suggested that President Trump should err towards environmental conservation when it comes to Bristol Bay and the Pebble Mine.

"We've seen a small number of unelected but high-profile conservatives suggest President Trump should put his thumb on the scale when it comes to the final step of permitting at Pebble – the record of decision' we're expecting within weeks," said Collier.

These rumbling gained national attention when President Trump's eldest son, Donald Trump Jr., weighed in on the conservation side of developing a mine at Pebble.

This precautionary stance is despite the fact that Pebble is roughly 100 miles away from Bristol Bay and the EIS found that a mine at Pebble would not affect the health of the Bristol Bay fishery.

When asked by a reporter about Trump Jr.'s suggestion his administration should reject the Pebble Mine, Trump said, "I don't know of the argument yet, but I would certainly listen to both sides, my son has very strong opinions, and he is very much an environmentalist."

Others close to the White House, including Andy Sabin, a major Trump campaign contributor has reportedly also weighed in on the conservation side of the Pebble argument.

Sabin is also one of the named sources in the Politico article on Trump administration plans to block Pebble.

Bass Pro Shops founder and CEO Johnny Morris also has indicated that the Bristol Bay area should be preserved for conservation.

Thiessen agrees with Morris' sentiment and says the Bristol Bay region is large enough for both a world-class fishery and mine.

"The Bristol Bay region is about the same size as Ohio, 40,000 square miles. The commercial fishery is more than 100 miles away as the crow flies, and more than 200 river miles away," said the Northern Dynasty CEO. "Even the 230 sq. mile area around Pebble produces less than one-tenth of 1% of Bristol Bay salmon."

"So, to suggest a single modern copper mine built to the highest standards in the world could materially affect this fishery is absurd to the extreme," he added. "Furthermore, after 2 ½ years of scientific study, the USACE and the Pebble EIS have determined our project will have 'no measurable impact' on any fish population or fishery in the region."

With Pebble nearing the end of its permitting and garnering national attention during a presidential election year in the U.S., Pebble Partnership has launched an outreach campaign targeting the Trump administration, Republican Party and business leaders that support responsible resource development.

"Our campaign is simply a reminder to the White House, to the conservative establishment and US business leaders that the politicization of statutory permitting processes is anathema to rebuilding America's economy, to restoring American jobs and attracting investment in job-creating projects and industries," said Collier.

Pebble Partnership is also rallying political and business groups in Alaska and across the nation that have supported transparent and science-based permitting for Pebble and have spoken out against prior political interference of the project from the Obama administration.

"The number and breadth of Republican, conservative, business and pro-development voices in this country who believe America can develop her resources responsibly, and support American jobs, while producing the minerals we need for economic recovery, military and industrial security and a transition to a lower carbon future is truly overwhelming," Collier said.

One such group of Republicans in Alaska has already come out "in support of the responsible development of the Pebble mine."

In an Aug. 9 resolution, the Alaska Republican Party cited the state's economic recession and budget deficit; jobs and revenue generated by a mine at Pebble; the most extensive environmental impact study in Alaska's history; the proposed mine's minimal environmental impact among the reasons the group "unequivocally supports the development of Pebble mine."

Once Army Corps receives the final information for Pebble's wetlands mitigation plan and issues a record of decision on the proposed mine, the project will then be subjected to two to three years of state permitting.

While there is a lot of work to go before the Pebble Mine is a reality, the death of this copper-gold-molybdenum-silver-rhenium project in Alaska has been grossly exaggerated. 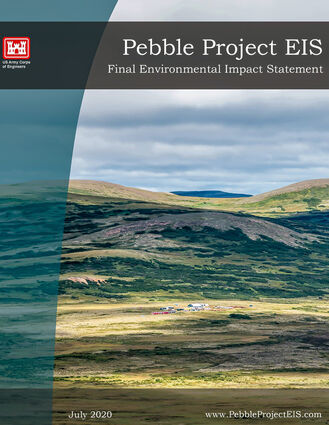