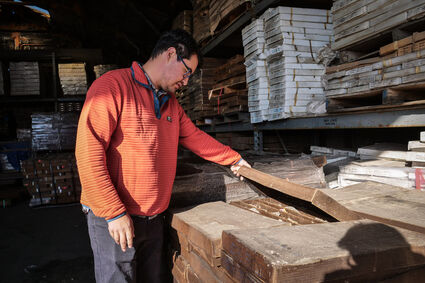 Martin Weiser, a Doyon shareholder from the Interior Alaska community of Minto with a degree in geology and over ten years of experience in the industry, provides support to Tectonic Metals and other mineral exploration companies.

Doyon Ltd. is seeing a resurgence of mineral exploration on its lands across Interior Alaska, especially on gold properties held by the Alaska Native Claims Settlement Act regional corporation.

Running the breadth of Alaska between the Brooks Range to the north and Alaska Range to the south, the Doyon region blankets a mineral-rich swath of Alaska's Interior that is nearly the size of Texas.

Doyon itself, owns 12.5 million acres of land within this vast region, making it the largest private landholder in the state and one of the largest in North America.

"We selected many of our properties ... because of mineral potential," Doyon President Aaron Schutt said during Sept. 17 online breakfast presentation hosted by Resource Development Council for Alaska.

Over the nearly 140 years since sourdough prospectors first found gold in the streams of Interior Alaska, nearly 30 million ounces of this precious metal has been recovered from the hills and streams across the Doyon region. Most of this aurum has been recovered from Alaska's section of the Tintina Gold Belt – a 125- by 750-mile province that arcs from northern British Columbia, through the famed Klondike and White Gold districts in the Yukon, and across the Doyon region.

Several multi-million-ounce hardrock gold deposits have been discovered across the Tintina Belt – Coffee and White Gold in the Yukon; Fort Knox, Pogo, and Livengood in the Doyon region; and Donlin Gold on lands owned by Calista, the Alaska Native corporation for the Yukon Kuskokwim region of Southwest Alaska.

And there is compelling evidence that lands owned by Doyon may host other multi-million-ounce gold deposits the region is renowned for and the Interior Alaska ANCSA corporation has become proactive in exploring this latent potential.

"We are really excited about the partnership and work being done on Doyon lands," said Schutt.

The forging of the increasingly strong partnership between Doyon and Tectonic began shortly after Kaminak Gold Corp. sold the roughly 5-million-ounce Coffee Gold project in Yukon's section of the Tintina Gold Belt to Goldcorp Inc. (now Newmont Corp.) in 2017 for C$520 million.

Following the sale of Coffee, several of Kaminak's executives teamed up with Curt Freeman, a renowned Alaska geologist, formed Tectonic to further explore the Tintina Belt, especially Alaska's portion of the gold-rich province.

In 2018, Tectonic and Doyon signed milestone agreements that cover every stage that might be reached on these properties, from exploration through mine development and production. These discovery-to-production agreements for Seventymile and Northway provide surety to everyone, including a future partner who might want to mine the deposits of gold and other metals discovered.

While historical exploration carried out more than two decades ago demonstrated big gold potential at Seventymile and Northway, tough market conditions cut short past programs before this prospectivity could be fully realized.

Leveraging the data generated by past exploration, Tectonic began systematic exploration on both properties.

The novel coronavirus outbreak, however, created uncertain markets that threatened to once again slow gold exploration on Doyon lands.

In an unprecedented deal that was good for both parties, Doyon invested US$1.5 million (C$2.1 million) to acquire 10.5 million Tectonic shares and warrants to increase its Tectonic shareholdings in the future.

This deal that closed in April, strengthened the already close partnership and provided Tectonic the capital to continue exploration during the global social and economic upheaval brought on by the COVID-19 pandemic.

Schutt said there were several reasons behind Doyon's decision to become a strategic partner and the single largest shareholder of Tectonic.

"We saw the work they have done with the First Nation communities in the Yukon, just across the border; we saw the geologic success and the creativity they have on their team; and we talked about ways to get more done on Doyon land, and that resulted in Doyon making a direct investment in Tectonic in April of 2020," he said during the Sept. 17 RDC breakfast presentation.

For Tectonic, this financing provides 2020 exploration funds in a tough market and strengthens its bonds with a major landholder and stakeholder in Alaska.

"We are honored and excited to have Doyon as a shareholder and partner as we continue our endeavor to be a pioneering mineral exploration company committed to high standards of environmental stewardship, early and ongoing community engagement, and maximizing social and economic benefits to the communities in which we live and operate in," said Reda.

In July, Tectonic was able to raise another C$4.9 million (US$3.7 million) to further fund its Alaska exploration.

Doyon currently owns a 16.5% equity interest in Tectonic and has the option to increase this ownership to 19.99% through the exercise of warrants it holds.

To ensure Doyon and its other shareholders get the best return on its investment, Tectonic explored the two most advance gold properties in its portfolio – Seventymile and Tibbs – this year.

Situated between two prolific placer gold mining districts – Yukon's Klondike to the east and Alaska's Circle Mining District to the west – Seventymile is a large land package where previous exploration has shown the potential for multiple gold deposit.

While gold has been identified across the breadth of this Doyon-owned property, the 8,000-meter-long Flume trend is one of the most intriguing targets at Seventymile.

With new geological ideas, Tectonic carried out early staged exploration at Seventymile during the 2018 and 2019 field seasons in preparation for initial rotary air blast drilling this year.

Tectonic and Doyon are both excited to see the results from this program that are slow to be returned from the labs due to COVID-19 protocols and an upsurge in exploration.

"Just like everyone else in the industry, we are waiting on assays – they are very slow compared to normal times across the industry," Schutt said.

Tectonic, however, has received the first batch of results from drilling at Tibbs, a gold exploration project on state lands in the Doyon region.

Slightly more than half of the 3,202 meters of RAB drilling Tectonic carried out at Tibbs targeted Michigan, a zone where 2019 drilling by Tectonic cut 28.95 meters averaging 6.03 g/t gold.

Highlights from this drilling at Michigan include:

Owning properties immediately adjacent to Tibbs, Doyon has more than just a financially vested interest in Tectonic's success on these Alaska mining claims.

Doyon and Tectonic further strengthened their partnership with a long-term exploration, development, and production lease on 65,600 acres of Doyon lands adjacent to or near Tibbs.

These new properties include Carrie Creek, 15,800 acres of Doyon lands divided in two blocks immediately north and south of Tibbs, and Mount Harper, a 49,800-acre polymetallic exploration property about 10 miles southeast of Tibbs.

"The acquisition of three prospective properties at Carrie Creek and Mt. Harper represents another forward shift in the game for Tectonic as we ramp up our exploration activity in Alaska's Goodpaster Mining District," said Reda.

Much like the two properties Tectonic previously leased from Doyon, there has been no exploration at Carrie Creek and Mount Harper in more than two decades. Tectonic believes the new geological models it has successfully applied at Tibbs, combined with modern day exploration techniques, can unlock the potential of these newly acquired properties.

Carrie Creek, which consists of two land packages north and south of Tibbs, host at least three styles of gold mineralization reminiscent of the high-grade gold at Northern Star Resources' nearby Pogo Mine, lower grade bulk tonnage gold similar to Kinross Gold's Fort Knox mine near Fairbanks, and mineralization similar to what Tectonic is exploring in Michigan zone at Tibbs.

Previous exploration work on the property, focused on the skarn and porphyry mineralization, consisted of prospecting, sampling, and a four-hole drill program completed in 1981.

Historical grab samples of skarn mineralization at Larsen Ridge contained up to 7.2% tungsten. Other rock samples contained up to 1.39% copper and 1,045 parts per million molybdenum. A rock sample collected from Airplane Ridge at Mount Harper contained 42 ppm silver, 7,170 ppm lead, and 3.74% zinc.

Intrusion-related gold mineralization was also identified at Mount Harper near the end of exploration carried out in the 1990s, but no follow-up work has been completed there in more than two decades.

For Tectonic, the addition of these properties goes beyond the mineral exploration potential they have to offer.

"The Carrie Creek and Mt. Harper properties not only represent a broadening of the exploration territory available to us and the creation of a district-scale opportunity for Tectonic, but also a further strengthening of our already close partnership with one of Alaska's leading Native regional corporations, Doyon," said Reda.

For Doyon, the lands leased to Tectonic goes beyond the cash payments and potential future royalties from mining.

Schutt said contributions toward educational programs for shareholders is a mandatory component of any natural resources deal on Doyon lands.

A US$10,000 per year scholarship for Doyon shareholders was part of the lease agreement for Carrie Creek and Mountain Harper, and similar deals were agreed upon for Seventymile and Northway.

The ANCSA corporation also encourages educational opportunities for shareholders outside the classroom.

"We really like to see our shareholders as interns and working on the projects," said Schutt.

Above and beyond the exploration on the four properties leased by Tectonic, Schutt said several other Doyon properties – Vinasale, Flat, Ida Creek, LWM, East Wiseman, and LWM – are attracting the interest of mineral explorers.

Flat – Located in a placer gold-rich district about 60 miles southwest of Vinasale, Flat covers 22,000 acres considered to be the likely lode source of two creeks – Flat and Otter – that are estimated to have produced more than 830,000 oz of placer gold since 1909. When you add in other creeks in the Flat area, this total is more than 1.3 million oz of alluvial gold.

Sawtooth – Situated just north of the Elliott Highway about 65 miles northwest of Fairbanks, the more than 50,000-acre Sawtooth property hosts several prospects with the potential to be the type of gold deposit for which the Tintina Gold Belt is renowned.

Ida Creek – Located near the community of Huslia, Ida Creek is in an area of Alaska that has produced roughly 500,000 oz of placer gold. 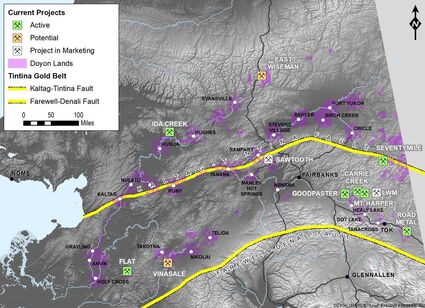 LWM – Located about 35 miles west of the Taylor Highway in Alaska's Fortymile Mining District, LWM hosts 14 known carbonate replacement-style occurrences along a 50-mile trend. The most of advanced of these is the LWM deposit, where 86 core holes have defined a more than 1,000-meter-long zone of zinc-rich carbonate replacement mineralization.

East Wiseman – Situated just five miles off the Dalton Highway, East Wiseman covers the Chandalar Copper Belt, a region where around a dozen volcanogenic massive sulfide, skarn and porphyry copper prospects have been identified. Luna, a VMS prospect at East Wiseman, has been traced along a three-mile trend.

In-depth information on Doyon and its mineral properties in Alaska can be read at Doyons vast Tintina Gold Belt potential in the May 2019 edition of North of 60 Mining News.