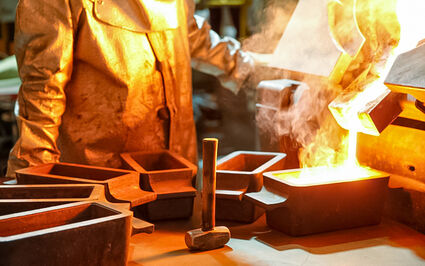 Gold being poured at the Fort Knox Mine north of Fairbanks, Alaska. This operation is expected to be a key contributor to Kinross' strategy to increase its companywide annual gold production to 2.9 million ounces by 2023.

With the price of gold at the threshold of US$2,000 per ounce and expected to climb higher, Kinross Gold Corp. plans to increase its global gold production by 20% over the next three years.

And upping the gold output at its Fort Knox Mine a few miles north of Fairbanks, Alaska is expected to be a key contributor to this plan.

Currently on pace to produce roughly 2.4 million oz of gold this year, Kinross is advancing a production growth strategy that is forecast to boost the company's annual gold output to 2.7 million oz in 2022 and 2.9 million oz in 2023.

This forecast increase in gold output represents additional ounces enabled by planned life-of-mine extensions and projects resulting from investments the company has made in its portfolio over the past three years.

The increased gold production at Fort Knox is expected to come from enhancements to the mine plan, which includes accelerating production at the Gilmore project to bring ounces forward.

Kinross broke ground on Gilmore in August 2018 and expects to have the project complete in the coming weeks.

A feasibility published for the Gilmore expansion during the second half of 2018 envisions nearly all of the gold mined from Gilmore will be recovered via heap leaching, a process that involves stacking the ore on a lined pad and using a mildly acidic leaching agent trickled over the ore to dissolve the gold into a solution that is pumped through a facility that recovers the gold.

This method of gold recovery has been employed at Fort Knox since completion of the Walter Creek Heap Leach facility at the project more than a decade ago. To accommodate ore mined from Gilmore, crews are constructing the new Barnes Creek heap leach pad at Fort Knox.

Kinross says Gilmore remains on schedule and the first ore from this expansion project is already being stacked on the existing Walter Creek heap leach pad.

The new Barnes Creek heap leach pad, where 95% of the ore mined at Gilmore is expected to be stacked, remains on target for completion by the end of this year.

"The Gilmore project is proceeding very well, on time and on budget and we continue to find efficiencies and capitalize on opportunities, such as mine plan and equipment optimization," said Atchison.

During a Sept. 21 presentation at the Gold Forum Americas conference, Kinross Gold President and CEO Paul Rollinson said the company has a plan to recover more Gilmore gold earlier in the mine plan.

The company did not provide any guidance as to how much more gold Fort Knox will contribute to Kinross' anticipated 500,000 oz/year increase by 2023. Further details of Kinross' three-year increased gold production strategy, however, are expected from the company's management team in late October.