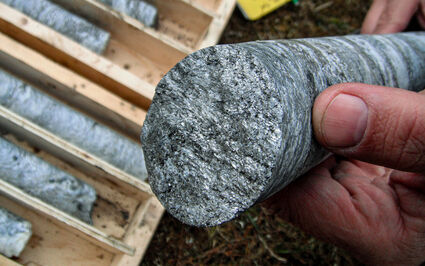 Core from drilling at Graphite Creek, a western Alaska deposit that hosts 8.2 million metric tons of the graphite needed for lithium-ion batteries and other industrial applications.

Graphite One Inc. Oct. 1 said President Donald Trump's declaration that the United States' heavy reliance on foreign nations for critical minerals is a national emergency highlights the importance of the company's plans to establish a domestic graphite supply chain by developing a mine at its Graphite Creek deposit in Alaska.

The U.S. is 100% dependent on imports for graphite, which is currently the primary anode material in the lithium-ion batteries that power smartphones, laptops, electric vehicles, and stores power from intermittent renewable energy sources.

China produces over 60% of the world's graphite and almost all the world's production of high-purity graphite needed for rechargeable batteries.

To address America's heavy dependence on imports for graphite and many of the other 35 minerals deemed critical to the United States, Trump signed "Executive order on addressing the threat to the domestic supply chain from reliance on critical minerals from foreign adversaries" on Sept. 30.

In the order the President says, "a strong America cannot be dependent on imports from foreign adversaries for the critical minerals that are increasingly necessary to maintain our economic and military strength in the 21st century."

Graphite, rare earths, gallium, and barite were specifically named as examples of critical minerals in which the U.S. is heavily dependent on China for its supply.

Trump said the heavy dependance on imports for these and other critical minerals makes the U.S. vulnerable to adverse foreign government action, natural disaster, or other supply disruptions.

"I therefore determine that our nation's undue reliance on critical minerals, in processed or unprocessed form, from foreign adversaries constitutes an unusual and extraordinary threat, which has its source in substantial part outside the United States, to the national security, foreign policy, and economy of the United States. I hereby declare a national emergency to deal with that threat," Trump penned in the executive order.

"All of us at Graphite One welcome this clear statement of the critical importance of graphite," said Graphite One CEO Anthony Huston.

A 2017 preliminary economic assessment outlines plans for a mine at Graphite Creek that would produce roughly 60,000 metric tons of 95% graphite concentrate per year and a separate processing facility to refine these annual concentrates into 41,850 metric tons of the coated spherical graphite used in lithium-ion rechargeable batteries and 13,500 metric tons of purified graphite powders annually.

Those purified powders may go into some interesting high-tech and industrial products – stealth coatings, synthetic semiconductor diamonds and fire suppressing foams, to name a few – thanks to some unique properties of the graphite found in this western Alaska deposit.

This mine and refinery could establish the front end of a domestic supply chain that feeds graphite to the electric vehicle, renewable energy, technology, and other sectors of the U.S. economy.

"Our goal of developing a supply chain solution – from our Graphite Creek Mine to our advanced graphite manufacturing plant – is aimed at addressing the dangers identified in the new executive order, and providing a critical material essential to all of the major sectors of the 21st century economy," said Huston. "As Graphite One owns a 100% interest in the largest known and highest grade graphite deposit in the United States, we are uniquely positioned to benefit from the action the U.S. government is taking to ensure Americans and its technology manufacturers can rely on a safe and secure source of graphite to power our next generation of power and technology needs."