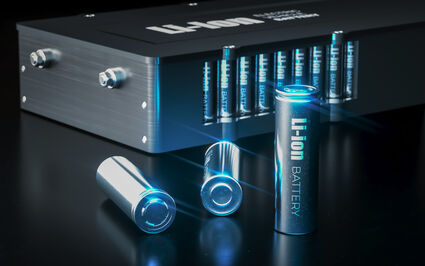 Cobalt is a critical battery metal that provides stability to the cathodes of lithium-ion batteries.

Whether it is the exponential growth in electric vehicles traveling global highways, the massive need for storing energy at solar and wind electrical generating facilities, or cutting the cords on our electronic devices, the world is becoming increasingly dependent on lithium-ion batteries.

And this is driving up the demand for cobalt, a critical safety ingredient in the cathodes of these energy storage cells.

"Globally, the leading use is in the manufacture of cathode materials for rechargeable batteries – primarily lithium-ion, nickel-cadmium, and nickel-metal-hydride batteries – which are used in consumer electronics, electric and hybrid-electric vehicles, energy storage units, and power tools," the United States Geological Survey wrote in the cobalt section of a 2018 report on critical minerals.

The projected massive growth in cobalt demand is further complicated by the fact that cobalt is seldom mined as a standalone metal. Instead, this increasingly needed battery metal is typically produced as a byproduct at copper and nickel mines. This means that any future cobalt mines would likely need to consider the economics of the moneymaking metal in the deposit.

"This situation limits producers' flexibility in adjusting the amount of cobalt mined in response to changes in demand and can result in periods of oversupply or shortage," according to the USGS.

While at lower prices, the cost to recover cobalt from copper or nickel mines may not have been economically viable, the demand electric vehicles are putting on this metal has mining companies taking a closer look at the feasibility of recovering cobalt from copper deposits in the United States.

This also has mineral exploration companies such as Ambler Metals Inc. penciling in the economics of recovering any cobalt contingent from their Alaska projects.

Another impetus to take a closer look at cobalt in Alaska and across the U.S. is that more than 70% of this increasingly important battery metal is currently mined in the Democratic Republic of Congo (DRC), an African country rife with political instability, poverty and social ills.

"This country has a high-risk index for doing business owing to poor infrastructure, resource nationalism, a high perception of corruption, and a lack of transparency as well as wars," USGS wrote about DRC in a 2018 report on cobalt.

This creates a dilemma for electric automobile manufactures and their customers.

While Amnesty International believes EVs have an important role to play in curbing climate change, they are urging carmakers to consider the human costs associated with the cobalt that goes into these vehicles.

Coupled with pressure from socially conscious EV drivers, this call for ethical batteries has automobile and lithium-ion battery manufacturers looking for solutions, including less cobalt-intensive recipes for cathodes.

Tesla, which sold roughly 367,500 cars and dominated the U.S. luxury vehicle market during 2019, is among the EV manufacturers developing cathode chemistries that require less cobalt.

The lower percentage of cobalt going into each battery, however, will not offset the massive volume of batteries being produced. This has EV and battery manufacturers racing to the mines to ensure they have the socially and environmentally responsible supplies of this battery metal.

Early in 2019, Tesla cut a deal to buy cobalt from Glencore Plc, the world's largest producer of this battery metal.

Samsung SDI, a South Korean lithium-ion battery manufacturer, also cut a deal for Glencore cobalt. Under the terms of this supply contract, Glencore will provide up to 21,000 metric tons of cobalt contained in cobalt hydroxide between 2020 and 2024.

In Europe, BMW Group secured a deal for 100 million euros worth of cobalt from Managem Group, a Moroccan mining company the German automaker selected for its sustainable and ethical mining practices.

Managem will supply about 20% of BMW's cobalt needs over the next five years, the balance will come from Australia.

"Cobalt is an important raw material for electromobility. By signing this supply contract with Managem today, we are continuing to secure our raw material needs for battery cells," said Andreas Wendt, member of the BMW Board of Management responsible for purchasing and supplier network.

Tesla CEO Elon Musk hinted that his company may form closer bonds with mining companies as it seeks to secure its rapidly growing need for cobalt and other battery materials.

"We might get into the mining business. I don't know," Musk said. "We'll do whatever we have to ensure that we can scale at the fastest rate possible."

Ambler Metals' Bornite copper deposit in Northwest Alaska's Ambler Mining District may help supply Tesla and its battery cohorts with a sustainable source of North American cobalt in the future.

Knowing that the carbonate-hosted mineralization at Bornite carries cobalt, Trilogy Metals began looking into the viability of recovering this battery metal as a by-product of the copper there.

According to a calculation completed in 2018, Bornite hosts 6.4 billion pounds of copper and 77 million lb of cobalt.

Metallurgical work shows promise that a cobalt concentrate could be produced at Bornite, which is a good indication that a future mine there could produce the battery metal as a byproduct to the copper.

Bornite is not the only carbonate-hosted copper target in Alaska with cobalt potential.

According to a study by U.S. Geological Survey and the Alaska Division of Geological & Geophysical Surveys, most of the Brooks Range where Bornite is found has the potential to turn up similar cobalt-enriched copper deposits.

A couple of carbonate-hosted copper targets on the southern slopes of the Brooks Range about 100 miles northwest of Bornite – Omar Peak – have interesting cobalt credits.

Less is known about the cobalt content at Peak, but the mineralogy shows similarities to Omar.

In all, the USGS and DGGS has identified a belt extending more than 300 miles along the south slope of the Brooks, and the entire north slope of this range that extends across the breadth of Alaska, is prospective for carbonate-hosted copper deposits that could contain cobalt.

The federal and state geological agencies also ranked the Nome Complex on the Seward Peninsula as highly prospective for these types of deposits.

The Nome Complex consists of a roughly 2,500-square mile area immediately northeast of Nome and a separate, slightly smaller area about 30 miles to the north.

The geology of the copper enriched deposit found in the Nome Complex is not well understood but USGS geologists have drawn some comparisons to the carbonate-hosted copper deposits and prospects in the Brooks Range, about 200 miles to the northeast.

A span of the Wrangellia Terrane that blankets PolarX Ltd.'s Alaska Range property is another area USGS and DGGS see as a good place to look for cobalt-bearing copper deposits.

In addition to carbonate-hosted carbonate deposits, Alaska is also home to platinum group metal-nickel deposits with decent amounts of cobalt.

The Wrangellia Terrane, a belt of rocks that arcs along the southern slopes of the Alaska Range eastward through southern Yukon and into western British Columbia and Southeast Alaska, is prime hunting grounds for these PGM-nickel-cobalt deposits.

The most advanced PGM deposit along the Wrangellia Terrane is Nickel Creek Platinum Corp.'s Nickel Shäw in the Yukon.

There are intriguing signs that similar PGM-nickel-copper-cobalt deposits could be lurking in the Alaska portion of the Wrangellia, such as the Man property about 180 miles northwest of Nickel Shäw.

Pure Nickel, which explored Man about a decade ago, said that a review of drilling shows that all holes that cut the Eureka zone encountered disseminated sulfide mineralization with strikingly similar grades along seven kilometers (4.5 miles) in the central part of a longer trend of mineralization known as the Alpha Complex.

Despite the property's promise, Pure Nickel relinquished the state mining claims covering Man to save money during the downturn in mineral exploration markets.

Besides Man, numerous PGM-nickel and potentially cobalt prospects are found along a roughly 200-mile section of the Wrangellia Terrane in Southcentral Alaska.

Amphitheater, which borders the Man property to the south and west; Butte Creek, located about 40 miles southwest of Amphitheater; and Talkeetna, a block of claims roughly 30 miles further along this cobalt prospective arc on the south side of the Alaska Range.

The Southeast Alaska Panhandle may be the most prospective area for cobalt in the state. USGS has even asked whether the silver-rich veins at Hecla Mining Company's Greens Creek Mine on Admiralty Island could also contain cobalt.

This query of the potential of cobalt at Greens Creek is not unfounded, considering that a historical mine produced cobalt, nickel, and copper from a rich deposit just a few miles to the northeast.

While there is little information on the amount of cobalt produced at this mine that went into operation in 1895, referred to as Funter Bay Nickel and Perkovich Cobalt, there is evidence that rich deposits of the battery metal remain. 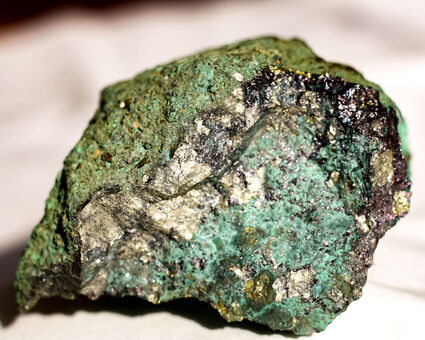 A sample of copper- and cobalt-rich mineralization from the Bornite deposit on Ambler Metals' Upper Kobuk Mineral Projects in Northwest Alaska.

This rich store of metals is worth more US$31 billion based on May 2020 metal prices, but is currently locked up in a park.

More information on this rich northwestern B.C. deposit can be read at It is time for a new look at Windy Craggy in the June 5, 2020 edition of North of 60 Mining News.

About 70 miles southeast of Windy Craggy, Constantine Metal Resources Ltd. has identified rich VMS deposits on its Palmer project that are similar to those found at Windy Craggy.

While Palmer is better known for the zinc, copper, gold, silver, and barite, the property northeast of Haines, Alaska also hosts intriguing hints of cobalt.