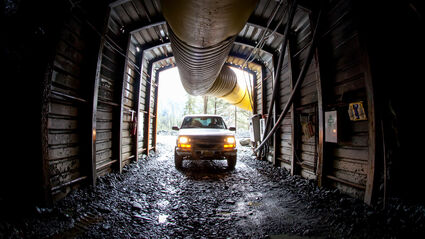 A production-sized ramp provides underground access to the Lookout deposit, which hosts the bulk of the resource at the Niblack copper-gold-silver-zinc project in Southeast Alaska.

Restructured and under new leadership, Heatherdale Resources Ltd. is gearing up for a drill program to expand some of the high-grade targets at its Niblack copper-gold-silver-zinc project on Prince of Wales Island in Southeast Alaska.

Heatherdale, which had advanced Niblack to the brink of considering the feasibility of mining the high-grade volcanogenic massive sulfide mineralization found there, became hampered by debt during the economic hardships endured by the junior mining sector in 2008 and again in 2012.

Rob McLeod, a geologist noted for his work in Alaska, British Columbia, and elsewhere, cut a deal earlier this year to breathe new life into this company that has laid dormant for the better part of a decade.

Blackwolf Copper and Gold Inc., an agent for McLeod and others, has agreed to assume roughly C$4 million that Heatherdale owes Hunter Dickinson Services Inc. In turn, Heatherdale issued Blackwolf 35 million shares to settle C$3.4 million of that debt.

This debt restructuring provides Heatherdale a clean balance sheet that will allow the company to attract the new capital needed to unlock Niblack's value and acquire new interests.

This creative deal also provides McLeod with 11.4% of Heatherdale's stock, making him the single largest shareholder of the company.

Further details of this deal and plans for Heatherdale moving forward can be found at McLeod brings new vision to Heatherdale in the June 26 edition of North of 60 Mining News.

After completing a share consolidation and raising C$5.8 million in August, the renewed Heatherdale is now prepared to carry out the first drill program at Niblack in nearly a decade.

This resource does not include step-out drilling completed at the Trio zone in 2012.

"Subsequent to the last drilling program at Niblack in 2012, relogging, mapping, age dating and compilation efforts have resulted in a significant geologic reinterpretation of the mineralizing system, opening multiple areas to target for exploration and resource expansion " said Robert McLeod, President and CEO of Heatherdale.

Slated to begin by mid-November, the drilling carried out by Heatherdale before the end of this year is expected to involve 3,000 meters of surface and underground drilling to target extensions of Lookout, which host the bulk of this resource, as well as extensions of the historic Niblack Mine, the source of very high-grade ore produced at the onset of the 20th century.

"The new structural interpretation at the historic mine, which direct-shipped high-grade copper ore and the down-dip extension of the Lookout Zone are compelling targets; in both areas, we will be following up on previous, high-grade copper, gold, silver and zinc drill results. Finally, step out drilling at the Lookout Zone will be completed with the objective of expanding mineral resources," said McLeod.

Heatherdale says a geologic reinterpretation of the host-rock units, together with radiometric age-dating, suggests that high-grade VMS-style mineralization outcropping along the shoreline adjacent to the historic Niblack Mine, is hosted within an overturned antiform- (upward convex) type fold. This structure appears to plunge to the east, suggesting to Heatherdale geologists that the mineralization is wide open for expansion along trend and plunge from the historic stopes and high-grade historic intercepts.

Heatherdale plans to drill at least four initial holes in the historic mine area.

Extensions of the Lookout deposit, which can be accessed through a production-sized underground ramp driven in the 2000s by previous operators, are also on the docket for drilling this year.

The massive sulfide mineralization running through the core of Lookout can be as much as 100 meters thick and averages around 15 meters, making it potentially amenable to bulk underground mining methods.

One of the areas to be tested this year is the potential down-dip continuation of this thick zone.

In addition to the historic Niblack Mine and deposits that host the current resource, several other mineral occurrences have been identified along a prospective rhyolite sequence that extends for at least three miles across the property.

Toward this goal, drilling at Lookout will step out from previous underground hole U074, which cut 1.5 meters averaging 2% copper, 3.25 g/t gold, 23.3% zinc and 90 g/t silver. Heatherdale said this intercept is stratigraphically underlain by a broad interval of enhanced gold, silver and zinc that is interpreted to be a proximal geochemical signature that could develop into another significant massive sulfide zone.

The purpose of initial drilling in this area of Lookout is to vector towards large accumulations of mineralization.

Underground drilling is also planned to step-out from the current resource, targeting a significant gap in drilling to the west that has potential to add significant tonnage at above average grades. Drill holes will target a 100- by 75-meter area adjacent to wide and high-grade mineralization previously encountered through drilling at Lookout.

Due to the size of this Lookout extension target, additional step-out holes will also be completed targeting this area during early 2021.

CORRECTION: The copper grade for the Lookout and Trio inferred resource is 0.81%. The inferred copper resource grade was incorrect in the original article and was corrected on Jan. 6, 2021. North of 60 Mining News apologizes for any confusion.