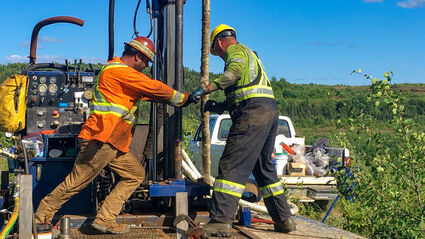 As a private company, Western Alaska Copper & Gold Company has done a great job steadily advancing the multiple precious and base metals deposits and targets across its 34,000-acre Illinois Creek Mining District property in western Alaska. Given the success of this work, especially a 2020 program that indicates the viability of resuming operations at the historic Illinois Creek gold-silver mine, management is taking the exploration company public on Canada's TSX Venture Exchange.

This soon-to-be publicly traded company will offer investors exposure to a wide variety of metals at various stages of development – from gold and silver already stacked on a heap leach pad and unmined precious metals deposits at the past producing Illinois Creek Mine, to a large but relatively early staged porphyry copper-gold system at Round Top that could stand on its own as a flagship for a TSX Venture Exchange-listed company.

"One of the many strengths of the Illinois Creek district is the presence and ongoing discovery of a series of deposits with varying metals. This gives WAC&G the flexibility to focus on what's economically robust at any given time," Western Alaska Copper & Gold CEO Kit Marrs told Mining News earlier this year.

Given the rising prices and positive outlook for precious metals, Western Alaska is currently focused on the near-term and high-grade gold potential offered by reestablishing an operation at Illinois Creek.

While neither company has explicitly mentioned delivering high-grade gold ore from Illinois Creek deposits to the mill at Kinross Gold Corp.'s Fort Knox Mine, an intriguing statement made by a Kinross executive indicates that such an arrangement may make sense for both companies.

During a question and answer session on Kinross' new strategy of using the Kinross mill to process ore from other Alaska deposits, Kinross Gold Chief Technical Officer Paul Tomory said "the company has also considered using barges to transport ore on Alaskan rivers to Fort Knox."

Lying alongside the Yukon River, Illinois Creek is a project that would make sense to fill this consideration.

While it is yet to be seen whether Illinois Creek would deliver ore to the Kinross Alaska mill, Western Alaska Copper & Gold is advancing the project as if it would be an independent operation. This includes a 2020 program that took a closer look at recovering the already mined gold and silver sitting on the heap leach pad and looking for extensions of the oxidized deposits previously mined.

During its 2020 program, Western Alaska drilled more than 70 reverse circulation holes aimed at gaining a better understanding of the quantities of gold, silver, and copper on the heap leach pad.

"Because this material is already mined and stacked, it will be less expensive to process than the open pit ore and should enhance the economics of the project by producing a significant cash flow at a low capital cost," according to the company.

While drills defined the amount of economic enhancing metals on the heap leach pad, Western Alaska completed a soil sampling program to look for extensions of the unmined Illinois Creek deposits.

Using a combination of the new soil samples taken this year and a compilation of historic drilling and soil data by Piek Exploration, a company founded by Joe Piekenbrock, who now serves as the chief exploration officer for Western Alaska Copper & Gold, the company has identified a 1,000-meter-long untested area of the main gold-rich Illinois Creek structure that has been offset by a fault to the northeast.

"Drilling will be needed to test this structure, but it could add a significant near-surface open pit resource," Western Alaska penned in a summary of its 2020 program.

A preliminary economic assessment that is expected to show the viability of both reprocessing the material on the heap leach pad and mining extensions of the Illinois Creek deposit is slated for completion in 2021.

Road to the Yukon

In an effort to enhance the economics of a new Illinois Creek Mine, as well as exploration and development of the other gold, silver, copper, and zinc projects across the wider Illinois Creek District property, Western Alaska is investigating a road that links the property to the Yukon River.

In 1995, the Alaska Industrial and Economic Development Authority published a prefeasibility study for building an industrial grade road along an already established 26.5-mile winter trail linking the Illinois Creek mine to the Yukon River. From here, the Yukon River serves as a superhighway to the Pacific Ocean to the west or to Alaska's rail and road system via a river port at Nenana, which is about 50 highway miles south of Fairbanks.

After discussions with AIDEA about establishing a road along this route, Western Alaska met with John Wood, a former AIDEA engineer, and Steve Rowland, a civil engineer at Alaska-based Recon LLC who specializes in mining access roads, about updating the design.

With the goal to map out the most efficient and cost-effective route for the Illinois Creek to Yukon River access road, Rowland investigated the route contemplated by AIDEA and made adjustments to take into account current best engineering practices and avoid wetlands where practicable.

Recon is finalizing the route alignment and materials estimate, which can be used to solicit construction cost estimates that can be used in the Illinois Creek PEA.

Access to the Yukon River would provide a lower cost means of delivering equipment, fuel and supplies to a future Illinois Creek Mine, as well as for the exploration and development of the other targets across the mineral-rich district.

It may also provide a means of delivering gold-rich ore to the Yukon River if Illinois Creek turns up as a project Kinross considers as viable for using barges to transport ore on Alaskan rivers to Fort Knox.

While completing the work needed to consider reestablishing a mine at Illinois Creek is currently Western Alaska's primary focus, the larger property hosts numerous other targets that warrant further investigations.

Honker, a potential source of high-grade gold ore about six miles north of Illinois Creek, is one such target.

The Illinois Creek District property also hosts Round Top, a large porphyry copper deposit about 10 miles northeast of the past producing mine.

Last year, Western Alaska completed 1,536 meters of infill at this porphyry that drew geologists to the area in 1980.

In addition, major zinc-lead-silver carbonate replacement deposits have been found adjacent to both Illinois Creek and Round Top.

Based on its own drilling and calculations, Anaconda Minerals estimated Waterpump to host 166,000 short tons of historic resource averaging 9.5 ounces per ton silver, 16.1% lead, and 5.5% zinc.

TG and TG North, associated with Round Top, appear to be larger but likely lower grade than Waterpump. Surface samples at the more than 4,000-meter-long soil anomaly at TG and TG North have turned up grades as high as 1,203 g/t silver, 5.7% lead, 0.8% zinc. The handful of short holes drilled there have returned grades higher than 5% zinc-plus-lead over more than 20 meters.

Two holes drilled by Western Alaska in 2018 confirmed that TG North represents an excellent base and precious metal exploration target. 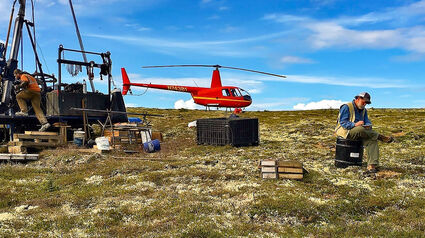 With Western Alaska working toward reestablishing a mine at Illinois Creek and so much exploration potential to follow-up on across the wider property, Western Alaska's board of directors has requested that the privately held Alaska-based company explore an initial public offering on Canada's TSX Venture Exchange.

To assist in this pursuit, the company has appointed Catalin Kilofliski as director of corporate development.

Kilofliski has extensive expertise in mining, senior management, capital markets and corporate development within several publicly listed junior exploration companies. Most recently, he served as the director of corporate development for Tudor Gold Corp and was instrumental in growing that TSX Venture Exchange-listed company from C$30 million to more than C$500 million in market capitalization.