With Northern Star's Pogo Mine in the background, crews test the Aurora gold target with the eighth hole of the 2020 season.

Millrock Resources Inc. and Resolution Minerals Ltd. Dec. 13 announced the completion of the 2020 exploration at 64North, and preliminary plans for the 2021 program at this large land package adjacent to Northern Star Resources Ltd.'s Pogo gold mine in Alaska's Goodpaster Mining District.

Since entering into an exploration agreement with Millrock late in 2019, Resolution has invested more than US$5 million in exploration at 64North and has indicated that it plans to make the US$50,000 cash payment and issue 10 million shares to earn a 30% initial interest in Millrock's more than 163,000-acre (66,000 hectares) 64North project.

Overall, Resolution has the option to earn up to a 60% interest in 64North by investing US$20 million in exploration, plus paying US$200,000 in cash and issuing 38 million in Resolution shares to Millrock over four years.

Upon earning a 60% interest on the entire 64North project, Resolution will have the option to increase its interest on one of the 64North blocks to up to 80% by funding a feasibility study for the selected block and funding Millrock's portion of mine development, in the form of a loan.

The 2020 exploration focused primarily on West Pogo, where the partners built a road for access to the Aurora gold target, completed ground and airborne geophysics, and 4,778 meters in nine holes.

Resolution and Millrock began testing Aurora at West Pogo in March but before the second hole could be completed the program was suspended to allow crewmembers to fly home ahead of COVID-19 travel mandates.

Both holes encountered anomalous gold along with bismuth, arsenic, and tellurium indicative of Pogo-style mineralization but not the high-grade gold the 64North partners were seeking.

Drills resumed turning in June, and by September the partners had completed an additional five holes in three West Pogo targets– Aurora, Echo, and Reflection.

The final hole, 20AU07, cut a seven-meter quartz vein within a 22-meter-thick zone of intense sulfides, alteration, quartz veining, and anomalous gold values in the Central zone at Aurora.

Resolution reports that multiple zones of quartz veining and intense alteration were intersected in both holes. Assays from these recently completed holes are expected in January.

"We are pleased to have been able to execute this exploration program despite the additional risks and challenges posed by COVID," said Millrock Resources President and CEO Greg Beischer. "A strong initial drill test of the West Pogo prospects was completed, and new drill targets were defined at other prospects on this district-scale gold project. We look forward to pending assay results and developing exploration plans for 2021."

These plans are expected to include 2,000 meters of initial drilling on the East Pogo claim block, where previous exploration had identified high-grade gold-bearing quartz veins at the Boundary target. 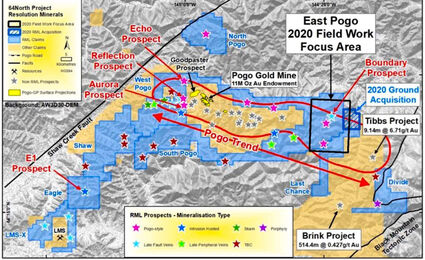 "The identification of shallow 50- to 150-meter Pogo-style drill targets as a result of our extensive field work in 2020 at the East Pogo Block, along strike from historic high grade drill intersections of up to 35 g/t gold, is very encouraging and has been the driver to snap up 19 new claims," said Resolution Minerals Managing Director Duncan Chessell. "The East Pogo Block is sandwiched between the Pogo gold mine to the west and the Tibbs project to the east on the high-grade gold endowed Pogo trend and will be a focus for shallow drilling next season."

In addition to the programs at West and East Pogo, the 64North partners completed preliminary exploration – including geophysical surveys, road construction, trenching, and sampling – on the Eagle, North Pogo, and Divide claim blocks.