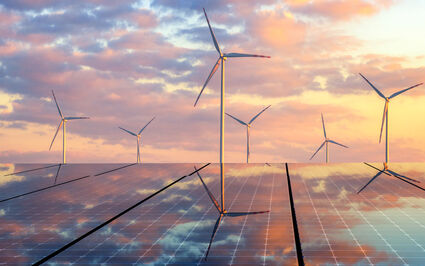 The rapid expansion of renewable energy infrastructure in the U.S. is pushing up the demand for an array of critical minerals needed for wind and solar power generation and storage.

Wind turbines, solar panels, and the batteries that store the electricity these renewable energy sources generate are creating new demands for an array of minerals and metals, many of which are not mined in the United States.

Recognizing that mines lie at the front end of America's expanding renewable energy supply chains, federal officials have determined that critical mining projects must be eligible for Fast-41, a program established in 2015 to improve the timeliness, predictability, and transparency of federal environmental review and authorization process for domestic infrastructure projects.

Short for Title 41 of the Fixing America's Surface Transportation Act, Fast-41 established the Federal Permitting Improvement Steering Council (FPISC), a federal entity meant to provide a one-stop-shop capable of coordinating permits across different federal agencies, thereby streamlining and shortening the overall process for large infrastructure projects that are eligible for the program.

Mining projects that supply the materials needed for the energy, communication, and transportation infrastructure in the U.S. may be eligible for Fast-41, thanks in large part to Alaska Gov. Mike Dunleavy's nomination of two proposed critical mineral mines in Alaska – Bokan Mountain rare earth element project near Ketchikan and Graphite Creek project north of Nome – as high-priority infrastructure projects.

This inclusion into Fast-41 could help reduce the seven to 10 years its takes the average large mining project in the U.S. to get through the permitting process, which is good news for domestic solar panel, wind turbine, and battery manufacturers concerned about their heavy reliance on imports for the minerals and metals needed to build America's renewable energy infrastructure.

"As the front end of our supply chain, American mining is key to successfully repairing our nation's infrastructure so including mining projects among those covered by Fast-41 is an important first step in addressing permitting delays that have plagued the mining industry for years," said National Mining Association President and CEO Rich Nolan.

The U.S. depends on imports for more than half of its needs for 46 minerals and metals, which includes 17 for which it is 100% reliant on foreign sources, according the United States Geological Survey.

Many of the minerals and metals not mined in the U.S. are critical to building America's renewable energy and electrical vehicles sectors.

Problems related to complete reliance on imports for materials vital to renewable energy could be exacerbated by the skyrocketing global competition for these minerals and metals.

FPISC Executive Director Alex Hergott said the American Wind Energy and Solar Energy associations have expressed concerns about reliable supplies of the minerals and metals needed by their member companies. This concern weighed on the decision to make mining eligible under Fast-41.

"So, the fact that moly (molybdenum) for wind or the other 25 elements that are needed for solar panels, that we would not add the feedstock for renewable energy under conventional energy as an infrastructure item is somewhat asinine to me," he said during a late 2019 presentation at the American Exploration & Mining Association's Annual Meeting in Nevada.

Alaska happens to host rich deposits and promising prospects of most of these energy minerals and metals not produced in the U.S. Rare earths and niobium needed for wind turbines and electric vehicles; gallium and indium used to manufacture solar panels; and graphite and vanadium used in the batteries for grid-scale energy storage are among the critical renewable energy metals found across the Last Frontier.

At the end of 2019, when Hergott's introduced American miners to Fast-41, the more than a dozen federal agencies that are members of FPISC were considering the potential of including mining as eligible for the permit streamlining program.

In addition to the mineral supply concerns expressed by the solar and wind energy associations, the permitting council was being prompted by states with undeveloped mine projects that host some of the minerals these renewable energy sectors need.

The Alaska governor's graphite and rare earth nomination letters also sent a strong message that mining projects are the foundation of America's infrastructure sector and should be eligible for Fast-41.

With a Jan. 15 vote by members of the FPISC, mining projects now are.

Made up of members from more than a dozen federal agencies, FPISC sits outside and above the other agencies as a coordinating element.

"It doesn't have any jurisdiction over any organic statute but what we do is bring all those federal elements together to adjudicate disputes and cut the BS," FPISC Executive Director Alex Hergott said during a December presentation at the American Exploration & Mining Association's (AEMA) 2019 Annual Meeting in Nevada.

"Within 60 days of being on this council we send a team to fly down to the project. We get all the state, tribal, county and city zoning individuals – all the federal elements that in many cases have only known each other over email for 20 years – we sit them around a table," Herrgott said.

This accomplishes much of the permit streamlining Alaska Sen. Lisa Murkowski, R-Alaska, has been advocating for over the past decade.

"I welcome this announcement, which will ensure that mining projects benefit from the permitting transparency and accountability that many other major projects already receive," Murkowski said. "Minerals are essential to infrastructure, yet our country is deeply dependent on foreign sources for everything from rare earths to cobalt. Reasonable steps like this one will help us change that and ultimately turn our mineral security from a weakness to a strength."