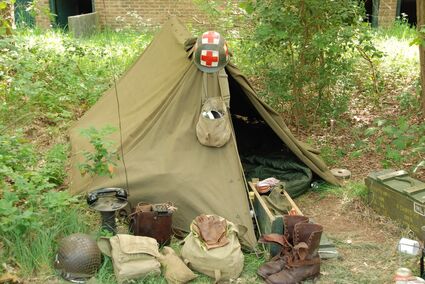 An antimony fireproofing compound that was applied to tents and vehicle covers saved the lives of countless American troops during World War II.

Best known for its ability to resist heat and corrosion, antimony is in a wide array of consumer goods – from paints and plastics to batteries and wind turbines. This critical mineral is also used to make clearer glass for smartphones, computer screens and solar panels.

"Today, antimony is used in lead-acid storage batteries for backup power and transportation; in chemicals, ceramics, and glass; in flame-retardant materials; and in heat stabilizers and plastics," the U.S. Geological Survey inked in the antimony section of a 2018 report on minerals critical to the United States.

In addition to being a vital ingredient in a wide array of consumer products, this heat and corrosion resistant metal is strategically important to American defense.

Despite having significant reserves of stibnite, the primary antimony mineral, the U.S. depends on other countries, primarily China, for 84% of its supply of this critical mineral.

"China continued to be the leading global antimony producer in 2019 and accounted for more than 60% of global mine production," USGS inked in its 2020 Mineral Commodity Summaries report.

"History – along with today's trade headlines – demonstrates the risk inherent to this dynamic," Marks wrote.

Due to this dynamic, coupled with the metal's traditional and emerging applications, USGS recently ranked antimony as the No. 10 most critical mineral to the U.S. when it comes to supply risk.

Marks agrees with antimony's ranking near the top of the USGS critical minerals supply risk list.

"The threat has been around for generations, and it's no less prevalent today than it was 75 years ago when Japan invaded China and cut off the United States from its main source of antimony," the retired general penned.

Alaska has stepped up to meet America's strategic antimony needs in the past and hosts rich deposits of the heat resisting metal that could help fill current and future critical needs.

When combined with a halogen – fluorine, chlorine, bromine, or iodine – antimony trioxide suppresses the spread of flames. In addition to safety clothing, tents, toys, aircraft, and automobile seat covers are among the products imbued with antimony trioxide's life-saving flame resistance.

"Antimony is also vital to our military's effectiveness and has been since it was labeled as crucial to the war effort during World War II," wrote Marks.

This is largely due to the lives of countless American troops that were saved during the war due to an antimony fireproofing compound that was applied to tents and vehicle covers.

In addition to its widespread heat-resistance applications, antimony imparts increased hardness and mechanical strength into an alloy known as antimonial lead.

The majority of this antimony is recycled, which accounts for essentially all of America's supply of the metal that is not imported.

A liquid-metal rechargeable battery developed at the Massachusetts Institute of Technology (MIT) in Cambridge contains healthy amounts of antimony.

This battery, also known as a molten-metal battery, uses an alloy of lead and antimony as the anode (positive electrode); liquid lithium the cathode (negative electrode); with a lithium salt electrolyte in between. All these liquids are stored in a single tank without the need for dividers because, like oil and water, they have different densities and do not mix.

Such large batteries must also be inexpensive and durable. Scientists at the Massachusetts Institute of Technology believe the molten-metal battery may be the answer.

The Ambri battery has a calcium alloy anode, and a cathode made of antimony particles. As the battery discharges, a calcium-antimony alloy is formed and during charging the antimony and calcium separate.

At room temperature, Ambri's cell is non-conductive and its active materials are solid metals and a solid electrolyte. Once heated to operational temperature, the charge-discharge cycle maintains the heat needed for the process – eliminating the need for auxiliary heating or cooling. According to the company, these batteries are less expensive, last longer and are safer than their lithium-ion counterparts.

These antinomy-calcium batteries could be the answer to delivering renewable electricity when the sun is not shining or the wind is not blowing, a key to making green energy practical on a grander scale.

"It has long been known that stibnite, the sulfide of antimony and the principal source of that metal, is widely distributed in Alaska," Alfred Brooks penned in a 1917 report, Antimony deposits of Alaska.

Brooks' early 20th century investigation identified 67 stibnite occurrences in Alaska, most of which are found in areas also rich in gold – Nome, Fairbanks, and Iditarod.

While roughly 100 tons of ore from mining shipped from Sliscovich in 1914 and 1915 contained about 35% antimony, the value of the gold and silver in this ore outweighed the critical mineral.

In fact, while the World War 1-era mines near Nome were shipping out antimony, larger loads of higher-grade concentrates were sent from mines around the Interior Alaska city.

"In 1915 antimony ore was mined on four properties in the Fairbanks district at the Scrafford, in Treasure Creek basin; the Stibnite, in Eva Creek basin; the Gilmer, in Vault Creek basin; and at Chatham Creek mine," Brooks wrote. "All the operations were on a small scale and consisted chiefly of open cuts. The total shipments of stibnite from the district during 1915 were 685 tons, which probably averaged 58% antimony."

Scrafford, the most prolific of these Fairbanks area stibnite mines, has been estimated to produce 2,700 tons of ore containing greater than 50% stibnite over the years.

"The Scrafford antimony deposit is affiliated with an east-west, south-dipping shear zone of the same name that can be followed for at least six miles (10 kilometers)," Barker, who is a manager for Treasure Creek Partnership, told Mining News.

Millrock Resources Inc. recently secured exclusive option to acquire Treasure Creek. This company is likely most interested in the Fort Knox-like gold potential this property has to offer.

Drilling at Treasury Creek in the 1990s encountered a large gold zone with grades similar to what is being stacked on the heap-leach pad at the neighboring mine. 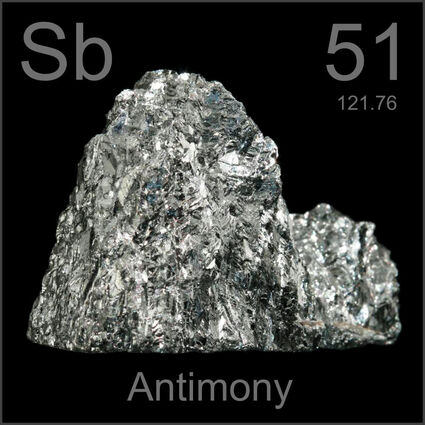 The Tok Antimony, also known as Stibnite Creek, deposit was first mined in 1914 and was set to ship ore during World War II. The stockpiles mined from an open pit there, however, were washed away by the river and never made it to market.

While this exploration work did not turn up the world-class gold deposits the Aussie companies were seeking, this area still hosts the antimony deposits that drew miners to this eastern Alaska locale in the first place.