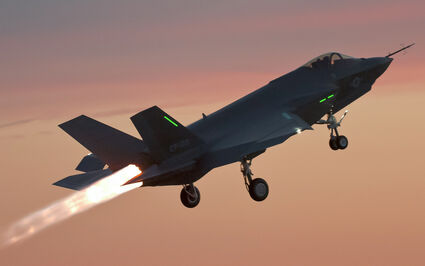 Rhenium lends its exceptional heat and wear resistance to alloys used to build the turbine engines of US military aircraft.

Rhenium is exceptionally resistant to heat and wear, characteristics that make it a vital ingredient in superalloys used in jet and industrial gas turbine engines.

"The high-temperature properties of rhenium allow turbine engines to be designed with finer tolerances and operate at temperatures higher than those of engines constructed with other materials," the United States Geological Survey penned in a fact sheet on the critical metal. "These properties allow prolonged engine life, increased engine performance, and enhanced operating efficiency."

According to the USGS, the average rhenium abundance in the earth's crust is less than one part per billion, making it one of the rarest elements on the periodic table.

This extreme scarcity, coupled with the heat resistance this metal offers to superalloys used the jets that keep commercial and military aircraft airborne, are among the reasons the USGS places rhenium on its list of 35 minerals and metals critical to the United States.

While exceptionally rare and never found in concentrations to mine as a standalone metal, rhenium is often found clinging to molybdenum in the porphyry deposits that supply most of the world's copper. One such deposit in Southwest Alaska encompasses enough rhenium to supply America's current rhenium needs for nearly a century.

Roughly 47,000 kilograms, or 47 metric tons, was used in the United States during 2019. While this is nearly equal to all rhenium produced globally last year, USGS says the supply-demand ratio is tipped to slight oversupply. This is due to increased recycling of jet turbine blades, which need to be replaced about every ten years, adding to global supplies

Roughly 80% of the rhenium consumed in the U.S. last year went into turbine engine components.

The higher rhenium content alloys and limited supply pushed the price of rhenium to a high of US$10,600 per kilogram, or US$10.6 million per metric ton before the markets crashed in 2009.

While rhenium prices have since dropped to around US$1,300/kg, the aerospace sector continues to seek out more abundant and lest costly alternatives, which has added some uncertainty to the future demand of the superalloy metal.

"The major aerospace companies ... were expected to continue testing superalloys that contain one-half the quantity of rhenium used in engine blades as currently designed, as well as testing rhenium-free alloys for other engine components," USGS penned in its 2020 Mineral Commodity Summaries report.

The federal geological survey, however said the demand for the catalyst-grade rhenium used to produce lead-free, high-octane gasoline, which accounted for about 15% of U.S. rhenium consumption last year, remains high.

To sate its appetite for rhenium, the U.S. produced around 8,400 kilograms of this critical mineral domestically during 2019. Most of the balance was imported from Chile, Germany, Kazakhstan and Canada.

While the overall rhenium concentrations in copper-dominant porphyry deposits tends to be low, usually less than half a gram per metric ton, the large tonnage mined from this type of deposit makes it possible to recover economically viable quantities of the critical mineral.

Considering rhenium is one of the rarest stable elements on the periodic table, this is an enormous store of the critical metal. By way of comparison, the USGS calculated the total amount of rhenium in global resources at 11 million kg at the end of 2019. This means Pebble has singlehandedly bolstered the world's known rhenium resources by roughly 38%.

"It is in the United States' best interest to develop reliable and long-term domestic sources of mineral commodities like copper, gold, molybdenum, silver, rhenium and palladium – strategic metals that are critical to the country's economic, energy, military and industrial future," said Pebble Partnership CEO Tom Collier said. "It is equally important to source these minerals from jurisdictions that are known to be leaders in environmental protection, in conserving healthy fish and wildlife populations, as well as in environmental justice and human rights. That description fits Alaska to a tee and is one more reason why Pebble is poised to become one of America's leading metals producers."

"(R)ecent delineation of the giant Pebble porphyry copper-molybdenum-gold deposit in Alaska ... suggests that there is the potential for significant rhenium resources in undiscovered porphyry copper deposits in Alaska," the USGS penned in a 2018 rhenium report.

This deposit, situated on lands owned by NANA Regional Corp. and being advanced by Ambler Metals Inc., a 50-50 joint venture partnership between Trilogy Metals Inc. and South32 Ltd., already hosts roughly 6.4 billion lb of copper and 77 million lb of cobalt, both important metals in electric vehicles.

It is believed that Bornite may also host important concentration of rhenium, germanium, and gallium. USGS entered into a technical agreement with Trilogy to better understand the deposits potential for these critical minerals.

The USGS also hopes to extrapolate what it learns at Bornite to widen the potential of critical byproducts metals in other Alaska copper deposits.

While mines at deposits like Pebble have the potential to fill America's foreseeable critical rhenium needs for decades to come, it takes a special process at the refinery to recover a usable form of this metal from the molybdenite. 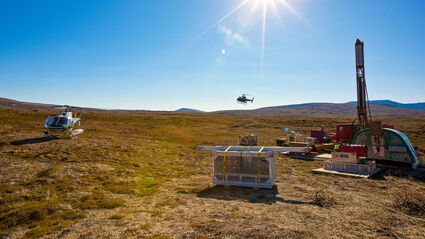 Pebble hosts 9.3 million pounds of rhenium in all resource categories, making the Southwest Alaska deposit the largest store of this durable critical metal ever found.

Most of the rhenium sold is in the form of ammonium perrhenate, a powder that is precipitated from the solution scrubbed from the refinery flues.

Freeport-McMoran Copper & Gold's Sierrita refinery in Arizona recovers rhenium from molybdenite concentrates from the company's own mines as well as third party concentrates.

Rio Tinto's Kennecott Mine, on the other hand, sends byproduct molybdenite concentrates from its Bingham Canyon Mine in Utah to Mexico to pull out the rhenium, which is then shipped to Chile for purification.

For the U.S. to take advantage of the rich deposits of rhenium found at Pebble and other domestic deposits, additional refineries capable of recovering this critical metal will need to be developed.