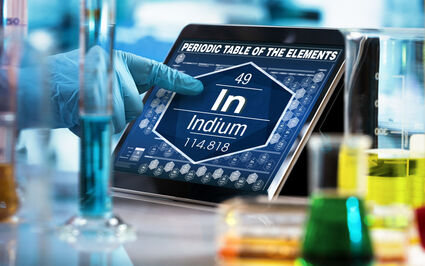 Indium-tin oxide is used as a transparent conducting film applied to virtually every touchscreen computer, tablet, and smartphone on the market.

While indium is not part of the everyday lexicon, if you are reading this article on your smartphone, computer or tablet there is a very good chance you are looking at (or more accurately, through) indium right now.

This is because indium-tin oxide is used as a transparent conducting film applied to virtually every flat-panel display and touchscreen computer, tablet, and smartphone on the market. This thin coating transforms incoming electrical data into an optical form, a property that makes touchscreens touchable.

Flat panel displays and touchscreens account for more than half of the indium consumed globally. While each of these devices only need a small amount of indium-tin oxide, the massive quantity of touchscreen devices with liquid crystal displays adds up to a lot of this metal.

In addition to the strong adherence to glass that contributes to indium's use on electronic displays, this silvery metal is highly reflective, making it an ideal ingredient for an energy saving coating on architectural glass on high-rise buildings.

The biggest new market driver for indium may be thin-film photovoltaic solar cells, which are emerging as a more popular choice for delivering low-carbon residential and commercial electricity.

One such driver is copper-indium-gallium-selenide (CIGS) solar cells that can absorb much more sunlight than traditional cells, which means that a much thinner film is needed. These thinner cells can be applied on flexible materials and are less expensive to produce.

Despite these advantages, CIGS solar panels are less efficient at converting electricity than their more rigid silicon-based counterparts. As such, CIGS only make up about 2% of the solar panel market. This is expected to climb as researches continue to improve the efficiency of solar cells with copper-indium-gallium-selenide semiconductor material.

CIGS cells have reached 22.9% efficiency in labs and several technological advancements are underway to further increase its efficiency. Analysts predict sharp sales growth for these cheaper to produce and more environmentally benign cells as efficiencies rise.

Indium phosphide lasers and receivers are now being used in 3G, 4G and 5G fiber-optic networks that have data transmission speeds of greater than 10 terabits (10 million bits) per second and transmission distances of more than 3,100 miles (5,000 kilometers).

While telecommunications and solar are exciting new and growing uses for indium, they have yet to move the demand dial for the metal. USGS estimates that indium consumption in the U.S. was around 110 metric tons during 2019, which is down about 12% from 2018.

America imported 100% of its indium needs last year. Roughly 36% of this supply came from China, 22% from Canada, and about 11% from Korea. This complete import-reliance is somewhat paradoxical to the byproduct indium being shipped from one zinc mine in America's 49th State.

Alaska does not get much credit as a domestic source of indium and it is nearly impossible to calculate exactly how much of this critical mineral is produced there.

This is because the indium that is mined in Alaska is a byproduct in the zinc and lead concentrates shipped from Teck Resources Ltd.'s Red Dog Mine in the northwest corner of the state. As a result, this indium is credited to the refineries that extracts the metal from concentrates – primarily Teck's Trail Operation in British Columbia.

While the value of the indium contingent in Red Dog concentrates pales in comparison to the zinc and lead, it is believed to be significant in terms of global markets for the critical mineral.

Teck Resource CEO Don Lindsay has previously noted that Trail could easily deliver 75 metric tons of indium annually, which is nearly 70% of all the indium used in the U.S. last year.

A large portion of the refinery's zinc concentrates come from Red Dog, though it is unclear if this contributes to Trail indium output.

In addition to the zinc-rich sedimentary exhalative deposits (SEDEX) in the Red Dog region, a number of places around Alaska could provide future supplies of indium.

One place critical mineral Alaska explorers should look for indium is in tin-bearing "specialized granites" and these rocks are found all across the state.

The Lost River and Kougarok tin regions on the Seward Peninsula in far western Alaska are areas particularly rich in these granites. 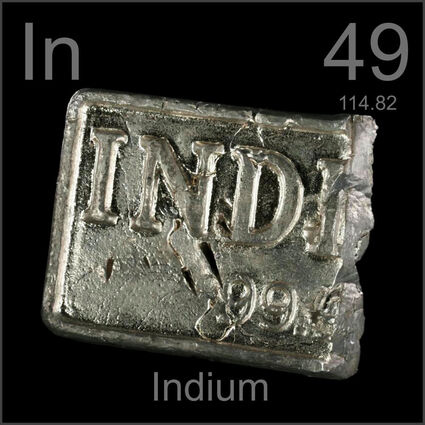 Using a geospatial tool developed in cooperation with Alaska Division of Geological & Geophysical Surveys, USGS identified at least nine other areas to search for tin deposits that may have indium associated with them.

"In addition to the known tin province in the Lost River–Kougarok belt of intrusive rocks on the Seward Peninsula, areas that have high potential for tin-tungsten-molybdenum-tantalum-indium-fluorspar deposits associated with 'specialized' granites also are widely scattered across Alaska," USGS and DGGS penned in a 2016 Alaska critical minerals report.

For more information on these high-potential critical mineral areas, see Tin is the glue for the tech revolution in this magazine.